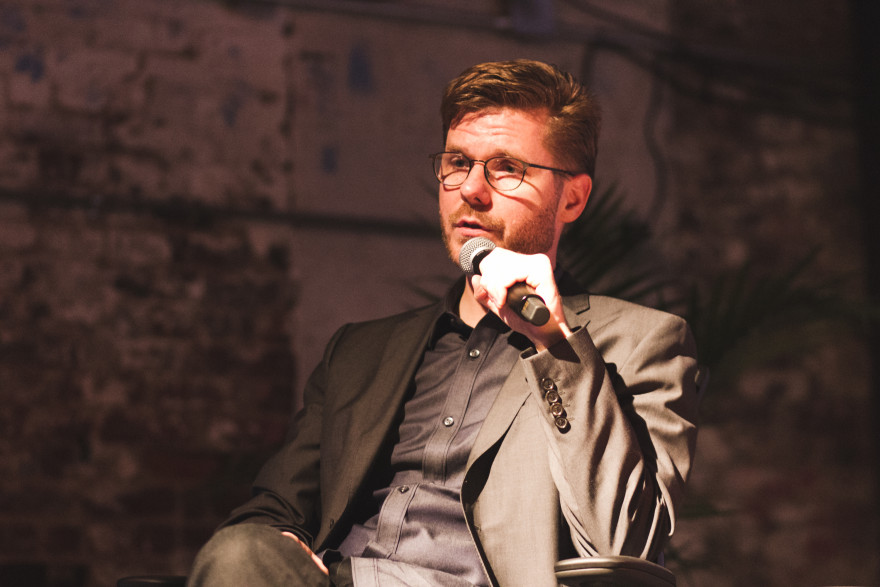 At our 2015 two5six conference we hosted a number of exciting conversations between leaders of the games industry and other industries. Our last dialogue went deep into our understanding of space and space exploration. One of the speakers, Torfi Frans Olafsson, is Creative Director for EVE Universe IP for the expansive MMO Eve Online; he sat down with us before his panel to talk about space, the scale of the Eve universe, and the essence of digital interactivity.

Torfi, do you feel like it’s easier or more difficult to digitally create the environment of space with how little, relatively, we know about space at this time?

Well, I mean, I think it’s easier because it gives you a better chance to be the inventor. That said, we know a lot about space, we just don’t know about the little green men living on other planets. But it’s interesting but we’re here, we talked a little about the Kepler Mission which searched for extrasolar planets that discovering so much just right now I wouldn’t say it’s invalidating this stuff. Eve was conceived in the late nineties, but so far the discoveries have only confirmed what we guessed.

What milestones of space exploration do you think we’ll see in our lifetime?

It’s really difficult to say. It’s kind of depressing, you know, the whole moon thing, where lunar astronauts are slowly dying away. No one living has ever been there. We need something like the Cold War to straighten things out. [laughter]

I guess the Cold War was very inspiring, you could say, in the Space Race.

Exactly, the Second World War and the Cold War, it’s horrible. But it might be just someone like Elon Musk. But unless there is something done about propulsion, of course, we don’t see any travel outside of the Solar System, any man travel outside of the Solar System. And same with Mars. There has to be a good reason for us to go there. It’s easier to send a robot right now. In fact, it’s easier to send a robot to kill an alleged “terrorist” on the other side of the world. People are getting lazy now.

Do you think robots are going to take over?

The Singularity! Probably. I don’t know if it’s going to happen in our lifetime.

we didn’t anticipate the scale of the alliances

What about the way that people interact with EVE Online or the community has surprised you the most?

The thing that has surprised us the most is the scale—the scale and the cleverness. And I mean this applies for every game developer or something like that: Don’t underestimate your audience, don’t underestimate the intellect of your players. The intellect of your players is at least equal if not more than your own, and when you combine a bunch of them together—and I mean a bunch like a hundred-thousand brains together—in a collected hive mind, they’ll always outsmart the developers. So, we didn’t anticipate the scale of the alliances. We didn’t anticipate the large battles. I remember sitting in a room and we were thinking (we were going over the art budget, like how many ships you could see on the screen) how many people are going to be on the screen at the same time? Thirty, forty, something like that? And it became hundreds and thousands. And the players reaction was that they were furious. They thought we were just incompetent assholes because we made such a horrible game where you couldn’t have like five thousand people on the screen.

But in your best hopes you didn’t imagine you would have these huge scale battles.

No, we designed it differently. But once we create an open universe and allow people to interact and they have a reason to interact, which is very important, we’ve seen worlds where you design and can create anything you want and there’s no reason for you to do it, or there’s no theming, those often fall flat on their face. But when there’s a reason, be it to conquer space, or just to be popular, like on Facebook,  if there’s a reason the mass then will just, you know, go for it.

Was that interactivity something that you were cognizant of when you were first starting with EVE in its infancy?

Totally. It was inspired very much by behaviour that we observed in the MUDs of the 90’s where emergent behaviours, which included a simple group set, a nice simple group set, give it time and enough people that you would witness emergent behaviour, or highly complex emergent behaviour, like the foundation of villages and cities or complex organisms or something like that. If you just allow it to be. And it was also heavily inspired by Richard Dawkins and The Selfish Gene and his theory that, you know, vehicles with DNA will move forward. It’s all very meta. So, we didn’t just throw a bunch of assets together in Unity and be super surprised when people started playing it.

I think it definitely shows because it’s such an intricate game and people latch onto so many different aspects of it and become obsessed, not even with just the space travel, but its economies and businesses.

Oh yeah, definitely, and there are alliance leaders who pride themselves with not having logged into the game for three years. “Oh, I don’t play it.” And then they’re like on the phone and on the forums, controlling vast empires, kinda like Hyman Roth, the guy in The Godfather Part II, who’s back in Florida and just controlled the mob.

So, my last question is just whether you have any updates on Valkyrie, your VR adventure?

Oculus finally announced the date when it’s coming out. Valkyrie is designed for the Oculus Rift, so it’s getting close, it’s getting very close. We’re ready. We’ve been ready for a while. Valkyrie has been playable in a lot of conventions and shows, we’ve shown it at E3 2014 and we’re going to be showing it at E3 this summer. And each step of the way, it’s gone better of course. So it’s been kind of a blessing in disguise that Oculus kept pushing back the release date gave us more time to polish. It’s pretty good.