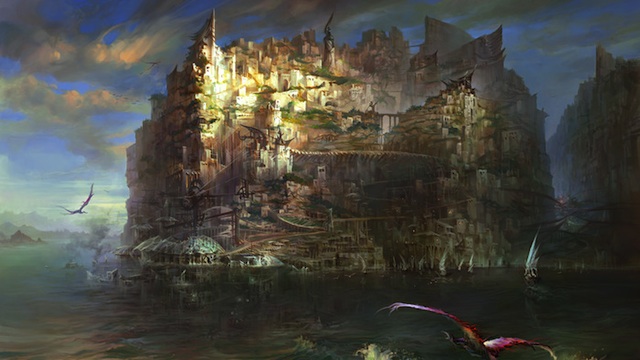 Not long ago, CRPG was an acronym you didn’t hear much anymore. Then, Kickstarter came along and the CRPG had its Rocky moment. And the latest runaway champion in the computer role-playing game comeback is Torment: Tides of Numenera.

Kicked and funded in mere hours, Numenera is a continuation of Torment: Planescape (1999), a game beloved and celebrated for its creative cascade, but which shamefully this writer hasn’t played. (Commence the throwing of stones!) However, one of our writers has, and last year Darshana Jayemanne wrote about the awesome ways in which Planescape busts stale conventions, like trolls drinking homebrewed mead, and sorcerous curmudgeons. So it should be no surprise that Torment generated $2 million in about a day or so.

Elves, dwarves and hobbits need not apply. Instead we meet such topsy-turvy characters as a chaste succubus, a lovesick hag, a loyal vizier, an interventionist angel and a philanthropic devil. Outrageously, Charisma is one of the most important stats: The Nameless One can often achieve far more through parley than force of arms. This is all for the best, as the combat is a bit terrible-the game’s forte lies in its thousands of lines of text, surrealist visual sensibilities and complex audio.

So far, so awesome, right?

This is where fantasy characters go at the end, when they ‘sail off into the West’ or are banished back to some netherworld. In Planescape all the tropes pile up like so much flotsam… Cook took the D&D legacy cosmology – ramshackle, irresponsible, magnificent – and revivified it in a way that was brilliant but not unprecedented: Planescape is to vanilla D&D what Moorcock’s Dancers at the End of Time (itself a Swinburne reference) is to Tolkein’s The Hobbit.

Mother of God. After reading that, it’s understandable how Tides of Numenera was funded so quickly. As much as I love a good RPG, a man can only intake so many orcs and elves before he starts buying liqueurs because they look like green potion and decorating his balcony with gargoyles. It does things to the brain.