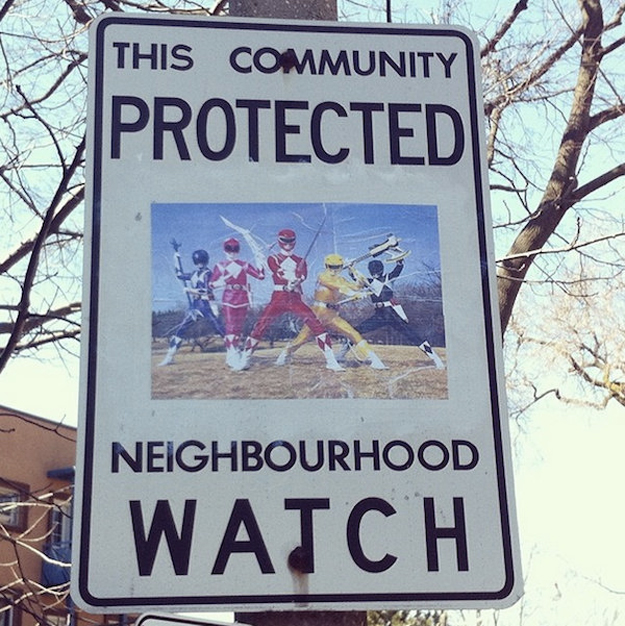 Neighbourhood Watch has long been a way for people to get involved with keeping their streets safe, but now those volunteers are getting a helping hand from superheros and other notable pop culture icons. Created by an artist who uses the pseudonym Andrew Lamb, signs around Toronto have been decorated with characters that include Wonder Woman, Spider-Man, Bruce Lee, and even the unlikely Chief Wiggum.

It all started two years ago, when Lamb noticed the houses printed on the neighborhood watch signs were starting to fade, which he decided to replace. His only criteria is that the characters have to come from his childhood, which for the 30-year-old artist was the 80s, and early 90s. Lamb works openly on the signs during the day, and is even happy to ask passersby for their input.

While most people love the revamped signs, the artist’s work still falls into a “legal grey area,” which is why he prefers to stay anonymous. Janet Sherbanowski, executive director of the Crime Prevention Association of Toronto that runs the Neighbourhood Watch program, told the National Post she is a fan of the alterations, which she calls “art installations.” She went on to add, “Anything that brings notice to our signs and our work is good.”

Other have shown their support, such as 37-year-old Toronto resident, Rina Espiritu, who said, “I grew up with comics. I think people can relate to that [fantasy] of ‘imagine that someone did land by cape to save you from an intruder or crime or injustice.’”

As you can imagine, there are already a number of altered signs around the city, but Lamb isn’t going to give away their locations any time soon because he likes the mystery of it all. In the meantime, you can take a look Lamb’s Instagram account, which has a fairly extensive collection of images. You’ll notice that some very strange TV characters made the list, but they have all lent their likeness is the name of keeping the city’s streets safe.