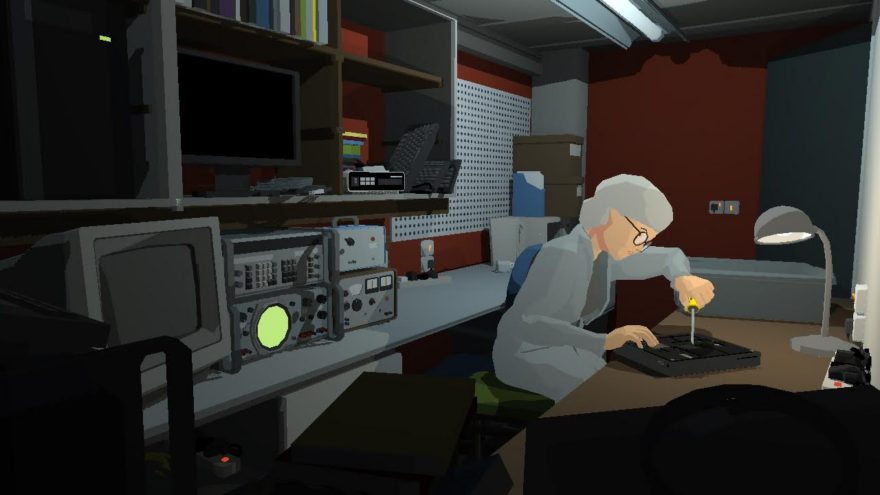 Nick Preston decided to call his upcoming series of short adventure games Toryansé after the Japanese folk song of the same name. The song is traditionally sung as part of a children’s game—Warabe uta, which is very similar to the English nursery rhyme game Oranges and Lemons—but has surprisingly dark lyrics thought to relate to a period of high infant mortality in Japan’s history. But it wasn’t only the song’s background that appealed to Preston, it was also the fact that it’s often played at Japanese traffic lights to indicate when it’s safe for pedestrians to cross.

“I loved the idea of layers of story being embedded in a part of everyday life, you could use a crossing every day and not realize,” Preston told me. This idea is what will unite each of his short games; threading a path between the mysterious and the mundane. The first one, due in early 2017, is called Reel and follows an elderly woman who runs a computer repair business in a small shopping arcade. The story starts when she receives a misaddressed package and sets off to find its intended recipient. In her exploration, the woman discovers the previous life of the building that she was unaware of, despite having worked there for years.

The stories that Preston intends to release after Reel will we built of the same material. “The core idea for each story is to show a character stepping outside of their normal, everyday routine and briefly experiencing something that makes them reassess, in some small way, the environment or people around them, then returning to normality feeling a little bit better,” Preston said.

To help realize his vision, Preston has been looking to the works of Studio Ghibli, especially My Neighbour Totoro (1988) and Whisper of the Heart (1995). He told me he has a shelf full of Ghibli’s “Art of …” books that  exemplify the idea of the mundane coexisting with the fantastical that he’s looking to achieve. He’s also been reading the short stories of Japanese writer Banana Yoshimoto, who he has been a longtime fan of, and hopes to capture even a fragment of her magic.

Yoko Ogawa’s Revenge collection of short stories has also been a big influence on Preston as “each story could stand on its own, but at the same time they all seemed to form part of a cohesive whole.” It’s these stories that convinced Preston to split Toryansé up rather than try to tell a single, larger narrative. What he enjoys about short stories are that, when compared to a novel, there is “less time spent on introductions and scene setting, less reliance on traditional structures and narrative arcs.” He added that he brings different expectations as a reader to a short story than to a novel: “I find I’m much less likely to expect an explanation for everything in a short story, or for it to have a neat and tidy ending. I’m hoping these concepts can be translated successfully to my short games.”

As Preston is a first-time game maker, working out how to realize his ambition with Toryansé has been met with a number of road blocks. Art was never a problem as his background is in 3D art, having hopped from doing a painting course in Belfast, to learning animation in Edinburgh, and then finally ending up doing visual effects at the National Film and Television School. And then, after blowing things up and covering people in fake blood, Preston’s life took a less exciting turn as he worked as a 3D generalist for advertising companies for a number of years.

He’d wanted to make games for a long time but has only been able to do so recently as the required development tools and software has become more accessible. It was Unity 3D that convinced Preston to give it a shot as it looked like the 3D software he’d been using for years. He struggled at first due to the coding requirements: “getting my artwork into the engine and up on the screen was excitingly easy, getting it to do anything after that was a real struggle.” But then he discovered PlayMaker, which replaces the lines of code with something more visually manageable. “A page full of numbers and curly brackets still absolutely baffles me but present the same thing as a few shapes connected with wavy lines and I seem to be okay,” Preston said.

An early animation test for Reel

Other than coding, a big challenge for Preston was writing—he simply didn’t feel confident enough in his writing ability, plus having text in the game complicated the localization process a lot. His solution was to make Toryansé wordless. “I also had an idea that removing the text allowed each individual player to have their own, more nuanced interpretation of what was going on,” he said, “graphical symbols and mime are more open to subjective assessment than words.” How to tell his stories without words has been a process of ongoing refinement.

Most recently, he’s been trying to focus on non-diegetic elements, believable interactions between the character and the world, all without even the typical adventure game fallbacks like inventory items and thought bubbles. “It’s a tricky balance to strike, on the one hand it emphasizes the feeling of sharing an experience with a character rather than controlling one, but on the other there’s the risk that players don’t feel engaged at all,” Preston said. “A benefit of splitting the game into smaller pieces is I can always adapt and change the interface to suit each character and story individually.”

Reel is being made as part of Northern Ireland Screen’s eXP Project. a scheme that allows creators to explore small, interactive experiences without needing to worry about their commercial prospects. The deadline for that is January 31st 2017 so Preston is hoping to have something ready by then. A Windows release is being prioritized, with Mac and Linux hopefully coming shortly after, and Preston hopes a touchscreen version is also possible.

You can find out more about Toryansé on its website.