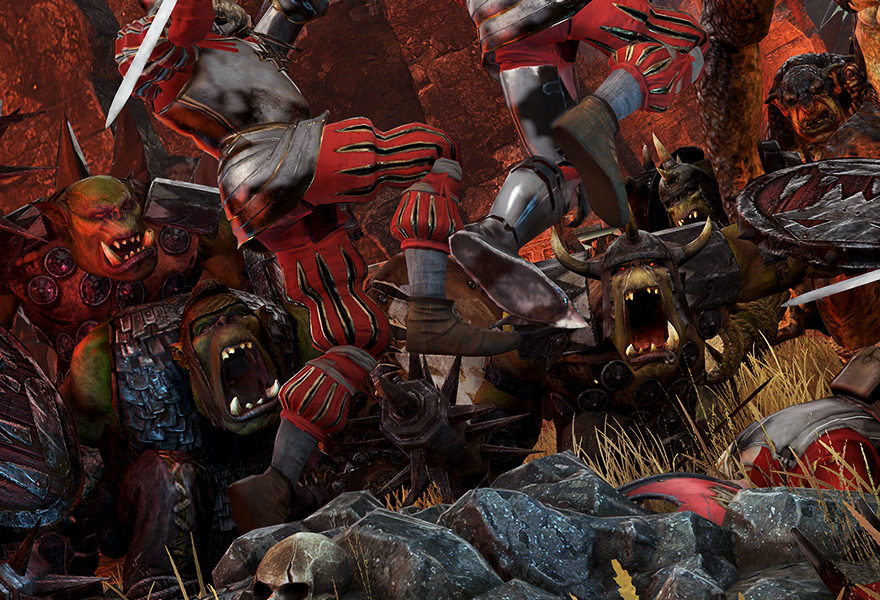 There was never a question of which faction I would be playing for my first run of Total War: Warhammer. The Vampire Counts were fun to dabble with, but their brand of corrupt-and-conquer worked a little too slowly for my tastes. The Dwarves, despite being the only race to master the helicopter while most of their neighbors are still working on crossbow technology, were too homogeneous for my taste. As for the Empire, if I wanted to play a vaguely Germanic and very mustachioed nation, I needn’t play a game about wizards and trolls.

The Orcs, with their ultra-aggressive playstyle, their mutilated cockney accents, their goblin-firing siege slingshots, have a special place in my heart as the only part of the Warhammer universe both horrifying and hilarious in equal measure. Besides, they were the army I always fielded in high-school, on my friend’s carpet. My whole brief history with wargaming is tied up with the Greenskins—how could I give up the chance to play them now?

Wargaming has a history that a small number of people argue over ferociously, in part because the definition of the word is unclear. Is chess a wargame? It certainly is a game about war, but diehards would say no—too reliant on abstraction and metaphor. An entire essay was written about the difference between a “wargame” and a “war game.” I will mercifully spare you the details.

In 1871, the French Army were trounced by the Prussians in an upset so severe, part of the blame was laid at the feet of a board game. Instructions for the Representation of Tactical Maneuvers under the Guise of a Wargame (IRTMW), as it was originally titled, was a strategy game prescribed to officers in the Prussian army by their superiors. But IRTMGW was about as fun as you would expect, with a list of rules so long that matches would often take longer than the battles it supposedly simulated. Eventually, someone slimmed it down enough to enjoy, and Kriegsspiel—which literally translates to “wargame”—was born, a recreational pastime so meticulously detailed that it functioned as a military training tool.

Kriegsspiel eventually entered civilian life, and the notion spread. In 1913, H.G. Wells wrote Little Wars, a game that could be played with common toy soldiers. The first and second World Wars provided a setting grander than the genre had ever had before; again and again, wargamers re-invaded Normandy in D-Day (1961) and directed the horrors of the Western Front in Trench (1975). By the time Games Workshop debuted Warhammer in 1983, wargaming had evolved into a formidable hobby. The genre of wargaming had been grounded in historical re-enactment, but fantasy was a natural next step.

A common throughline in discussions of wargaming is “complexity.” You’ll find that word crop up in almost all journalistic examinations of the hobby. Less charitable descriptors would be “byzantine” and “obsessive.” But that complexity which passersby seem happy to note but loath to examine doesn’t exist just to fill out codices: it is, in some ways, a dogged, tunnel-visioned pursuit of truth. And truth, as Oscar Wilde wrote, is rarely pure and never simple.

The mechanics of traditional wargames are not about creating depth of play (though that can be a side effect) as much as they are about verisimilitude. Panzer Leader (1974) had different movement rules for artillery over and under 88mm. Advanced Squad Leader (1985) systematizes wind strength, as it affects the density of smoke on the battlefield. Often, the preferred term was not games at all—the most powerful wargaming company, until Games Workshop came around, was tellingly named Simulations Publications.

But one of wargaming’s most interesting contributions to the strategy genre are the rules for morale, which dictate at what moment in a battle a squad will stop obeying your orders and try their damndest to escape harm’s way. Morale is systemized courage, the human spirit reduced to a stat or attribute, and it’s as revolutionary as it is convoluted. Imagine if a pawn would not move into position because it was frightened for its life. The goal of wargaming often seems to be a reduction of the world as we know it into measured sums. How many artillery shells can a man in the trenches take before breaking? It must be quantified.

churning with variables both above and below the surface

The Total War games are, in many ways, blood relatives of the wargaming world. They’re largely concerned with historical struggles and empire building, with the last two games in the series set during the Roman empire. Like wargames, they’re immensely complex, churning with variables both above and below the surface. In more recent Total Wars, the weather of a battle affects the accuracy of archers; fog makes the “spotting range” of units shorter. Fire spreads through settlements with frightful speed. Total War is also one of few large-scale strategy games where morale—that attempt to quantify bravery in the face of death—is vitally important.

The Total War formula mostly acts as a functional framework on which to construct the violent, mystical world of Game Workshop’s Warhammer. This is the most dramatic departure Creative Assembly has taken from their typical playbook with the series, and it needed to be; a game about a warring fantasy kingdom must feel different than one about the rise of the Roman empire. For the most part, it does. As the battle-crazed Orcs who use each other’s teeth as currency, I was unable to even access the trading menu. I couldn’t start in on my technology tree until late in the game, since the Orcs were too busy brutalizing each other to dip their green toes in military science. There were only a few places where the theming and mechanics grind against one another, and remind us that this formula was originally derived from a game about humans at war with one another—why the living races of Dwarves and humans would make alliances or trade agreements with the openly villainous Vampire Counts, for example, is beyond me.

I ran my commander Grimgor Ironhide through other Orc encampments like a dump truck with no brakes, leaving them ruined and smoking (though, strangely, no less ramshackle-looking than before I had passed through). I smashed armies against the teeth of the World Edge Mountain. Winning felt good with the Greenskins, and it bred more winning—get an army’s “fightiness” rating high enough, and you inspire a Waaagh, a fully stacked army that heard there’d be some good scrappin’ as long as they follow your Orcish lord around. It’s a great mechanic, a powerful carrot to tempt you into further violence and bloodshed even if it might not be the best strategic decision. Like the Dwarven book of grudges or the Vampire’s battlefield reanimation, it’s both flavor and function, a narrative told through systems.

My Waaagh took me deep into the Badlands, far from my capitol of Black Crag. I took province after province, hacking my way south until I had conquered nearly all the Greenskin pretenders. I was technically at war with five factions, and I was doing magnificently. My largest army was five turns away, when the Dwarves—who I’d knocked heads with not too long ago—showed up on my doorstep. By the time I got back to Black Crag, half of Grimgor’s empire had burned to the ground.

Even worse, all that time spent chasing off the dwarves let my Orcish rivals recover enough to challenge me for the territory I had claimed. Greenskins flowed up from the south, furious Dwarves from the North. By the time the Chaos Warriors arrived, bringing with them the end times, there wasn’t much left for them to do: my empire was consumed by the same war and bloodshed that had gotten me so far. It was honestly how you might expect the reign of an Orc warlord to end—carried away by his own thirst for further conquest and battle. It felt, if not real, truthful.

While simpler than some of its more Gordian cousins, the original table-top Warhammer (1983) applied wargaming’s obsession for simulation to the battles of elves, orcs, and vampires. Final Fantasy has never concerned itself with what might happen if a wizard channeling eldritch powers from beyond the stars were to, say, fuck up his pronunciation and lose control of a spell. Warhammer did, through a bureaucratic combination of dice and charts. By sketching out the boundaries of the universe through rules, and by taking itself so seriously as to approach parodic levels, Warhammer tried to make real a world of monsters and magic.

With Total War: Warhammer, wargaming eats its own tail. Like Warhammer in 1983 adopted so many methods of thinking previously reserved for the world of historical simulations, Total War: Warhammer uses the language of a game grounded in historical realism to tell a story of a mythic, imaginative world. In extraordinary and meticulous detail, the game recreates the landscape, politics and—did you catch it the first time?—war, as if its troubled fantasy world lived and breathed.

There is a trait that a few units possess called “Terror.” It’s easy to miss, lumped in with things like “Shielded” or “Poor Accuracy,” but it has a notably different effect. When a unit with Terror—such as the Varghulf, a massive, slavering bat-hulk which lopes across the field with disconcerting speed—first makes contact with enemy forces, it doesn’t matter what the state of their morale is; they will run. Warhammer’s world is sketched out by an ocean of rules, obsessed with the collision of fantasy with the specter of realism. At one end, terror is gut-wrenching emotion, a failing of spirit. At the other, terror is a rule, a factor to be considered. From the cold, complex, and baroque throne of wargaming, come full circle as it is in Total War’s latest entry, terror is both.