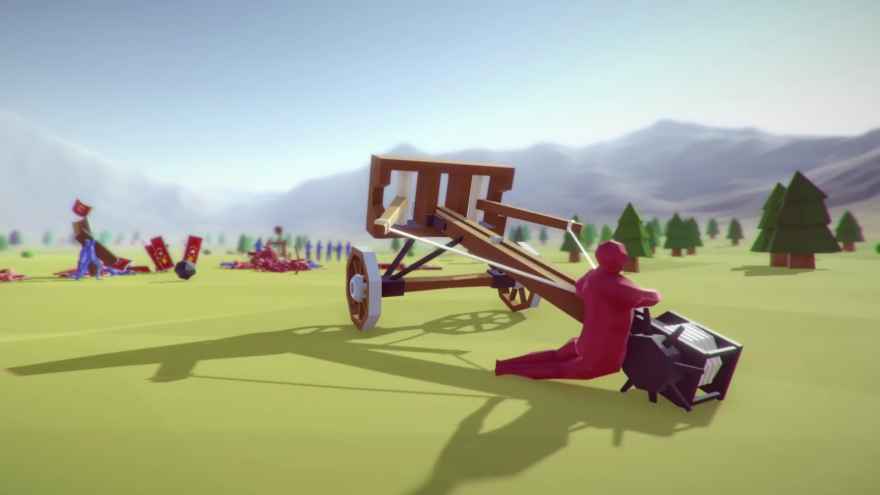 From the medieval battlefields of Mount & Blade to the near-future combat of Call of Duty, we’ve seen war in videogames portrayed in myriad forms: the tactical control of Total War, the civilian perspective in This War of Mine (2014), the ground-level chaos of Battlefield. But Totally Accurate Battle Simulator promises to deliver the most accurate digital warfare yet. Surely that name doesn’t raise any alarms.

Oh, so, perhaps it’s not the most accurate depiction of the battlefield, but it does look like the most vibrant and goofy take on chaotic combat this side of Gang Beasts. Developer Landfall Games is currently putting the final touches on their madcap truck-based platformer Clustertruck, and the physics silliness of that game seems to have brought fully-formed into their next project. Totally Accurate Battle Simulator is only at the pre-alpha stage, featuring some missions and a sandbox to test, but it’s already a visual spectacle.

Placing a wall of shield barriers with a phalanx of spears behind them, with cannons and ballistas raining projectiles from the back lines. A horde of peasants and club-wielding barbarians facing a rushing line of chariots. The physics-based combat means cannonballs barrel through charging soldiers, unleashing ballista bolts fling their launchers around wildly, and explosions send colorful bodies flipping through the air.


The pre-alpha has the feel of a puzzle game as limited funds challenge you to form the most effective defense against the enemy army, but Totally Accurate Battle Simulator is still early in development, and the structure and features will likely be extensively expanded upon throughout development.

Totally Accurate Battle Simulator will be entering alpha later this year. You can follow the game’s progress on its website.