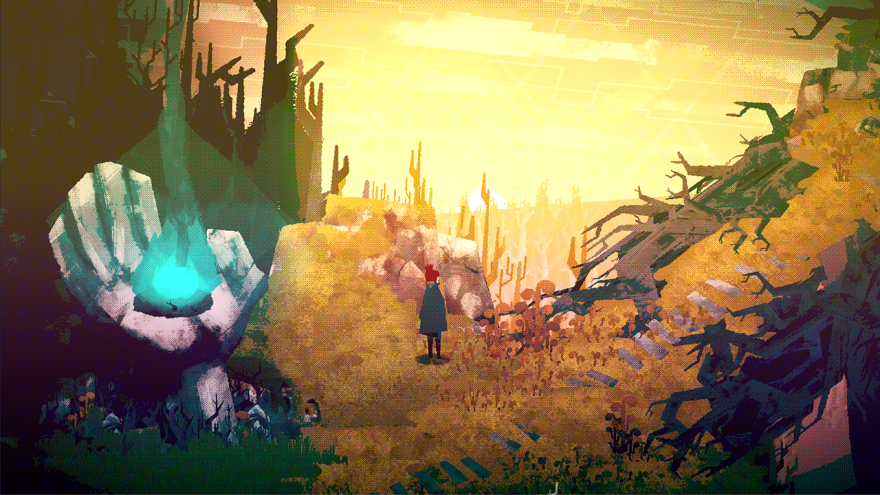 The above quote is all the descriptive information you will find on Totem Teller’s website. The game is still in its early stages—with the creators at Grinning Pickle mostly using social media to share more information about it, through screenshots and gifs, as they toy with different aesthetics and mechanics. The game’s IndieDB page goes a little further at least, telling us that the player guides the Teller as she explores a world which is part of a fading memory of a disintegrating story. The Teller gathers “pieces,” mends character arcs, unveils twists in the plot, and closes “holes” so the story can be retold.

With its female protagonist, as well as the themes and mechanics of time and decision making in a gloomy, and yet, at times breathtaking environment, its difficult not to draw parallels with the recently released Oxenfree. This, coupled with what seems to be a subdued glitchiness of the player’s experience of time and space, makes the connection stronger still.

However, it’s the potential differences between Oxenfree and Totem Teller that make the latter exciting. So far, all released footage from the game shows the Teller as a profoundly lonely figure among the gorgeous landscape. This is a stark contrast to Oxenfree, where the a large point of the drama is negotiating the dynamics of the teenage group of characters.

Moving beyond this comparison, Totem Teller clearly has an appeal all of its own. Its mysterious adage of “Truth is in the Telling” hints at intrigue, multiplicity, complexity. It also seems to undercut the idea of Truth being a singular, infallible, and objective object, to somehow be gained or gleaned as a desirable end. If Telling can receive the same upper case as Truth, then this tells us it has just as much power and sway.

This reminds me of historical concepts such as Benedict Anderson’s “imagined communities”, describing how we might socially construct our larger identities. Or perhaps, E. J. Hobsbawm and T. O. Ranger’s idea of “invented tradition,” once again to describe a type of social construction, which we often perceive as an infallible and objective truth. However, the most important point in all this is that, no matter how much we might want to wash ourselves clean of things “imagined” or “invented” as affronts to Truth, these aspects actually allow Truth to have so much more depth than we could initially give it. Telling, does not detract from Truth, but rather, enhances our understanding of it.