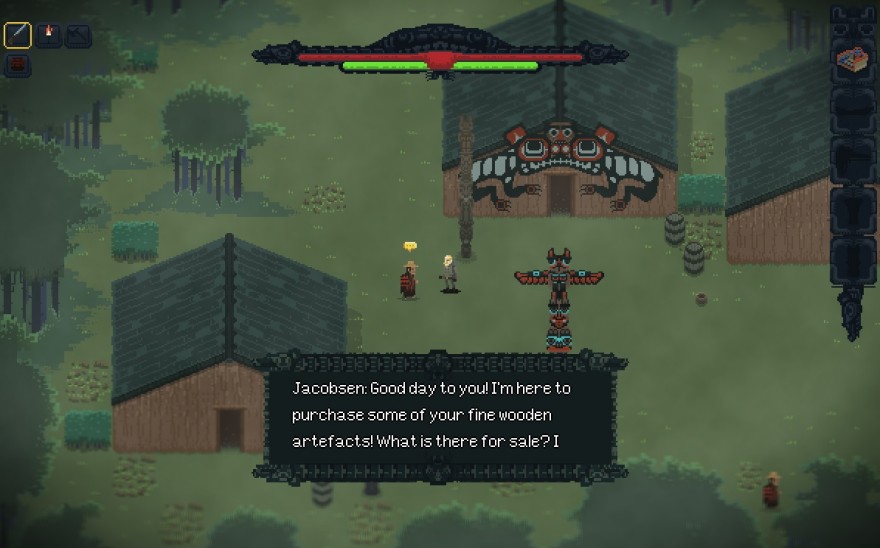 You can read a lot into a country’s politics by discovering what has been omitted from its history books. Having gone through the British school system, I only remember my homeland’s rather diabolical colonialist Empire being mentioned once. It’s something that, as a people, we seem to have chosen to forget about, and profusely apologize for it if it is ever brought up.

My train of thought goes that the has a similar impassive treatment of its own history of colonizing a native people’s land. That may be why I had never heard of the Norwegian explorer Johan Adrian Jacobsen before today upon playing a videogame based on the man’s personal accounts of his travels.

Jacobsen was commissioned by a support committee to travel around the world purchasing and cataloging over 18,000 artefacts from local tribes across Arctic regions, , , , and . From 1881 to 1883, he also sailed over to the west coast of to gather ethnographical specimens for the für Völkerkunde.

This is where Causa Creations picks up the facts and filters them through a videogame: five separate fetch quests with action-based sequences built around the obtaining of each artefact. The result is called Totem’s Sound, which is a freeware game produced by gold extra, and created in the framework of the Humboldt Lab Dahlem, which allows for its showing in the Museum Dahlen from to o it seems there’s a degree of historical responsibility attached to this little videogame.

Totem’s Sound surprised me by not being the safe celebration of Jacobsen’s world-travelling efforts I presumed it would be. That would have been the easy route for Causa Creations to take, and it does actually start off wearing that disguise—you march around a new white man settlement, toting a large rifle and a stately mustache, after being well-wished by your ship’s burly captain who refers to the natives as “savages”.

It carries on this way for a while. You shoot up totemic animals such as grizzly bears and wild wolves, you also collect clams while dodging sea lions, and partake in fish oil binge drinking before being part of a tribal dance. You meet natives that seem to be struggling to hold on to their traditions, but their problems are barely tangential to your greater goal of trading with them and, seemingly, enjoying the odd spot of casual tourism.

Initially, then, the game seems to deal in the same digital colonialism that so many big action games do; exploiting the exoticism of foreign lands to use their luscious scenery as a backdrop for its players to use as shooting galleries.

the ignorance of the museum’s efforts in favor of its own selfish goal.

But then the game’s disguise is whipped off upon completing the first chapter and obtaining the first artefact. The shaman’s chair that you receive from a compliant Native American woodcutter spins towards you in its own overstated TV commercial.

The chair is given a price tag in American dollars, and then described with absurd marketing jargon as if to try to convince you to buy it, right there and then. It’s like you’re seeing the fate of this chair now that it has landed in a white man’s hands, and how the non-native culture will re-purpose it as a commercial product, devoid of its original sacred value.

This becomes a leitmotif as every artefact you obtain is upsold in the exact same manner. It has the suggestion that Jacobsen’s work for the museum may not be as noble as we may like to think it is. He collects these artefacts from across the globe to spread knowledge of their existence and the tribes that created them, but this only really benefits the European people.

Jacobsen tries to trade in the large supply of coins and tobacco that he is given to complete his mission with, but it’s meaningless in the native culture he encounters, which illustrates the ignorance of the museum’s efforts in favor of its own selfish goal.

What Totem’s Sounds ends up being is a slice of enjoyable criticism of museums or, at least, how they conducted their worldly gatherings and prescribed to the colonialist attitudes of the time. It’s an effort to make us think about the historical foundations our civilizations are built upon, and how we might prioritize our pursuit of cataloging the world above the lives of native people that are affected by foreign advances, even if seemingly friendly.

You can find further information about Totem’s Sound on its website. It can be downloaded for free on itch.io.