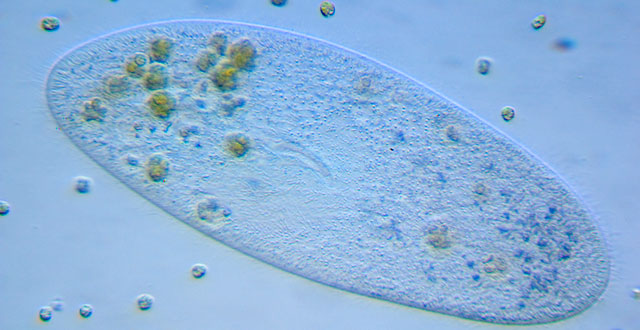 For the right kind of person games can be found anywhere, even at the end of a microscope lens. Ingmar Riedel-Kruse, a researcher and Assistant Professor of Bioengineering at Stanford University, has devised a way to make microscopic paramecia playful. The concept is simple: Riedel-Kruse connected some electrodes to a small chamber containing paramecia. Players are given control over the electrodes, which create an electric field that changes the paramecia’s movement. With this basic concept, Riedel-Kruse’s Biotic Games lab was able to create several imaginative prototypes for videogames that substitute microscopic life for computer intelligence. The results are provocative, showing videogames not simply as play objects but as a rudimentary medium for communication between two starkly different forms of life.

Where did the idea for biotic games come from? It sounds slightly intimidating.

It essentially came from reading about computer history and videogame history. In the way computer development enabled videogames you can see a parallel with bioengineering where bioengineers had built various things like integrated micro-fluidic devices that made this step possible. I became interested in using some of those technological platforms to make games. I was curious about what one could do with that, and what that would look like.

How did you settle on using paramecia? Do they have some inherently playful qualities or are they just cheap labor?

I just basically started with the things I had at hand and the techniques that I knew. Of course, I also looked at some traditional videogames to see how they worked and to look for ideas that could be adapted. The first idea was to have motile bacteria being guided around with chemicals to make them race. We tried that a few times but we wanted something that worked a little more conveniently. Paramecia are bigger than bacteria so it’s easier to see in a microscope. It’s also easier to stimulate them using electric fields than it is using chemicals on bacteria. But it was really just trial and error to find something that works.

Can you describe a few of the games and how you settled on their final forms?

They all follow the same basic setup. The paramecia are in a flat, one square-centimeter chamber and there are four electrodes on the four sides. We can make mild electric fields along the sides to move the paramecia in certain directions. Then we have a camera with a microscope that captures the image for the video screen that shows the movement of the paramecia. We have this general technology platform where a human player can push buttons to change the movement of the paramecia on the screen. Then we put virtual objects on top of the screen image using Flash. These objects can interact with the paramecia. In one game we call “Enlightenment” there’s a box in the middle of the screen and you have to drive the paramecia through it, which you get points for. Another one is a soccer interpretation where you use the paramecia to push the soccer ball in a certain direction to score goals. There’s another one that was inspired by Pac-Man where you have collect dots that are spread around the screen.

The grand debate of games as art seems to have subsided but considering whether they can be science might be next. Did you have any collaborators with game design backgrounds?

Not at this point. I’d had the idea for a whole and I finally got it to work with the help of some students in the lab. I’ve also thought about making games using molecules or different collections of cells like yeast. It’s thought-provoking to know it’s not only paramecia that we could use. But at this point there were no additional video gaming collaborators.

Did you go through many versions of the controller itself? The final form is a pretty traditional rectangle with buttons.

You just go with something familiar. We wanted to have four buttons. In videogame design you go through multiple iterations but this was a proof of concept so we were just focusing on the technological level. But if you developed it into something a lot of people could conveniently use we’d have to work a little more on the design.

What are some of the ethical considerations in using organic life in games like these? Do paramecia have rights?

There are multiple things we have to consider. Foremost, do the organisms at hand feel any pain while we play with them? In this case the answer is a clear “no” as paramecia are single celled organisms without any nerves let alone a brain. You can, of course, go to the more general question of whether it¹s okay to play with life. I don’t personally see any problem with that.

What’s in the future for biotic games. Are these just fun teaching tools or is there some latent scientific value still waiting to be discovered?

These games provide a certain way for humans to interact with biology. You can try something and see the response in the system that’s set up. That’s a basic kind of an experiment. What we envision is giving people that don’t come into contact with these things during everyday life a platform to explore ideas in microbiology. As to whether we could ever make research contributions, right now it’s just a setup in a lab. But if you could play it over the internet and everyone could have access to it, that would change things a lot.