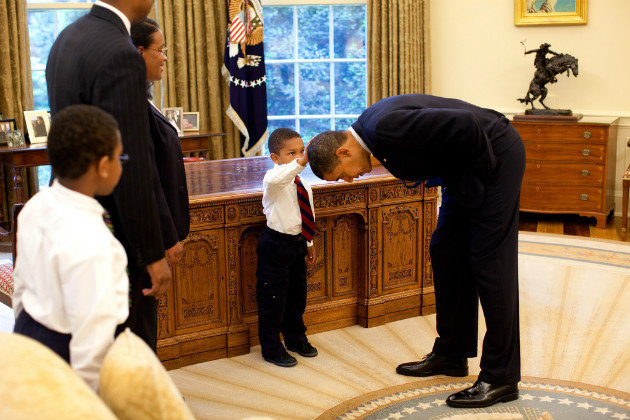 We’re taking MLK Jr. Day off, but thought it’d be worth revisiting this post, which originally appeared on the site January 22, 2013. With each passing year, it becomes more and more important.

At least half of America is still enjoying the afterglow of this weekend’s inauguration festivities. The president delivered a landmark speech—a call for unity on his own terms—and the significance of a black man being elected to the highest office in government for a second term need not be weighed here.

But my mind kept wandering back to a story from the Times last May. It was about a photograph (in fact, the one above) that had hung in the White House for more than three years. Its meaning is self-evident but its explanation is not.

The young boy is named Jacob Philadelphia (!) and his father was ending a stint on the National Security Council. As is customary of outgoing political positions, Jacob’s father requested a family photo with the President. With a former Marine for a father, Jacob had surely met plenty of black men of power and repute during his short life thus far, but there was something alluring about the President. His presence was so enchanting that Jacob asked Obama a simple question:

“I want to know if my hair is just like yours,” he asked.

It’s a simple question but a powerful gesture. It’s a moment of recognition and recollection. For all children, identifying what is and is not like you is of utmost importance. In nature, it’s called imprinting and it’s the same insanely logical impulse that leads Chinese panda researchers to dress up in panda costumes. We want to be what we see, for better or for worse.

We want to be what we see, for better or for worse.

David Axelrod, Obama’s longtime adviser, and no novice to the cold and calculating nature of politics, offered the best assessment of Jacob’s interactions with the president. “Really, what he was saying is, ‘Gee, you’re just like me.’ And it doesn’t take a big leap to think that child could be thinking, ‘Maybe I could be here someday.’”

That “here” is of utmost significance. It is a place occupied in the mind of Jacob in the distant future of where he hopes, even at his young age, he will occupy. Yesterday on New York City’s local news, a reporter interviewed a gaggle of black and Latino children about what their future ambitions would be. The usual suspects appeared: president (natch), astronaut, football player. It’s always astounding to me the breadth and loftiness of children’s ambitions. And it makes sense. You are what you see—we have black presidents, black astronauts, black football players. The real question for me, though, was—where are the black space marines and dragon slayers?

A couple years ago, I finished my playthrough of survival horror game Dead Space. It’s a wonderfully terrifying game that invaded my sleeping subconscious for several subsequent nights. (That is a good thing for a horror game, I am told.) At the close, your protagonist Isaac Clarke, the character you’ve spent countless hours battling Necromorphs (a.k.a. zombies) as, is finally free from his space battleground and heaves a sigh of release to remove his helmet and power up his escape craft. What we see is the weathered face of a white man with greying hair.

This is not a critique of Visceral Games’ decision to make Isaac Clarke white, but, for me, this was a moment much like Jacob’s interaction with the president. This was the man I had embodied for a dozen hours and there was a jarring disconnect between the man that I am and the man that I had played. He didn’t look like me, and the connection between me and Isaac stuttered a bit. He was just an avatar.

Last month, I did an interview with KALW in San Francisco alongside game designer Anna Anthropy. She made a point to a caller that she couldn’t relate to games like Grand Theft Auto and Metal Gear Solid because the main characters didn’t reflect her own experience as transgendered.

I found this position extreme (if I’m not transgendered, couldn’t I levy the same critique of her games?), but Anna did point out something that should be glaringly obvious. If games are to claim their mantle as the most important medium of this century, then their subjects need to reflect the breadth of human experiences that exist across a range of identities.

If you are mixed race like I am, you no doubt had moments of confusion about your place in the world. Why does grandpa send tamales each month to your mother? Why do I need to wear lotion? Why does dad take so long at the barbershop? These are resolved in later life and I was fortunate enough to have parents who walked me through those answers.

When the time comes for a child to ask “Who am I?,” games, like all great art forms, should have an answer.

But I also grew up on the cusp of the Internet age and before a time when 99% of all teens play games. When the time comes for a child to ask “Who am I?,” games, like all great art forms, should have an answer. The worry is that the response, more often than not, is nothing at all.

There are, of course, signs of progress. Papo y Yo. The leads of Rockstar’s games. The forthcoming Guacamelee. But honestly, lists feel reductive and it’s not merely about filling a quota. I can’t help but believe that that sense of destiny and progress, which Obama invoked in his inauguration speech, is out of step with the world of Master Chief, Commander Shepard, and Booker DeWitt. This is a country where for the first time in U.S. history, whites of European ancestry account for less than half of newborn children.

These days we hear of a game industry in flux—one under siege for its connections to violence, one in search of a business model that will last the next decade, one looking for a way out from under the weight of endless sequels. Game publishers, big and small, express frustration and doubt over what the future of games might hold for them.

But perhaps gamemakers are asking the wrong question. They are seeking a what rather than a why. If in need of inspiration perhaps these stirring words from the President’s address could guide the values of games for the next century:

We, the people, declare today that the most evident of truths—that all of us are created equal—is the star that guides us still; just as it guided our forebears through Seneca Falls, and Selma, and Stonewall; just as it guided all those men and women, sung and unsung, who left footprints along this great Mall, to hear a preacher say that we cannot walk alone; to hear a King proclaim that our individual freedom is inextricably bound to the freedom of every soul on Earth.

If this will not suffice, we need to quickly find a better refrain.