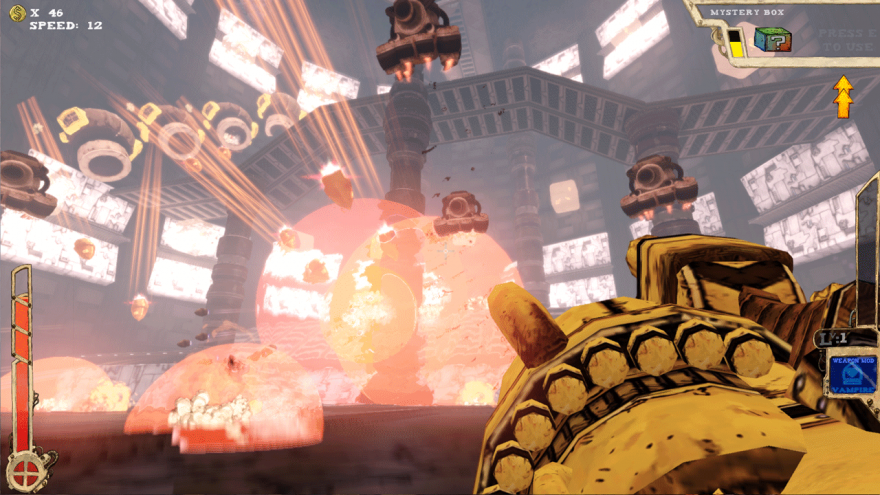 There are few things I enjoy more than sitting down with a friend and spending a few hours watching a terrible movie. To be more specific, watching Fast and Furious 6, the latest in the line of baffling, inconsistently titled car-porn movies. Beyond the magic of the terribly written dialogue, the impenetrable stupidity of the plot, and the joyful earnestness of the acting, there’s something about Fast and Furious 6 that brings me back time and time again: it’s easy. Fast and Furious 6 is the least-abrasive, easiest-to-swallow movie I can imagine. For all of its many, many flaws, and all of the places it can improve, the movie somehow congeals into something absolute and sublime. It washes over you.

In this way, Tower of Guns is much like Fast and Furious 6.

For example, what more could you ask from the title? As apt as Fast and Furious 6 is—even that number at the end!—Tower of Guns is presenting itself about as honestly as it can. It is a game where you run, circle-strafe, and floaty-jump through randomly-selected rooms while hundreds—hundreds—of stationary and moving turrets shoot at you. At the end of a set number of rooms, after collecting whatever power-ups and weapon-leveling-items you can, you ascend to the next level of the tower. Tower. Guns. 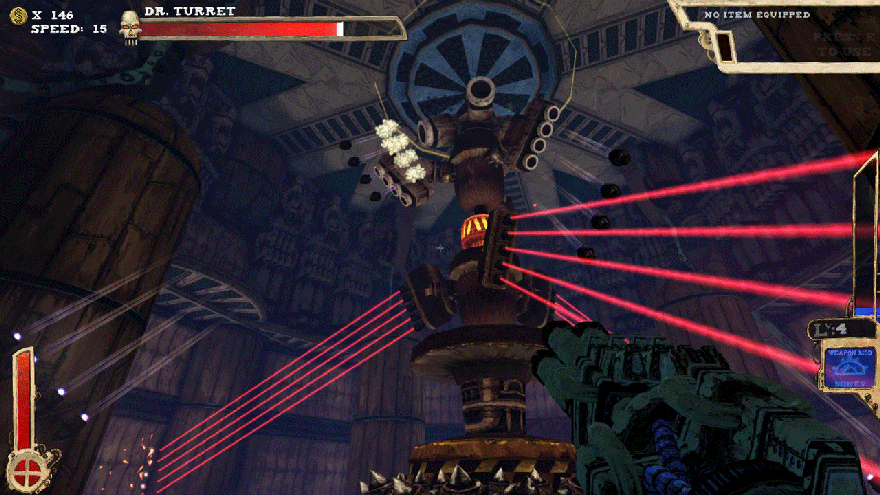 Tower of Guns positions itself, much as Serious Sam 3 did in 2011, as some sort of antidote to the unwarranted dearth of fast-paced, gun-focused games with stupid AI of late. While this is not exactly true, Serious Sam 3 did evolve into Borderlands and Borderlands 2, which took the root of what made those games fun, added intelligent enemies, and asked the player to make meaningful decisions. Tower of Guns, however, revels in the simplicity of the old Serious Sam and Painkiller era. In the same way Vin Diesel mainly has two modes of interaction— barking angrily at the camera or muttering wistfully into the floor—Tower of Guns’ enemies either run directly at you or shoot in your general direction.

Structurally, Tower of Guns is an Unreal, first-person Binding of Isaac. It is a “roguelike,” insofar as death is permanent, rooms and enemy arrangements are selected randomly, and exploration and discovery is encouraged. As in Isaac, players use items that recharge over time, gain weapon modifications that encourage different types of play, and search for secret rooms full of useful loot. Tower of Guns is successful in its pursuit of player empowerment—as in The Binding of Isaac, a run in which the players get all the right powers feels incredible, and items and gun mods are all singular and empowering. Even Borderlands’ randomly-generated any-bullet-can-be-a-rocket style of gun modification seems far less interesting in comparison to Tower of Guns’ pickups, which radically alter each playthrough.

If you told me that Fast and Furious 6’s script was rendered by a computer in Universal’s offices, untouched by human hands until it reached the actors expected to embody it, I would believe it without a second thought. The terribleness of Fast and Furious is enacted upon so earnestly that it comes across as endearing. Tower of Guns’ major flaw is its minimal ambition, but in execution, many of its imitations don’t come across as charmingly, however. Whereas the simple, fast-paced dodging of an almost-stupid number of bullets works fairly well in large arenas, boss encounters are an unmitigated mess. Each encounter inevitably played out with me at the foot of the boss pumping bullets into it with very little concern for my own health. The final boss, which is protected by a large shield, was overcome by my ability to jump over its shield, stand on its head, and take no damage as I held the fire button.

The most damaging criticism I could level against Tower of Guns, however, is the ineffective sound design. It is through sound and music that Fast and Furious 6 is able to never-let-up-never-stop-don’t-think-about-our-plot-oh-god-please-look-cars, but in Tower of Guns, with the sound design limited to what feels like a handful of looping songs and limp sound effects, I was constantly left with room to think about what was going wrong. Why didn’t I hear it when new enemies spawned? Why don’t my bullet hits feel weighty? Am I getting hit right now? Did I pick up that thing I walked over?

When I saw that movie for the first time, I left the theater knowing that I had just enjoyed something that was not as good as it could be. Not as good as most things, really. And as I played Tower of Guns, I realized that I had some pretty significant problems with the design and feel of the game. But both times, as I walked away from the experience, I almost immediately wanted to go back. It is a baffling phenomenon. There is something so inherently alluring in the empowerment of the player and the collection of genuinely interesting mods that I didn’t want to stop playing. Tower of Guns throws itself at the the player so furiously that, for all its flaws, it is an experience that makes the player feel good.