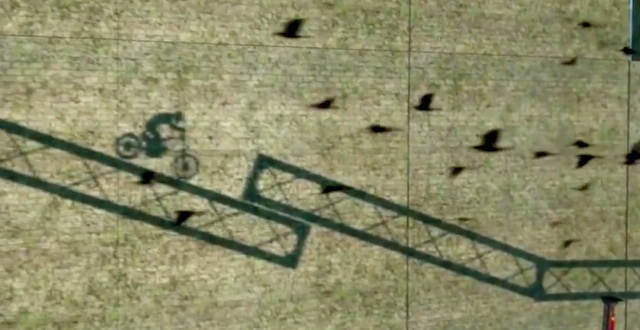 Trials Evolution steps up the game by finally letting users share their personal creations on Track Central, a burgeoning in-game hub stuffed with free custom tracks. Beyond the requisite Super Mario Bros. and Angry Birds mashups are weirder ones: a nearly endless loop-de-loop in the sky, one where you race in the first person, and much more. We paid tribute to some of our favorites so far.

Brian4325 has erased plot from Trials Evolution. Yeah, the game has a plot—gimmicks like hurtling through the forest into the blood-red horizon (“Ridinghood”) and slipping through the fingers of a stone colossus (“Titan Graveyard”). “Technical Terror” is just an array of increasingly sadistic obstacles sitting on a paved lot. They’re mostly made of boards and barrels. To pass one obstacle you fall backward on an incline, dragging your back across rock until you hit the ground. At the end is a vertical steel slab resembling the unholy obelisk from 2001: A Space Odyssey. You race up the ramp, reaching for the sky, become frozen in freefall for a split-second at the peak, then hook your front wheel over the tip, lean with all your strength to the right, and wrench yourself from the left side over to the right side. Or you don’t.

This is the kind of story that’s been overshadowed in Evolution’s move to the great outdoors. It’s where the surreality of giant tire stacks and five-inch-wide balance beams and mile-high swinging rope bridges meets the harsh reality of your bike. The game’s predecessor Trials HD focused on these bizarre juxtapositions—setting its tracks inside giant warehouses and dank caverns, trapping you alone with your trials. “Technical Terror” goes out into the light, with the rest of Evolution’s beastly menagerie, but it repaints the game in stark red and white stripes: danger signs. This reminds us that the game’s richest, most evocative story has always been one of hard physics and concrete. It took me 30 minutes and 300 faults to tell. — Ryan Kuo

I distinctly remember my fourth grade teacher asking our class this question. I distinctly remember realizing that despite being around shadows every day of my short life, I had no idea what they were. It is my earliest memory of being consciously aware of a gap in my own knowledge, of knowing that I didn’t know something. The teacher’s explanation was no less revelatory: shadows are where light hadn’t made it. Shadows aren’t thing; shadows are lacks-of-thing. For a nine-year-old, it was a lot to take in.

So goes Split Jugular’s “Silhouette Redux.” You never actually see the track or your bike, just their shadows cast on a wall. The “real” action—the “real” bike you are controlling on a “real,” corporeal track—is behind you, over your shoulder, out of your sight. Depth is gone. Perspective is skewed. Existence is flattened.

But the word “silhouette” is misleading. These aren’t the solid, backlit cutouts of the Limbo-esque track, “Trials of Limbo.” These are mere shadows. Lacks-of-thing. Ethereal and nonexistent, concealing as much as they reveal. What looks like an upcoming jump, you pass right through to instead hurtle down a hill. Bits of timber crumble, and you flinch before your shadow continues atop some other shadow-timber. You shift your weight to climb a pile of barrels, but your shadow just distorts and stretches across them. What you think you know about the track is constantly revealed as incomplete, making you feel like a nine-year-old boy finding out they don’t—and never will—understand everything. — Brendan Keogh

So when I popped open the Trials Evolution level editor, I instantly wanted to make that loathing for world creation evident. Screw looping castles in the sky. I was going to build a long runway for a drag race. The anti-Trials course. This wouldn’t be about dexterity, it would be about speed. Fortunately, I have a kindred spirit. I do not know her name, but we share a common love for the daring banality that is “Turner Extreme.” It is not extreme.

What ensues, however, is a bit of counter-logical magic. Trials Evolution is about feats of mechanical gymanastics. Parkour on two wheels. Turner is just a strip of highway. That’s it. No jumps. No hurdles. Just road. It’s the clean knife of a surgeon, the sharp pen of a jilted copyeditor. And magically, from that elegant nothingness emerges beauty in Supercross multiplayer form. Without the clumsy trappings of tires to slow you, the race to finish line becomes an odd contortion, a ballet even, on the motorbike. You and your opponents are simply adjusting your weight to eke out a hundredth-of-a-second edge.

“Enter ye in at the strait gate: for wide is the gate, and broad is the way, that leadeth to destruction, and many there be which go in thereat.” — Jamin Warren

The stage is set when I drive full speed up a ramp and through a lovely golden gate, surrounded by the purest white light. I am driving my motorbike into Heaven—that is something to be excited about, so I gun it. Throughout the track there are several well-placed stones, tilted just so, providing a ramp upward and onward; there is no downhill—that would be blasphemous. Instead, there are celebratory straightaways across fountains and past tall golden doors. But this is not an easy track. The first time I try to speed through, I slam my head indelicately against a golden grating. After several tries on a slowly lowering stone, I manage to jump through the grating at just the right moment, landing on the opposite side. The final obstacle, a slowly rising platform that gently tosses me toward a final straightaway, requires both patience and trust—an appropriate meditation on those two paramount virtues. Immediately after, I drive up the stairs and am raptured off of my bike and into yet another heavenly gate. Only then does it become clear: this wasn’t quite Heaven, but the final and ultimate trial. — Richard Clark

Your biker is driving through the future battlefield from Terminator 2: Judgment Day. It’s overcast and all the plants are dead. A Skynet chopper hovers menacingly. Lasers. At one point, you can spot a pickup truck just beyond the neighboring hill, which makes no sense. The track is little more than a diorama—a flat road that places you at the center of the unfolding scene, as if your wheels were a churning film reel. The idea that you’re just passing through the apocalypse is pretty funny. The level’s second half shows that the joke’s on you. Somehow you’ve blasted into the present, and you’re no longer enjoying the scenery. You’re racing on the freeway. It’s when you see the Mack truck edging into the frame on the left—the one that Arnold drove in the film—that you realize you’re being chased. Suddenly holding the right trigger isn’t how you pass the time; it’s gunning for your life. And here’s where you fuck up. The terrain is still flat, but the camera cuts it up like confetti, so that you’re zooming into the distance and then you’re falling; you’re careening to the right and then you’re staring at your own faceplant from the other end of the road. Trials Evolution is full of tricks, but you could always trust your own eyesight until now. A simple cut, from profile view to head-on, destroys your instinct about whether to lean forward or back. The level designer, and filmmaker, severs your connection to that body even as you both hold on for dear life. The best part? You never see the trick. — Ryan Kuo

UC Cemetary
IM A IN II A IK

At first it seems utterly disrespectful. Driving a motorbike around and over the graves of the deceased, using their gravestones and memorial structures as ramps and stepping stones, the disregard for their peace comes to a climax as I jump over a small cross, my tire nearly clipping it. But the bigger crime belongs to whoever allowed this place to become so run-down—stones fallen unceremoniously on top of one another, displaying nothing close to beauty, and useful only to me, the driver. Suddenly it becomes clear that this is a cemetery whose beauty relies on a missing piece: a daredevil who cares not for life and only for speed. I race with abandon toward a lit-up structure, an inviting diversion. I expect to end up inside or on top of the church-like building, but instead find myself racing past it, launching myself in front of the moon and onto a wooden deck. Desperate to find my way to more structural beauty, I drive carelessly to the seemingly premature finish line. Before I even realize I have reached the end of my journey I watch my bike collide into a tree stump and my lifeless body fly forward and land into an open grave, where I will await others who will inevitably pile on top of me. — Richard Clark