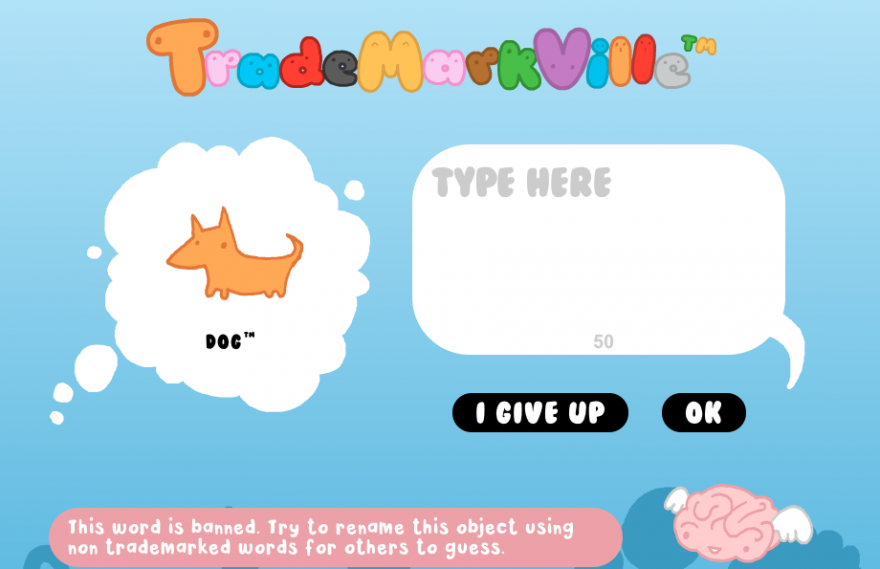 Trademark abuse is horrible. But TradeMarkVille—from the videogame activist Molleindustria, together with Mikhail Popov—is a bright, happy place where strangers on the Internet play an asynchronous guessing game with words. That is to say, of course, it’s an often hilarious pot shot directed at the trademark bully and least-popular-company-on-the-net King, maker of the chart-dominating mobile game Candy Crush Saga, who recently tried to trademark the extremely common word “candy.”

They eventually abandoned that nonsense, but TradeMarkVille dares to ask what if trademarks were awarded to everyday vocabulary, for example, to words such as “dog,” “heart,” and “saga.” Well, there goes my brilliant idea for the game Dog Heart Saga. Developers would just have to invent new words to finagle around the legality in order to name their games.

And we’d all be playing word games to figure out what they were describing. You know, words like: thingunderbridge. This was a word some thoughtful stranger across the Internet coined that I failed to guess. It wasn’t water, stream, air, or another bridge. I was able to guess “meoooooooooooooooooooooow,” however, and felt pretty proud.