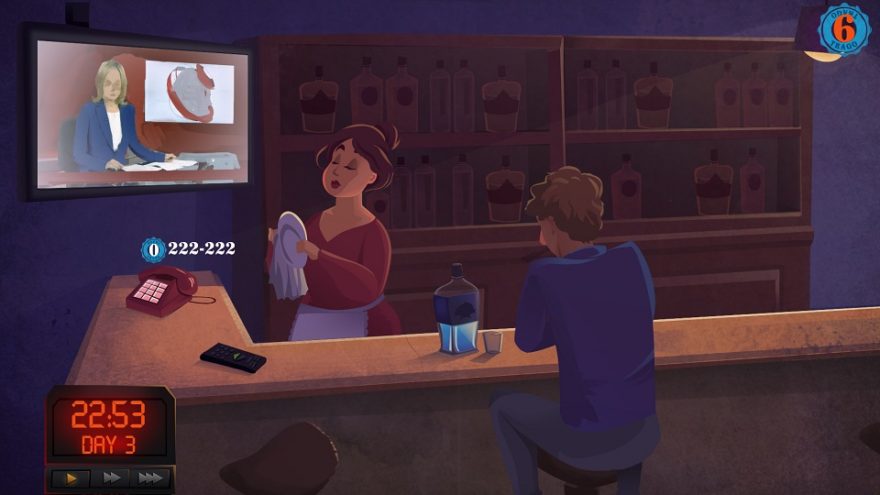 How often do you see yourself going to a pub in the middle of the night, just to sit down, have a couple of drinks and chat with the bartender or the person sitting next to you? Well, SpaceGiraff3, a four-person team from Brazil—Alexandre Chaves, Lola Assunção, Felipe Ftezer, and Vicente Reis—decided to make a game to simulate that experience in their upcoming narrative-based, multi-choice game.

The game, called Trago, is built around storytelling and has multiple branches for you to pick from when progressing through it. “Every person will play different, so every person will have different opinions about the plot,” said creative director Alexander Chaves about the game. He adds that some choices can actually lead to your character’s death.

It focuses on four characters: Juca, Joana, Carlos, and Jessica, with Juca being the focus on the story. As Chaves describes them, Joana is the waitress behind the bar, unsatisfied with her job, but needs the money. She’s also an honest person and has a bit of a thing for Carlos. Carlos is the old manager of the pub who quit his job a few months ago, leaving his brother Vicente to handle everything. Carlos is an asocial person but manages to win Juca’s friendship. And Jessica is Juca’s ex, who broke up with him thinking he was having an affair, and who serves as the reason why Juca keeps drinking. There are also secondary characters like Vicente and Ftezer who are “an important piece to the narrative but without much appearance on the story,” according to Chaves.

Being set in a bar, one of the unique ways Trago lets you open up new story options and dialogue choices is by drinking shots. For example, in order to gather up the courage to talk to your ex-girlfriend on the phone, you have to drink a specific number of tragos: “to reach this quantity the player needs to progress [to] the drinking game,” Chaves explained. “The mechanic works like a sequence game, the player must press a sequence of keys to drink all the liquid [in] the glass, every glass finished is a new ‘trago’ and add a new key to the sequence.”

At the moment, Trago contains 525 lines of dialogue, but the team isn’t stopping there, with their final goal set at 600. The game is going to be released in two stages, the first is a version that will be exclusively available on Game Jolt, while the second step is a full release on Steam. The latter will have extra content, an additional ending and, of course, Steam achievements.

You can find out more about Trago on its website and on Steam Greenlight. There is no release window for it yet.