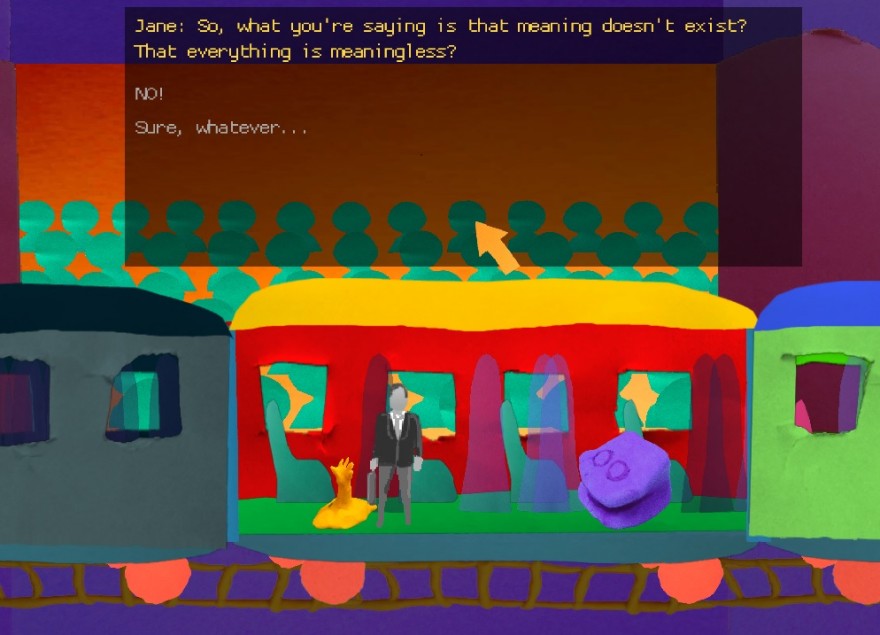 Train Song is nothing if not elusive. It gives you seven minutes to pace the garish claymation carriages of its train to wherever. In that time you must choose which of the deformed blobs and grotesque putty passengers onboard to speak to. The oft-cited characterful Cantina scene in Star Wars has nothing on this bizarre cast of slime witches, smoking seahorses, and blob mothers.

Each thing will tell you of weird lands and offer up the purposes of their journey. With this knowledge you must then piece together your own bizarre dialogue—perhaps the titular song—once the train stops and you speak to Eric, who acts as a sort of quizzical gatekeeper for anyone wanting to depart the train.

It’s the kind of game that leaves you questioning what you just played. Don’t be surprised if you find yourself impulsively replaying Train Song once or twice, just so you can see what the other passengers say and try to work out what it all means.

Perhaps it’s a journey into death? Train Song‘s introductory rebuttal is sudden enough to qualify that explanation. In one moment you’re an Irish man in a business suit hopping on to a steam train, and in the next—after flying past swirling clock faces to electro-death music—you’re inside a toddler’s art project talking existentialism.

But Train Song seems too jolly and whimsical to be read as a literal ghost train. I’m happy enough not prying too sharply into each of its sentences, and accepting the surface reading that, actually, it’s about an inter-dimensional train that randomly slurps folk up as it travels across the fringes of all that is.

Train Song is whatever you read it to be. You can delve deep into philosophical meandering and discuss which passengers are allegories. Or you can make as if a stoner and absorb its colorful trip through underwater worlds and starry skies, grinning at the finger-pressed makeup of the red dog, the twins, and the naughty tykes.

That it caters to the low-brow and high-end of interpretation and appreciation is an achievement in itself. And forming your song to Eric at the end of each playthrough, again and again, encourages you to consider what it is you’ve learned and taken away from it.

So, perhaps a more apt explanation is that Train Song makes a performance out of interpretation. Like the train, we ride the same tracks over and over, but each time we bring new knowledge and experience to the pot, which makes for a different song or understanding. It’s a strangely decorated exercise in epistemology.