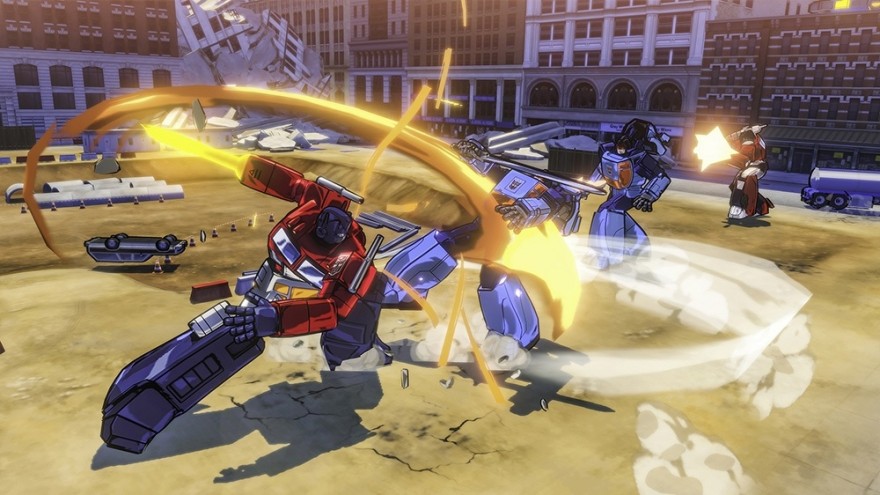 My kids think that Transformers are just about the coolest thing in the world, and while I find myself at a loss to trace the source of many of their enthusiasms—I have no idea where they first encountered Minecraft or the Teenage Mutant Ninja Turtles—I’m reasonably sure that their love for robots in disguise started in earnest when they discovered the 2010-2013 Transformers: Prime animated series on Netflix.

I was in truth a little embarrassed when I introduced them to the original cartoon. I’ve long since come to terms with the low-budget animation and apparently half-hearted writing that characterizes most of the cartoons I watched so fervently as a child, at least in general, but it was still more than a little uncomfortable to confront the immediacy of how awkward in execution, how downright corny the show really was. My middle-schooler laughed uncomfortably when, jolted accidentally into a repair beam by a rockslide triggered by an ill-considered parting blast from Starscream, Optimus Prime hopped to his feet with a thumbs-up and a chipper “Thanks!” directed to a mechanical welding arm. We didn’t even finish watching the first episode.

And this, for what I hope are obvious reasons, does not include my kids. Which results in a strange tension between the game as it looks and the game as it is. After all, Transformers: Devastation revives the visual style of a cartoon aimed at ten-year-olds, but constructs itself as a game not so much for ten-year-olds as for thirty-year-olds who want to inhabit a version of their ten-year-old selves with more punching, better animation, and an occasional knowing nod to how silly-awesome the whole thing really is. When the Autobots seek to extract a vital bit of intelligence from Thundercracker—a version of Starscream with a blue paint job, which in the original toy line/cartoon was functional characterization—he tells them without hesitation. Bumblebee responds with a “That was easy,” that is half ten-year-old surprised sincerity, and half a wink to the camera from an ironic thirty-year-old.

It has become a mark of something resembling authenticity across Transformers media to (re)cast Peter Cullen, the original voice actor from the Generation 1 cartoon, as Optimus Prime. I’ve been fascinated, however, at how little impact this has had on my children when they encounter older iterations of the Transformers. Even though Optimus spoke with the same solemn resonance in Transformers: Devastation as Transformers: Prime, my middle-schooler repeatedly described him (and the other characters) as “obnoxious.” In fairness, I suspect this might have been informed by the devoted fan’s instinctive skepticism of reinterpretation and preference for the familiar—an incompatibility, perhaps, between two generations’ competing nostalgias.

Built on the same easy-to-learn, tough-to-master combat as Platinum Games’ Bayonetta series—which my children will not be old enough to play for some time yet—Transformers: Devastation serves either as a reasonably attractive new playground for largely familiar toys, or, in true nostalgic form, as a better version of the media property it seeks to embody.

But you can’t really go home again, and revisiting the Transformers universe, I found myself engaging less with the attempts at conveying heroism and loss than with the social anxiety reflected in the b-movie undertones of the Generation 1 premise.

Premiering in 1984, the original Transformers cartoon was largely a battle-of-the-week toy commercial, with even the massacre of familiar characters that kicks off the 1986 film serving more as a planned obsolescence to motivate fans to purchase a new set of merchandise than an attempt to raise the narrative stakes or tell a new story. But the battles staged between the cardboard-thin “good” Autobots and “bad” Decepticons were deeply informed by the energy crisis of the late ’70s and early ’80s.

The evil of the Decepticons was expressed primarily through a ravenous appetite for energy and a willingness to disrupt human energy infrastructure. The story may have tried to focus on the nefarious plans the Decepticons would put into action once they secured a sufficient energy supply, but the images that stick with me are of giant robots attacking supertankers and power relay stations, converting crude oil and electricity into energon cubes—which apparently had at least mild intoxicating effects when consumed. (I can’t quite figure out whether this prefigured Futurama’s Bender consuming alcohol for fuel, or whether Bender might in fact be a sidelong parody of half-inebriated Decepticons.) I learned about the Alaska Pipeline and that Prudhoe Bay was a major oil port from a Transformers storybook and the dramatized read-along 45 RPM record that played a chime every time I was supposed to turn the page.

the fear that our energy sources may destroy us

Reflecting our updated early 21st-century energy context, Transformers: Prime reverses the dynamic of energy scarcity, giving the Decepticons a steady, reliable supply and turning the Autobots into survivalists always on the brink of starvation. If the Decepticons are thieves and, in effect, energy terrorists in the original cartoon, threatening what had previously been humanity’s cheap, abundant supply, then the Autobots in Transformers: Prime seek to liberate energy from the artificial and near absolute control of the Decepticons. Both play a disruptive role in the context of the broader energy supply, but the significance of that disruption in the two cases is almost entirely oppositional. In the ‘80s, we were still reeling from the memory of gas shortages and the 1973 OPEC embargo. By 2010, cheap gas is a story we tell our children (or our parents tell us), and the fantasy has shifted from the restoration of abundant international supply chains to local procurement by whatever means necessary.

And if Transformers: Devastation sidesteps the issue of scarcity—and humanity itself, for that matter; there are no humans anywhere in the game—then it touches on another of our current anxieties: the fear that our energy sources may destroy us through not abundance or scarcity but through something in their very nature. The plasma core that drives Transformers: Devastation’s giant game of keep-away might restore the Autobots’ lost homeworld Cybertron, or it might explode and destroy the Earth. Coal and oil might have helped create industrialized society, but they might boil us alive. Alternative sources might be carbon-neutral, but wind farms might threaten wildlife and even create undesirable or harmful microclimates. Even Greenpeace is critical of large-scale hydroelectric projects.

Maybe that’s the appeal of playing Rock ‘em Sock ‘em Robots in bright digital color with a wailing ’80s hair-metal soundtrack. Even the Decepticons were just trying to save the world—their world, regardless of the cost to anyone else. Controller in hand I can stand up to them with the courage and obstinance of a ten-year-old, drunk on the energy pouring into my consoles from I know not where. I’m pretty sure my kids will deal with it eventually, one way or another.