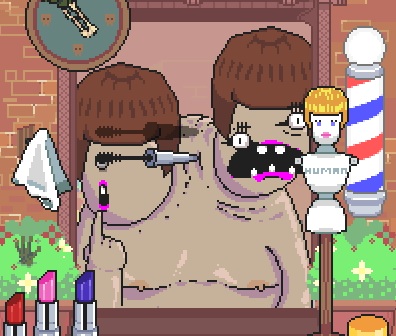 You know who I’ve always admired? Divine. She was only a stage persona, a high-camp drag queen and music act, but one that challenged notions of beauty and decency while entertaining the hell out of you. I first came across Divine in John Waters’s cult classic midnight movie Pink Flamingos (you may know her from Hairspray). In it, she is called “the filthiest person alive” by the newspapers, and it’s a title that she desperately tries to uphold with her “filth politics.”

In the film, she’s considered to be a monster, or at least a criminal, but you can’t help but be drawn towards Divine due to her confidence in voice and body. Even when she’s gagging on actual dog shit at the film’s notorious ending—at which point you’ve seen her hack up bodies, give head to her son, and advocate cannibalism—Divine is still somehow irresistible. She’s known for her ugliness but specifically in how she transgresses it: she mimics the behavior of red carpet actresses of the ’50s (Monroe and Mansfield especially), challenging their femininity by fitting her own pot-bellied 320 pound body into tight glamorous dresses, wearing big frightfully blonde hair, and licking her red glossy lips hungrily. She’s filth’s biggest star and she’s absolutely rockin’ it.

they embody that same resilience seen in Divine.

Divine is what I see in every single monster that you slap lippy on in the dress-up game Monstre de Coiffure. It was made for Ludum Dare 33, meaning that it’s a riff on the game jam’s theme of “You Are The Monster.” In this case, you are the monsters’ hairdresser, and must attempt to dolly them up to pass off as humans.

Unlike most other dress-up games, you’re given both a specific look for each monster (demonstrated by a mannequin) and a time-limit in which to achieve it in. This is made all the more pressing by the fact that some of the monsters have abnormal portraits, as you might expect. It might be two heads (requiring double the amount of work) or a face so stretched and mutated that just finding the cheeks to apply blush to is half the challenge.

On top of that, the game’s creators have put the care in to make each of your cosmetic tools tactile. Hair dye must be shaken before sprayed, scissors require several clicks to cut hair, and mascara has to be dragged up the screen to lengthen those lashes. You need to exert physical effort to succeed here, which makes it feel even more absurd that the finished result is always spectacularly non-human. You end up with slugs in wigs and torsos with teeth outlined clumsily with lipstick. These monsters never had a chance of being ‘beautiful’ as we’re led to understand it (and as represented in the mannequin).

But these monsters refuse to have beauty denied to them and, with your help, squash their way into its spectrum. And it’s in this that they embody that same resilience seen in Divine. In an essay on the transgressive politics of Divine, Lindsay Hallam noted how she became a grotesque icon for people at the fringes of society from the 1960s onwards. “In the past the freak lived in the carnival, a transient existence that put him/her on the fringes of society,” Hallam writes. “The freak was marked as an outsider by both his/her appearance and lifestyle. In the 1960s, however, those who were anti-establishment began to identify themselves with the freak, as they too were persecuted because of their looks (long hair, strange clothes, androgyny), and situated themselves apart from mainstream society.”

these monsters directly confront notions of beauty through their appearance

The monsters in Monstre de Coiffeure are the modern reincarnation of this bodily rebellion. We now have Instagram and Facebook encouraging people to post images of themselves, and due to it being up for judgement by hundreds or thousands, if not more, the pressure is to look beautiful or be harassed. A recent viral “challenge” attempted to subvert this reality but ended up failing spectacularly over time. The “Don’t Judge Challenge” had people making themselves look as unsightly as possible in the first half of a video, and then, after a transition marked by their hand covering up the screen, would reveal themselves in as pristine condition as possible. The message was supposed to be “don’t judge a book by its cover” applied to people, but ended up as a way for good-looking people to show off while simultaneously reinforcing the idea that ugly people are undesirable and should be laughed at.

Dressing up the monsters in Monstre de Coiffure is much closer to the attitude upon which the Don’t Judge Challenge was founded and has little chance of being diverted to other means. By applying these cosmetic products, we see these monsters directly confront notions of beauty through their ghastly appearance, just as Divine did with her big shit-eating grin. This is taken further once the make-over is finished as each monster is then wheeled out to immediately face the judgement of the public. You ring a bell and, as they disappear off-screen, can hear them usually being greeted with screams, presumably from the humans that first catch sight of them.

You don’t get to see the monsters’ reaction to their bringing about horror to people but I hope that they flaunt their stuff even harder, smeared lipstick and all. That’s what Divine would do. And she’d do it exactly because it’s what we’re told not to do, whether implicitly or directly, society pressuring the ugly, the freaks, to save themselves from potential humiliation. And it’s in how they so aggressively subvert this expectation that we can admire these luscious queens of filth.

You can download Monstre de Coiffure for free here.