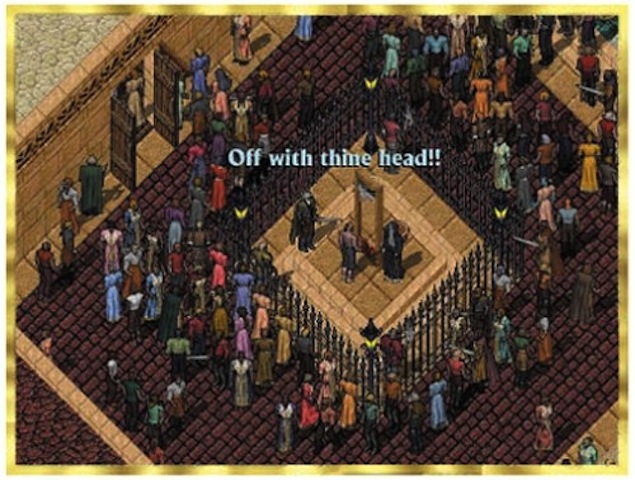 The game du jour in the Kill Screen New York bureau is Guild Wars 2. By most accounts, it’s a new classic and potentially the benchmark in the world of massively-multiplayer gaming. And because of a traumatic experience I had when I was twelve, I’ll never play it, or any massively-mulitplayer role-playing game.

It’s story time with your editor.

The year was 1997, and it was an auspicious one. I was not yet touched by the confusions of puberty, I was months away from the biggest score of my young life – that is, my Bar Mitzvah – and I was totally, unreservedly in love with games.

I was in the habit of accompanying my mother and sister to the local mall in suburban Maryland for their shopping jags at Nordstrom so I could slither away to the Babbage’s next door. Remember Babbage’s? At any rate, on one particular October Saturday, the clerk, whose name now escapes me but whose chinstrap is branded onto my mind’s eye, mentioned a new game, an exciting game, a game unlike all other games.

It was called Ultima Online, and the point of it was that you played it online all the time, with other people. It took a moment to work the concept into the meager lobes of my child brain, addled as it was with single-player pleasures (I already mentioned I had not gone through puberty, you sick so-and-so).

Oh sweet Babbage’s, light of my life, scourge of my allowance!

Later that afternoon, I installed the game, braved the harsh bleatings of the 28.8, and found myself in the world of Ultima. Now, I see the details of my first and only day in the game through a mist, and if any of the Ultima die-hards out there wish to pick holes in my retelling, please do us both a favor and don’t. It discredits both of us.

I started the game clad in a simple tunic (and you must be clad in a tunic, never dressed), accompanied by a pig. I don’t remember why I had a pig, ok? I just did. So I started wandering around the nearby town and began to feel the distinct sensation of being a child lost in the supermarket. People were going places purposefully, and I was just kind of walking in circles, afraid that if I turned my computer off, my character would just stand still and be mocked. No, I didn’t quite get the concept of an MMO yet.

At length, another player approached me, began a chat. It went like this:

“Look, I’ll show you the ropes. The first thing I should do is initiate you into our guild. It will give you a community in the game.”

“Rob, why is your guild in the forest?”

“Because that is where the initiation takes place!”

I reeled away from the computer, my mouth open. How casual the betrayal, how simple, how mean! I hit the power button on the PC tower, went upstairs, sought solace in the  fur of my Golden Retriever. I never returned to Ultima.

Over time, my pain hardened into cynicism. I grew up, watched Everquest swallow the lives of high school classmates, watched the best of a generation fall before the World of Warcraft onslaught. I kept my peace with the single player RPGs, the shooters, the puzzlers, the adventure games. I dabbled in lightly-multiplayer gaming. But Rob6969’s treachery never left my mind. I could never, can never, bring myself to log on.

You know what? Rob6969 did deprive me of thousands of hours of gaming, of grinding. But he also, in so doing, forced me to do other things instead, like “read” and “play sports” and “make in-person friends.” It’s quite possible that if I had started Ultima Online any day but that horrible day in October, I would have actually gotten into it. Like, really into it. And that is a fate I’m not sure I want to consider.