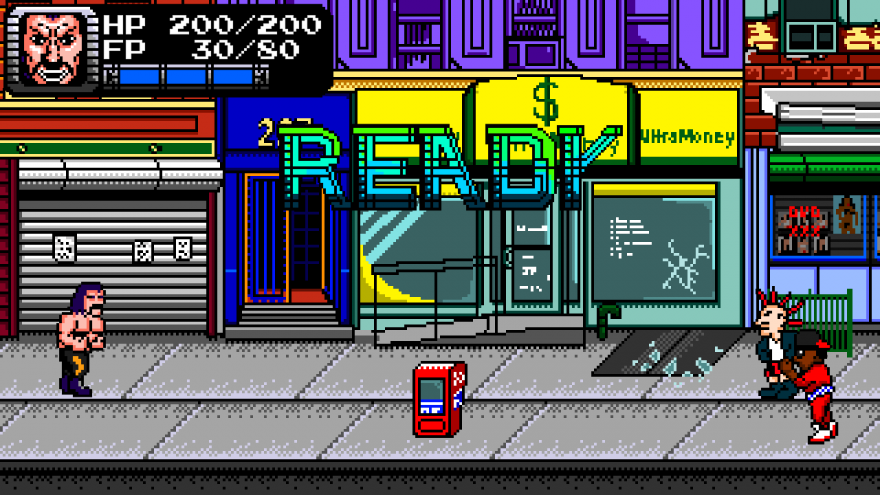 Though we hear plenty about the unsavory sides of the fighting game community, little is ever said about the circumstances that make these games appealing to begin with: the coping fantasy of finally being able to fight back. This is especially true when there is a very real threat of violence looming over your everyday existence, or the threat of a concealed weapon if you try to defend yourself. Little is said about the connection between growing up underprivileged and the draw of fighting games and beat ‘em ups.

I met with NYC native Shawn Allen, a former employee of Rockstar striking out on his own, at a coffee shop near Washington Square park where we talked about his tactical beat-em-up, Treachery in Beatdown City, which mashes up SNES-era RPGs and Double Dragon. We discussed how growing up in Manhattan in the 80s and the culture surrounding fighting games influenced everything we see in the game and the catharsis of beat-em-ups.

Growing up in poverty, Allen took any opportunity he could to play games, and kept a diverse group of friends who were in similar situations. One friend of his had a Super Nintendo and lived in a squatter building in the Lower East Side. Although his family wasn’t able to pay rent, they managed to jack into the city’s electricity and used a found stereo system to provide a relatively safe place for the neighborhood kids to play fighting games with one another. “Relatively” because he recalls a neighboring apartment with terrifyingly hostile dogs. He was 8 years old then.

This same friend would siphon quarters from his laundry money so he and his friends could play arcade games at a nearby pizzeria, but they always played with the terror that his dad would find them and there would be hell to pay. Then, another friend would pocket a little from his allotted haircut money by going instead to a cheaper hair cuttery, but his parents eventually got wise and he never risked it again.

And although Allen’s friends would obsessively compare and contrast the various fighting games they’d grown up with, Allen appreciated them all for their own merits and began to look at them from a very mechanical viewpoint. 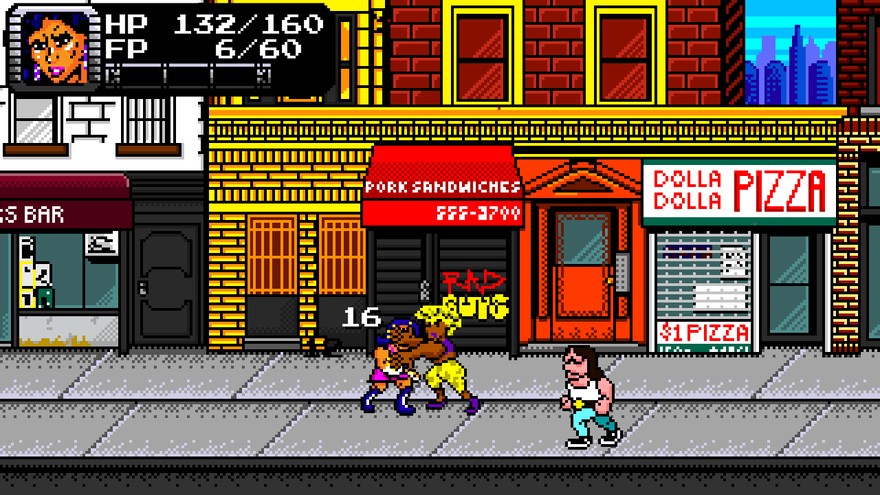 It was Fire Pro Wrestling that launched Allen’s fascination with learning and mastering systems. Fire Pro Wrestling had “great enemy behavior” (Allen takes issue with the term “AI” because “it doesn’t really exist”). He appreciated the semi-predictive nature of the characters under certain conditions, but the hidden factors and real-life personality quirks were what really what fascinated him. This factored heavily into Treachery in Beatdown City.

The game forces the player to start as a female character, Lisa (inspired by Allen’s wife); Allen wanted to remove any doubt right away from players that the female character might be weaker and disadvantaged. This, too, came from real life. He expressed a sort of guilt for not having picked Chun Li the very first time he played Street Fighter as a young child—and then he immediately lost to her and recognized right away that women in fighters were not disadvantaged.

Our in-game biases run deep but they’re not always clean. Many players in Allen’s neighborhood opted to play as Ken in Street Fighter—that’s Ken, the blond-haired American stereotype as perceived by Japan. But the stereotypes don’t mean much to the pan-cultural milieu of inner-city New York. Allen wants to represent his experience growing up, and bringing diversity to the table followed naturally.

He immediately lost to Chun-Li and recognized right away that women in fighters were not disadvantaged.

“I was doing a stream the other day on Indie Megabooth and Lisa—a darker-skinned Puerto Rican lady—gets racially profiled by a lighter-skinned Latina woman who’s a security guard,” Allen said. “I was explaining that this is a fight against gentrification, and I actually got beat by the computer. And I started laughing because apparently if you get into a fight with gentrification, you will lose.”

One of the things that sets Allen’s game apart from others in the genre is that you’re not fighting stereotypes—you’re fighting people. He closely considered the personal preferences of the characters in the game and who they would actually be associating with to determine groupings. There are police profiles that offer background and personality sheets on each character so the audience is aware of everyone’s reasons for fighting.

“We’re in New York, the land of great character design, where people go out of their way just for the evening to be super dressed up even if it’s super uncomfortable.” And New York being the capital of fashion, Allen’s seen three decades of high and low fashion and all the collision in-between. He’s had plenty of inspiration for unique character creation and to ask himself: what really makes these seemingly disparate people tick? 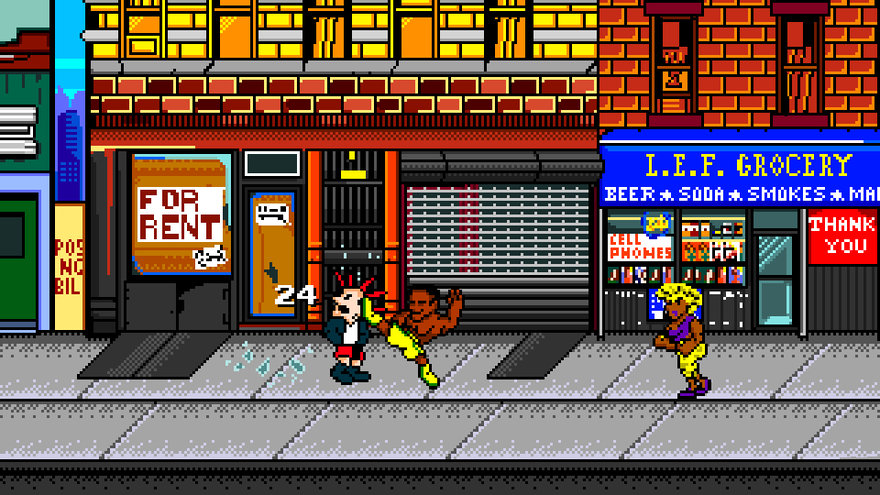 For someone making a semi-autobiographical fighting game, Allen isn’t a guy who goes looking for a fight. Being tall, people were always looking to use Allen as a proving ground, looking to pick a fight. Growing up in the 99th percentile of his class got him plenty of bullying, too. He talked about playing a game with a fellow kid where his shirt was accidentally ripped, and he couldn’t afford a new shirt, so he demanded the kid pay him back. The kid punched him in the head in response, but Allen refused to start a fight with him. The other kids got on his case about it but he settled the matter with the shirt-ripper’s parents. “It sometimes frustrates me that I’m not that person,” he says.

All of which is not to say he hasn’t encountered violence. He was mugged at age 17 and had his walkman stolen. The mugger claimed he had a gun and Allen took no chances. But he made it clear that these sorts of circumstances weren’t just a thing of the past, but their predictability had changed. “Crime is less concentrated than before. It can happen anywhere now.”

He added: “New York is less predictable. Brooklyn blocks can be the worst, because they’re like a quarter gentrified and three-quarters hood.” He was spared a lot more incidents because he was broke and was recognized as such. There was a memorable instance he recalled where someone attempted to mug him after asking him for change. Allen said he had none, so the pursuer demanded that he jump. When the sound of coins did not follow, he was left alone.

People were always looking to use Allen as a proving ground, looking to pick a fight.

Growing up impoverished and with no father present, Allen acknowledges that he could have developed into a very different person, especially as it relates to violence. “A lot of people are raised in circumstances where they have to front super hardcore.” If they show any sign of weakness, Allen explains, they may be inviting violence.

Which is what these games provide, among other things: a safe place to fight. Whether the source of aggression is economic disparity, racial profiling, macho prescriptiveness, or anything else, sometimes a digital space is the only way to work off the anger of feeling trapped and helpless.

Treachery in Beatdown City is on Kickstarter with a few days to go.