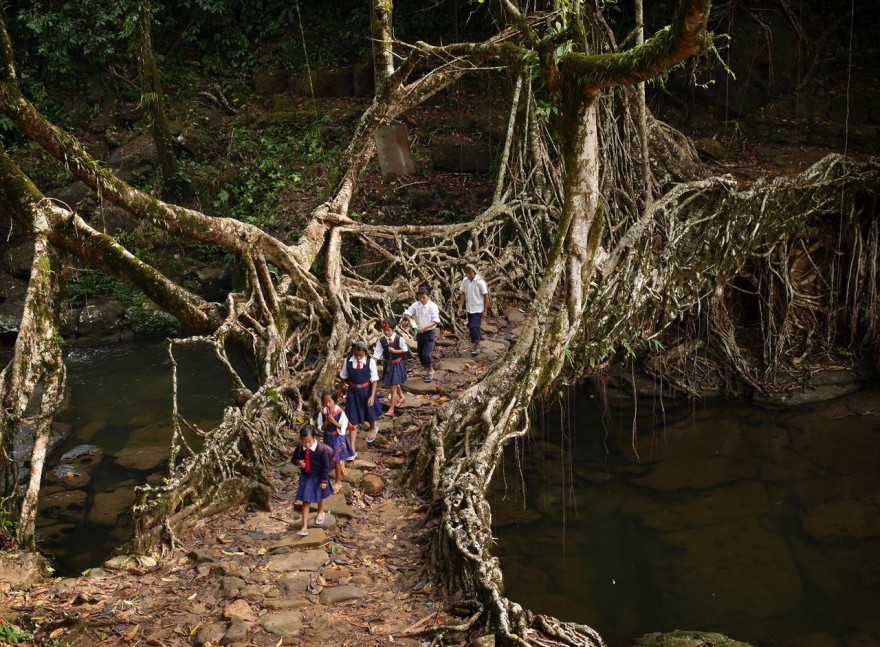 Photographs by Amos Chapple via The Atlantic

The village of Mawsynram in Meghalaya, India, has been given the status of rainiest place on Earth. It rains there every day. According to The Atlantic, it receives 467 inches of rain each year (New York gets only 60 inches per year).

This explains why Amos Chapple‘s photographs of the place show villagers during peak monsoon season bent double wearing upside-down boats just to walk down the street. These are traditional, full-body umbrellas known as “knups,” designed to keep both hands free, and are made out of bamboo and banana leaf. You’ll see plenty of modern-looking umbrellas in the village too, but the population still relies on the region’s natural materials to get by as they’re the only ones that can truly withstand the torrential and unrelenting weather.

a play on nature’s original designs.

This is why creating bridges to traverse Meghalaya’s inevitable circuitry of running rivers was once a problem that desperately needed solving. What the villagers had to hand was wood, forests of the stuff, but divorcing it from its roots meant that it rotted in rapid time. The solution? Bend the trees to become “living bridges.”

Centuries ago, the locals started to make bamboo skeletons that curled the roots of ancient trees into bridge-like structures. Thin aerial roots are tied into taut knots, tiny fists of coiled tree tendrils, in order to hold it all together. There are also “living ladders” made of embroidered tree branches to help the villagers ascend the steep and slippy banks. All of the construction work is a play on nature’s original designs.

The result is a dichotomous marriage of human-serving structures and naturally formed forests. It gives the impression that a) these trees are somehow more intelligent than their typical ecology allows, or b) that they preserve traces of ancient ruins that humanity once built and nature slowly recaptured, usurping its form.

the trees become a substitute for missing architecture.

The bandwidth required to take in every twisted detail of the moss-covered webbing of these bridges is enough to send you into a prolonged stare. And yet, despite this arresting effect of Chapple’s photographs, my brain insta-snapped, as if trained by instinct, to draw parallels to memories of fighting against the formidable ruins of Dark Souls.

There are ancient, ginormous trees that reach impossible heights in Dark Souls. These trees stretch up from the black water of Ash Lake (the lowest point geographically of Lordran) and up into the open skies of the Undead Parish. The trunks are used to hoist the rickety platforms of Blighttown along the way, which is where you can also find The Great Hollow; a terrific and tricky staircase formed inside the guts of one the gigantic trees.

Due to the ruins found throughout Dark Souls the trees often become a substitute for missing architecture. Before you travel back in time to the Royal Wood, you’re able to trace the carcass of its masonry in the Darkroot Garden. Here, greenery has taken back over, coiling around and collapsing the broken stone structures into conquered heaps for you to traverse.

And so it’s not uncommon to cross from branch to stone bridge and back again when navigating the outer reaches of Lordran. It’s a place where nature and construction have met as one over time, not quite in the same way as in Meghalaya, but close enough to incite comparison.

Dark Souls 2 continued this thematic unison with areas such as the Forest of Fallen Giants. You scramble up tree limbs curled over stone ruins, brush past moss and vines with your armored shoulders, and find new spaces by clambering across slopes and platforms provided by deviant branches.

nature is synonymous with humanity’s downfall

You were taught to inspect nature’s formations for any unexpected paths in the game’s first area, Things Betwixt. Here, there are tunnels through tree trunks, and precarious log bridges to out-of-reach items. As with Meghalaya’s “living bridges,” the ecological becomes the architectural across both of the Souls games, whether willingly or not. Predictably, this motif comes to a head in the same way in each game.

In Dark Souls, you face the The Bed of Chaos, which is a large sentient tree-like creature with trunks for arms, branches for fingers that sweep you off your feet. It is the source of all demons; the center of chaos. Taking this knowledge and combining it with its form suggests that nature is synonymous with humanity’s downfall. Before reaching it, you must creep through the dead city of Lost Izalith which, fittingly, has been overtaken by tree matter. Crooked twigs line the ground and dried up roots get in your way as they stretch over old temples, as can be seen at Cambodia’s Ta Prohm Temple.

In Dark Souls 2, it’s when entering the dreaded fog of the Shaded Woods that the first sign of nature not having enjoyed humanity’s enforced deference upon it appears. In these woods, ghosts hide invisibly among a populace of veiled trees to strike you in the back. Some invaders are petrified in agonized poses, their limbs curled to mimic the gnarled fingers of the trees around them, as if nature has exacted revenge by turning humanity’s own methods upon itself.

Hopefully, the people of Meghalaya won’t have to suffer similar consequences for their reshaping of nature’s children. At least they have let nature prevail in its original substance if not its intended posture. It’s husbandry rather than manufacture. They have found a way to work with nature (out of necessity) rather than against it. So, unlike the grand forts and stonework of Dark Souls‘s Lordran and Dark Souls 2‘s Drangleic, Meghalaya’s living structures should endure even without human upkeep.

H/t to The Creator’s Project