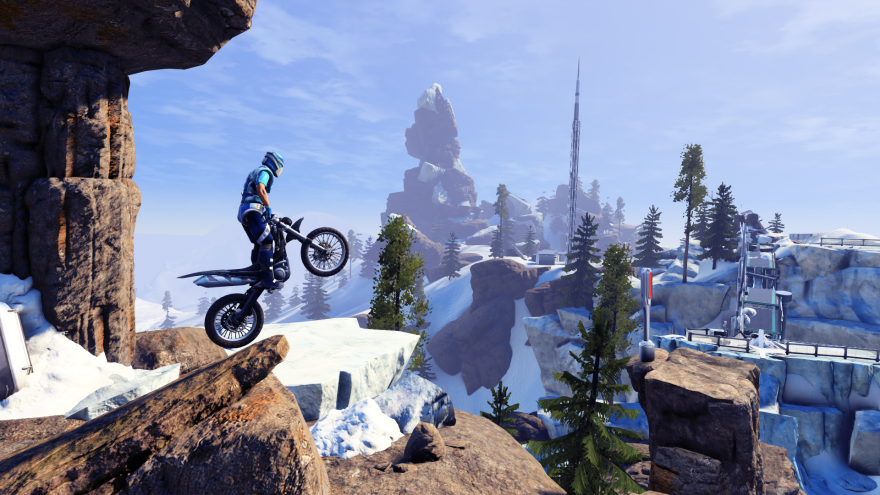 And they keep falling until they crash to their deaths, which happens all too often. Upon contact, limbs flail as motocycle parts litter the tracks on which the riders race. It’s ugly.

Perhaps it’s not as grim as it might seem. As the game’s omniscient AI suggests (and some predict), the riders are part human, part machine, engineered by a mysterious corporation. When they crash, they can regenerate instantly, seemingly because the corporation has an unlimited supply of “biomass.” (This is hinted in the game.) In turn, the player controlling them has plenty of reason to experiment with these soulless riders, capable of gravity-destroying flips and contortion across futuristic tracks that range from factories to alien invasions. If they’re expendable, why not have some fun with them?

The question is where the most fun comes from in Trials Fusion. “Career Mode” rewards the player for depleting as little biomass as possible (i.e., keeping the riders alive), while the community-created “Track Central” mode focuses on creativity and experimentation at the expense of many, many deaths (i.e., retries) without consequence.

The player controlling them has plenty of reason to experiment with these soulless riders.

Career Mode imagines eight sets of tracks, arranged thematically with a futuristic bent, traversed with bikes that vary in speed and control. Urban Sprawl pits riders against skyscrapers and blimps; Arctic Open subjects them to snowy cliffs. The first five sets of tracks are rather easy to complete with honors. That is, every time a rider completes a track, they can get a bronze, silver or gold medal, even if they died once or twice. Those successes unlock harder tracks and the accoutrements of motorcycling—helmets, jerseys, wheels. And so you run through the track repeatedly, experimenting with the riders and taking in the designs of the tracks. Each retrial is another opportunity, for instance, to see how many backflip-Superman combos a rider can do in one jump. Thrills come easy––for a while.

Unfortunately, by the Career Mode’s sixth set, Skill Showcase, those thrills do not exist.

The game suddenly comes off as a brutalist hell ride, causing dozens of deaths before a single track is completed. Skill Showcase, in other words, is engineered with impossible jumps and inclines that require the utmost precision on the rider’s part. In one playthrough, I spent 10 minutes attempting a jump across a broken bridge; another time, I couldn’t bounce off a boulder onto a snapped tree. These kinds of obstacles signified a rather abrupt change in Career Mode’s arc, as if the mysterious corporation suddenly turned against its riders. You may not enjoy these tracks, but if you want to progress, you will memorize them.

In contrast, Trials Fusion’s Track Central mode, a portal to tracks created by players, is a sort of respite from the latter challenges of Career Mode––if only because death isn’t a big deal here. While Track Central is nothing new to the series, this version fits the master narrative of Trials Fusion: it presents a future where death can be fun because the riders, in part, are expendable. The mode features more than 1,800 tracks of wildly disparate experiences. One track may have a rider flipping down more than 100 stairs, and another may subject them to sun-searing stretches of a barren desert.

In my days of dying in Track Central, I gave thumbs up to tracks with robot wars and neon overlays, later finding tracks with alien invasions and drops from million-story high skyscrapers. Just last night, in another track, one of my riders smacked his face on the concrete, only to bounce back into the clouds. Track Central gives into core of the Trials experience and allows us to relish in the waste of biomass. Sorry, riders: this is what you’re made for.