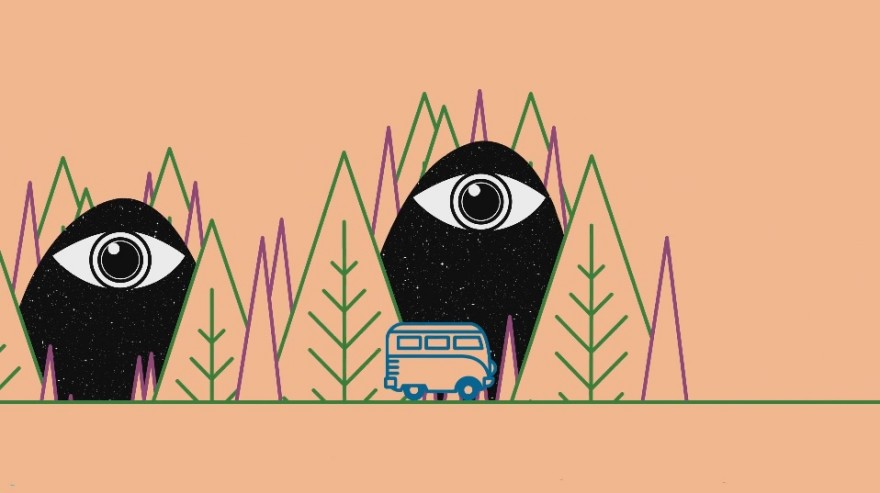 Half a year ago, Brazilian animator Antonio Vicentini turned multi-instrumentalist and musical director Fernando Barba’s song “Cheiro Verde” into a psychedelic animation following the magical trip of a morphing Volkswagen Bus (sometimes referred to as the “hippie wagon”).

The song has an organic sound to it, containing the excitement of a naturalistic acoustic production; all mouth-clicks, hums, and claps. This gives it a fresh, almost spontaneous rhythm that changes and stops irregularly. Its textural bandwidth increases over time too, building towards its crescendo, with new voices and slapping sounds added gradually.

Vincentini’s animation, entitled “The Trip”, personifies each of these new sounds as popping eyeballs and watchful tree-dwelling monsters, while also adding visible layers of bright color to the animation as the song’s complexity increases. He also uses absurd movement to capture the song’s energy: the VW Bus stretches its chassis and engorges its tires in dance, while a later scene sees several of the vehicle twirling up and down between a number of naked singing women.

Given the vivacity of the animation, matching Babar’s eclectic sounds, it’s no wonder why it became a Vimeo Staff Pick. It’s also this liveliness, creativity, and all of it being framed as a multi-part trip in a magical VW Bus, that apparently made it ripe for being turned into a videogame.

Henry Gosuen’s iOS and Android game The Trip isn’t just based on Vincentini’s animation, the animator himself has supplied all of in-game art. The result is an endless runner (or an endless driver?) in which you try to drive the VW Bus as far as you can. You do this by tapping your screen at the right time to make the VW Bus perform an utterly ridiculous series of somersaults into the air, neatly dodging other VW Buses and annoying eyeballs that can only sit and blink at you.

On the way, you’ll also collect some shapes that morph the VW Bus, just like in the animation. So you’ll grow wings and find stretched and distorted versions of the VW Bus blocking your air space. The other possibility is the VW Bus suddenly being on hydraulic stilts that you need to operate to dodge parked vehicles.

The videogame looks nearly exactly the same as the original animation, with the only caveat being that you have to perform well in order to see the more wacky material. It starts off tame, but soon you’ll meet rainbow-colored jellyfish and the unmissable monsters that peek out from behind the trees.

The Trip is quite the eccentric ride, then. It probably won’t last you long, but it’s significant if only for the multimedia transformation it has seen; from song, to animation, and now to videogame.

You can download The Trip for free on the App Store and Google Play.