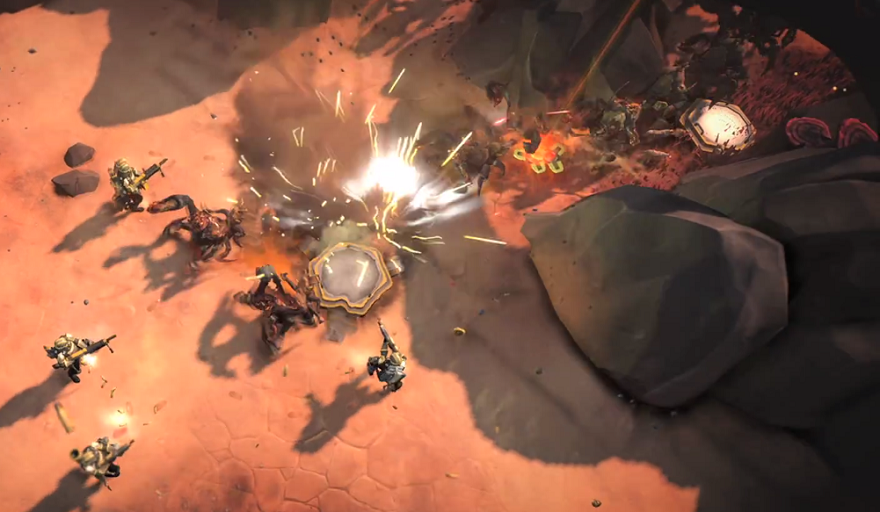 My Helldiver’s pod penetrates alien soil with a heavy thud. I call in a machine gun just in case things get hot when a bug scout signals that someone with enough firepower to level a forest is making his way toward their hive. Soon, I’m knee-deep in insectoid guts when two more pods fall to the earth (one on top of a rather large enemy), and two more divers emerge ready to give them hell. We form an unstoppable wall of fire, each character shouting gleefully at the carnage. A fourth member descends from the sky right on top my character with a sickening splat. But it’s no big loss. Super Earth has ample reserves to throw at the enemy, and I’m soon back into the fray, spreading democracy one round at a time.

Like everyone else playing Helldivers, I immediately thought of Paul Verhoeven’s 1997 film Starship Troopers at the game’s launch screen. The game’s triumphant score, propaganda newsreel, military hyper-violence, and rampant xenophobia all seem cut from the same satirical cloth as Verhoeven’s film, and Helldivers delivers a humorous punch as sharp and strong as Johnny Rico’s chin. The game imagines a similar globalized earth in which technological advancement and general human progress has led to globalized post-democratic Super Earth, a monolithic entity that uses the rhetoric of colonial liberation to justify its rapid expansion across the galaxy. As a nameless Helldiver, Super Earth’s elite troops, players carry out missions to bring order to aliens that for whatever reason don’t want to be liberated through a show of military superiority.

Of course, to the controlling powers behind Super Earth, “military superiority” means overwhelming numbers of disposable troops and high-tech weaponry. The propaganda splayed across the screen insists on the player’s individual significance to the cause while constantly sending her on suicide missions of dubious import. The player’s action-figure character, whose individual characteristics are obscured by masks and armor, is just another piece of potential collateral damage to pave the way for a warped concept of democratic exceptionalism. The mission matters more than the individuals liberating planets from their hostile alien colonizers, thereby ensuring the safety of future generations.

The game’s tongue-in-cheek fascist utopia setup proves to be its masterstroke. What begins as a one-note joke about hyperviolent military games turns the standard twin-stick shooter formula into a ruthless parody of government brainwashing. Helldivers’ isometric perspective and tech fetishism brings to mind Third Reich propaganda films, most notably Leni Reifenstahl’s Triumph of the Will, in the way it frames the racial supremacy of Super Earth within a perceived moral obligation to spread culture.

showing how war games can make virtual fascists us of all

All aesthetic decisions in Helldivers reinforce this position that the player is always an ambassador of a godlike government power. From the isometric perspective, the Helldivers look small but powerful against the weight of the foreign hordes, and calling in weapons, ammo, vehicles, and other players makes them rain down from unseen ships from above. Even conversational bits from the soldiers on deck hint at government surveillance and election tampering to keep the people happily subjugated.

As the missions fall into occasional bouts of checklisting, the lackluster variety is helped through the game’s totalizing multiplayer features. “Liberating” planets through missions feeds into a massive progress tracker that syncs up with every player in the world. Playing Helldivers becomes a massive communal effort on the part of every player to advance the cause of Super Earth and spread civilization. Seeing other players’ names on giant spaceships always acknowledges the unified war against those who dare resist the strong arm of democracy and thus contextualizes the significance of each mission into a much larger march of progress. This constant stream of data has the all-too-appropriate effect of reducing the human element of the war to ruthless calculus, all for the sake of perpetuating Super Earth’s supreme destiny.

The future in Helldivers would be terrifying without the game’s unapologetic, visceral humor. The dramatic irony of knowing that Super Earth is a fascist machine makes the ruthless difficulty and slapstick violence against the Helldivers themselves, either from hostile opposition or friendly fire, all the more palatable. In my time with the game, I have accidentally killed as many squadmates as I have caught stray bullets to the head, and almost each mistake was met with a laugh from myself or the other players. Everyone knows they are expendable because everyone is in on the joke that we are all playing for the wrong team.

By showing how war games can make virtual fascists us of all, Helldivers takes its place as one of the sharpest critiques of videogame imperialism. Granted, it’s not a particularly new observation, but the game delivers it with such bravado in both action and atmosphere that it warrants commendation. To enlist as a Helldiver for Super Earth admits culpability in a system that disguises tyranny as heroism. Helldivers measures its brutal difficulty against a dehumanizing military and political complex that results in humor and violence, both about as subtle and hard-hitting as a freight train. Such is the price of liberty, paid in full with a pile of shell casings and the sickening splat of another expendable soldier.