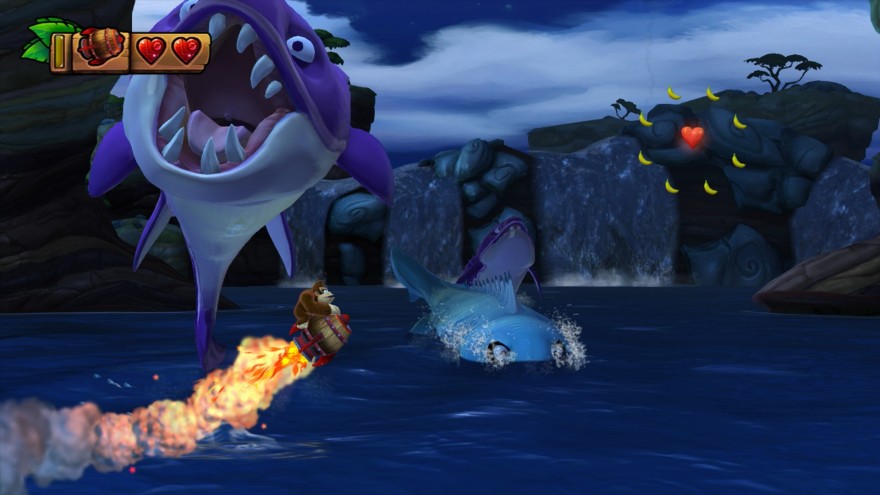 Why do we even pick up coins in games? They don’t make us richer. They don’t accumulate towards our 401Ks. A lot of the time they don’t even add up towards a high score you can brag about.

Tropical Freeze’s bananas and banana coins float there in meaningless formations. That they float in such a way that makes them harder and more time-consuming to collect makes them extra annoying to go after. And yet, during my first couple hours with the game, I jumped after every single one of them, sometimes chasing them off cliffs and to my death. I did this because games trained me to collect, to accumulate, to behave like a consumerist little piggy even in my escape from the all-encompassing consumerist reality.

If you go to Funky Kong’s Funky Fly and Buy shop (clearly a gray market operation), 100 bananas will buy you a red balloon, which is like an extra life. I had more than 20 of those when I stopped playing, and even if I depleted them, I could have just kept playing from the beginning of the level. Banana coins, on the other hand, can be spent on temporary improvements: more hit points, tougher vehicles, and other things that will supposedly make playing the game easier, but that you don’t really need. If you want, you can spend the banana coins on random trophies, modeled after different characters in the game.

The problem is that I wouldn’t want them even if they were real trophies I could put on my shelf. I was done with stuff for stuff’s sake after I packed and moved apartments a few times. In digital form, these tchotchkes are beyond useless, and kind of gross if you want to be anti-materialistic about it (which I do).

I don’t know what I would use an oversized, novelty Donkey Kong tie for other than to hang myself with in protest of landfills worth of such swag

How obsessed with things are we that we can derive joy not only from accumulating real, physical Nintendo paraphernalia, but also the simulation of accumulating Nintendo paraphernalia? Here’s how: at the preview event I attended every person was given a giant red tie with the DK letters on it, like the one Donkey Kong wears. They brought them because they knew people would take them (they did). They want them. It makes them happy. I don’t know why. I don’t know what I would use an oversized, novelty Donkey Kong tie for other than to hang myself with in protest of landfills worth of such swag, which sooner or later will become one with a quite literal ocean vortex of plastic bullshit.

Banana coins and the digital trophies I can buy with them, like novelty Donkey Kong ties, are not valuable to me, and therefore must be fun to collect in their own right. I would have to play more of the game in order to determine if they are, but none of these pretend currencies are going to survive in the long run. Banana coins, Mario’s coins, Zelda’s rupees, Sonic’s golden hoops: Their perceived value mostly just helps make these games last longer. They pad out empty spaces in levels, giving you something to do before you get to the thing you really want to do. But adults know that the most valuable resource is their time. Cynically designed free to play games have already proven that we’ll pay real money to get through games faster. The banana coin economy is bound to crash.