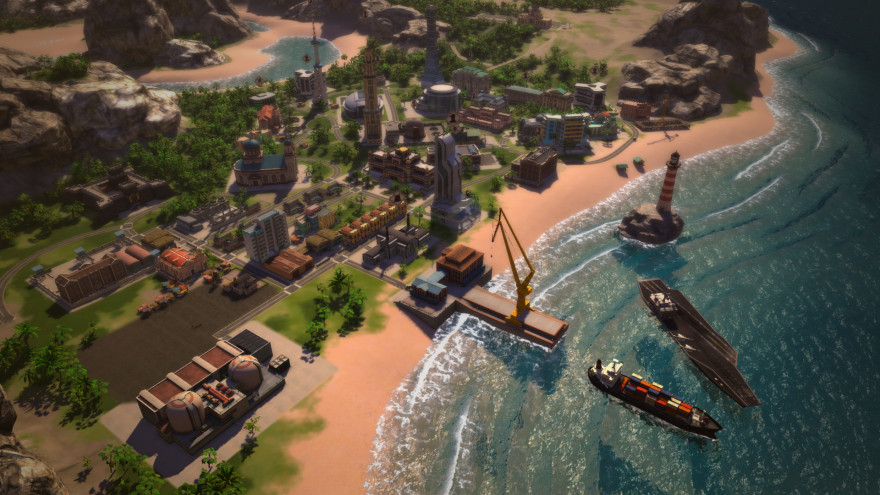 My people are starving, and there’s nothing I can do.

It wasn’t always this way. Before the world powers butted heads, my people bucked the yoke of a corrupt monarch. Its weight strengthened our suffering shoulders till we could toss it aside, and we finally felt the lightness of the air. But now we buckle under the weight of the world and teeter according to its whims. And all the while, my heiresses bicker over what our national bird should be.

Tropico 5, like its predecessors, casts you as El Presidente, the Communist leader of a fictional banana republic. You control everything: housing, infrastructure, healthcare, international trade, voting rights, hiring managers for individual businesses (given that they’re government-owned), budgets, military/police presence, foreign relations, public relations, and the demands of several factions—communists, capitalists, environmentalists, industrialists, royalists, secessionists, the religiously devout, and so on and so forth. But whereas most cities in city-building sims traditionally exist in continual stasis, your island in Tropico 5 is subject to the passing of time. Your dynasty presides over Tropico across the Colonial Era, World War II, the Cold War, and the present day.

But now we buckle under the weight of the world and teeter according to its whims.

The changes that occur between eras, though simple, are more than just aesthetic swaps. Your comrades could witness an era of prosperity as they loosen the King’s grip in the Colonial Era; you could make a killing exporting livestock and iron to other countries. But then—oopsie-daisy, Germany invades Poland, and the whole world changes. Gone is the demand for foreign meat, because in the post-colonial world, every variety of livestock has been spread far and wide. Gone is the demand for iron, because industrialized warfare demands steel. And gone is your golden age; your lifelong citizens, along with the hundreds of people who immigrated into your country seeking opportunity, are poor, hungry, and restless.

The characters of Tropico are drawn in broad strokes, but the canvas they’re drawn on is broader. Everyone and everything is a caricature: your underling, Penultimo, is a dimwitted, unceasing bootlicker; capitalists and opportunists within your staff seethe with delight as they suggest profiting off other nations’ needs, while communist revolutionaries are naively passionate about their cause despite not knowing exactly what they’re fighting for. Entire political institutions are mocked; early in the single-player campaign, a Marxist reveals that the Russians are exporting the Communist Revolution as a buyable service. The game itself, on occasion, preemptively mocks your decisions; as you decide over voting rights for Tropico’s declaration of independence, your options are described as being based on “chauvinist gender discrimination” (male-only voting), “reactionary wealth discrimination” (wealthy citizens only), and “crazy liberal ideals” (equal voting). That last one can be read as sarcasm—but after a mere half hour of trying to please as many factions as I could in my little island, I found my agenda spread thinner than my citizen’s stomachs. When dropped in a sea of broad characters, the player has no choice but to become a broad character, too.

It reminds me of the end of the sardonic 2001 musical Urinetown. Before he is overthrown in the climactic coup d’etat, Caldwell B. Cladwell, the antagonist, enforces absurd fees and limitations on the citizens’ bathroom use, public or otherwise. His daughter, Hope, who helps stage the revolution, assumes his throne and lifts the burden of bathroom restriction from the oppressed holder-inners. Their heavy toilet use immediately drains the dwindling water supply that those hefty restrictions were made to conserve, and they slowly die of thirst.

Like Urinetown, a Tropico 5 playthrough can be a stark reminder that the value of freedom over order is not always a given, nor is the definition of either. The Tropico franchise’s marketing and theming has always worn a fascination with somewhat loopier dictators on its sleeve, almost to the point where the player is encouraged to try to be as loopy a dictator as possible. As though for inspiration, the loading screens display fun facts about dictators; did you know Kim Jong-Il claimed to have been a prolific writer of operas? The gameplay itself, however, gives you the option without forcing you to be one. The result is a sandbox for idealists and pessimists to prop up simulacra of their principles, and see how they fare under endless rains. With jaunty merengue playing throughout.

The world is on the move, and countries that aren’t moving with it are left in the dust.

Once the game forcibly stripped me of my lofty, postgrad ideals, I felt free to forget about them just so that I could win. In life, I like to imagine the possibility of a world where teachers, mine workers, and nuclear technicians can make the same salaries—that nobody’s happenstantial skills should be prized above anyone else’s. In Tropico 5? Screw that. The world is on the move, and countries that aren’t moving with it are left in the dust. None of my citizens are going to invest their lives in the future of energy production if I don’t invest a thicker chunk of their tax dollars in nuclear technicians’ salaries. The people need a nudge. You need to say to them—if all the other countries in the world get nuclear power and we don’t, we’ll be poor by comparison, and you don’t want to be poor, do you? Do you?

Whether I did this for the assumed good of the Tropicans, or to reap all their rewards for my private slush fund (it varies between save files), I was always reacting to outside forces that the game continually sent my way. If the Tropico franchise as a whole has any one lesson to impart, its that dictators are men trying to maintain stability in an unstable world—sometimes purely for their people, and sometimes purely for themselves. To play Tropico 5 is to look behind the cult of personality surrounding iconic leaders throughout history—who are both lionized and loathed—to understand the rationale behind both their atrocities and their good deeds. The loopy dictator is only as loopy as the world that made him; his brand of insanity merely combats the surrounding insanity. Tropico is an open invitation to either revel in it or understand it.