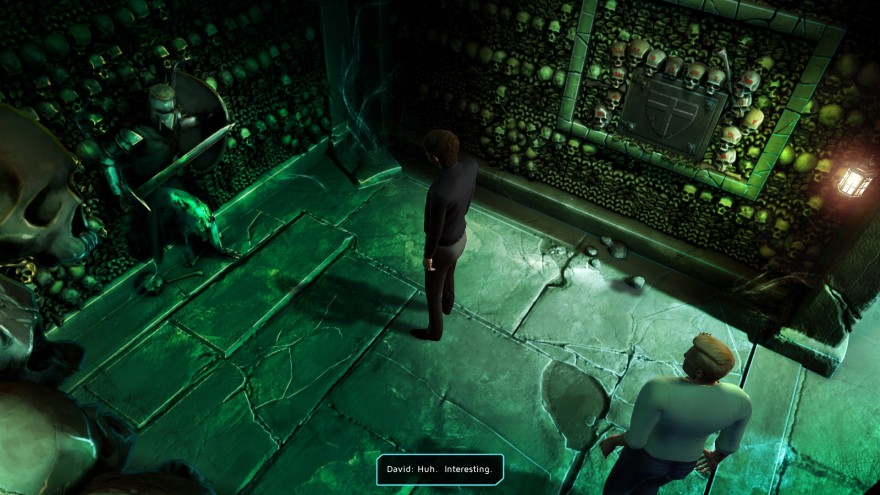 For 20 minutes, playing as Malachi Rector in Moebius: Empire Rising, a savant and technophile, I couldn’t get a coffee right for a lonely librarian who I needed to woo so I could access some encrypted archives on a knight of The Crusades. A splash of cream mixed with a packet of sugar? It’s not quite right, Malachi thought. Two splashes of cream? Too much. I had to start over, buying a third cup of coffee. A splash of cream, two packets of sugar, topped with cinnamon shaped like a star? Nope.

“It’s fucking coffee!” I screamed, standing up from my chair. “Why is it so goddamn hard to make coffee?” Two chapters before this, I was fixing an air vent in Cairo so I could win a dart game against a con man. That took almost an hour to figure out. In the coffee shop, I felt the same rage boiling in my ears.

At its core, Moebius: Empire Rising is a graphic adventure game that unravels with Rector’s investigations into scientific theory––namely, the Moebius Theory, which argues that history follows a cyclical pattern, thanks to a fourth dimension. His story begins with an intro e-comic that illustrates a pre-teen Rector blowing minds with his chart-shattering IQ and, sadly, losing his mother to an accident. The game, following that continuity, finds Rector single, friendless and distrusting, yet highly valued for his expertise in profiling individuals and appraising antiques, plenty of which he maintains in a shop in Manhattan. He lives on his smartphone, and he would rather solve mysteries, including that of the Moebius Theory, than strike up polite conversation, let alone settle down with someone. The money is good––maybe too good. This much is clear in every chapter of Moebius: Empire Rising, the story of which progresses through his interactions with NPCs and objects, even as mundane as an espresso counter or something else.

While it is true that Rector has enemies on his trail, the true antagonist of the game is the mundane, the many clickable objects with which he can interact. Let’s not speak of the coffee instance or the dart game in Cairo anymore. Another instance of mundanity might be the moment where Rector needs to gather a VIP pass to meet a senator at a rally. That task involves a pair of scissors, some glue and a sex addict. Going into it, I knew that Rector was a wealthy, connected man who could quite easily pay his way into the VIP room. But Jensen, I guess, wanted me to work for it, to feel Rector’s impenetrable attention to detail. It was an example that with time and intellect, not money, he can solve anything. Just be ready to click, click, click, click ….

In all fairness, Moebius: Empire Rising has a staple of graphic adventure games: completing puzzles, an example being that you need to talk to x, but first you need to complete b, d, and a, and only in that order. Games like this require gallons of patience that I try hard to keep from boiling over as I point and click, click and point, etc.. They’re not only slow moving––their puzzles are just fucking hard to figure out sometimes. But more often than not, as I can attest after playing such series as King’s Quest and Jensen’s own Gabriel Knight, puzzles can reveal exciting moments of a narrative; they have a purpose other than slowing a player down. In the case of Moebius: Empire Rising, completed puzzles reveal Rector’s incredible knowledge of ancient history and how it’s potentially repeating itself through targeted aristocrats and the like. Factoids on Roman politics, the Crusades, the Catacombs of Paris and so forth surface on his smartphone, and they illuminate Rector’s central conflict––understanding himself.

It can take a few hours to realize that conflict. As the plot of Moebius: Empire Rising moves forward, latter puzzles lead to cutscenes that depict Rector’s panic attacks, often induced by his near-psychic intelligence; in one scene, his mind becomes a sort of black hole, a mental vortex seemingly outside of time and space. When I played, that one, in particular, that felt like a reward for solving the game’s difficult puzzles, including the coffee incident.

Which reminds me: I did eventually figure out the missing ingredient to that perfect cup for the librarian. She needed a heart of sorts.

And it wasn’t until later, when I settled down and reflected on the game, that I realized a potential purpose of such mundane tasks in Moebius: Empire Rising: Jane Jensen wants you to feel––not just see––the psychology of Malachi Rector, a man scarred by a family tragedy, and tormented with a genetic gift. If that is indeed the primary purpose, then I applaud Jensen.