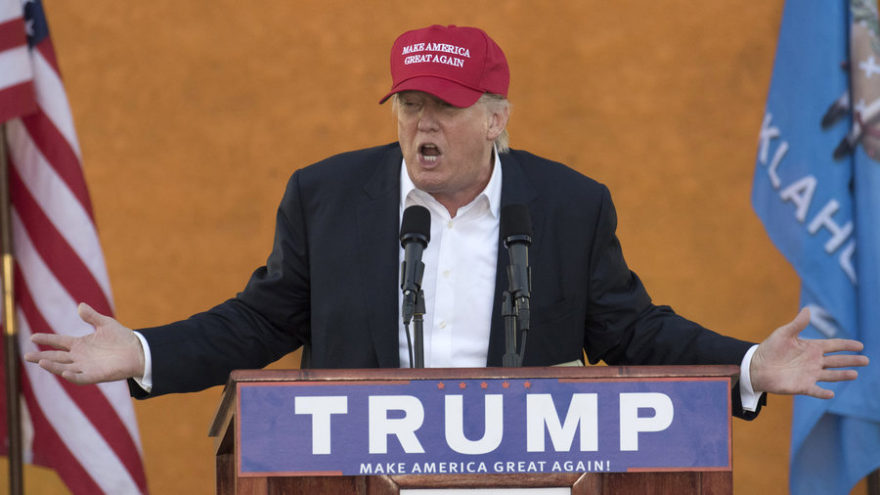 Unless you have been living under a stack of StarCraft II: Wings of Liberty Collector’s Edition boxes for the past year and a half, you’ve probably heard that a six-foot-tall, pasty, third-grade-vocabularied sack of racist bile and vitriol, ensconced in an expensive suit and a greasy toupee, has a small but non-negligible chance of becoming the next president of the United States of America. Approximately six billion trillion words, across every publication this side of the asteroid belt, have been written on the potentially disastrous ramifications of this misanthropic cheese golem getting his hands on America’s Supreme Court, nuclear arsenal, and wall-building capabilities. This article explores the potential effects of a Trumpocalypse on perhaps the sole arena nobody has thought to write such an article about: the vibrant, burgeoning, and fundamentally international phenomenon known as D I G I T A L S P O R T S.

It’s not just that Donald Trump hates videogames. (“Video game violence & glorification must be stopped—it is creating monsters,” he tweeted after the Sandy Hook massacre in 2012). The problem is that Donald Trump bases his entire platform on xenophobia and keeping people out of America, making him a natural enemy of esports, which is all about people from around the world coming together to compete, often in venues that happen to be located in—you guessed it—America. Esports athletes already have plenty of trouble getting visas; just ask Super Smash Bros. Melee player William “Leffen” Hjelte, for whom not even 118,000 signatures and a White House response on a petition back in May were enough to secure passage into the States by this weekend’s EVO.

Trump is the natural enemy of esports

Getting a U.S. P-1 athletic visa, as all serious international esports competitors are eventually forced to do, is already hard. The visa process is an arduous journey across a landscape of paperwork mountains and red-tape jungles. It’s a ritual so complex and arcane that it practically necessitates an entourage of lawyers, and even when every precaution is taken, the fate of the application ultimately comes down to factors like how cranky and bloated the relevant customs official feels on the morning in question. All day long, in the bowels of whichever crumbling Washington mausoleum the U.S. Citizenship and Immigration Services (USCIS) occupies, men and women squint through bifocals at imposing sheafs of paper output by the multibillion-dollar immigration law industry, and try to answer questions like: does this Chinese/Swedish/South American/etc. person who claims to play videogames for a living actually count as an athlete?

Donald Trump doesn’t have to do much to make things worse. His mere election would send a signal that it is okay to hate and fear foreigners. Were such a message to trickle down through the USCIS organization, say because Trump put one of his foamy-mouthed cronies in charge, the all-important ground-level customs officials might become more suspicious, and thereby less inclined to deem fringe cases like esports valid justification for an “Approved” stamp.

Visas are a concrete example, but the more insidious threat of a Trump presidency is less tangible. Take the case of Syed Sumail “Sumail” Hassan, one of the youngest and most recognizable faces in the Dota 2 scene, whose family recently immigrated to America from Pakistan. Would Sumail have made it into America and become a central pillar of Evil Geniuses, the most successful North American Dota 2 team, in Trump’s world? Not if the blustering bankruptcy tycoon’s proposed ban on immigrants from areas of the world with a history of terrorism had been in effect. Children of immigrants fill the ranks of America’s esports teams; harsher laws might deny the Greatest Country on Earth™ its next generation of players.

Children of immigrants fill the ranks of America’s esports teams

Then there’s the rest of the world to think about. Xenophobic American policies might provoke other countries into erecting similar restrictions. In a post-Brexit, closed-border era, esports might be segmented into regional pockets, the way it was before an infusion of money and viewership made it possible for tournaments to fly players halfway around the world every other month. Small, fragmented esports scenes have a tendency to stagnate; the modern competitive landscape is interesting precisely because it involves such diversity of players, mindsets, and strategies.

Of course, there’s also the chance that President Dumpster Fire might drown the world in a nuclear conflagration, which would definitely be bad for esports. Or at least bad for the Melee scene: I have trouble envisioning even the most disciplined team of mutated cockroaches executing waveshines and L-cancels.