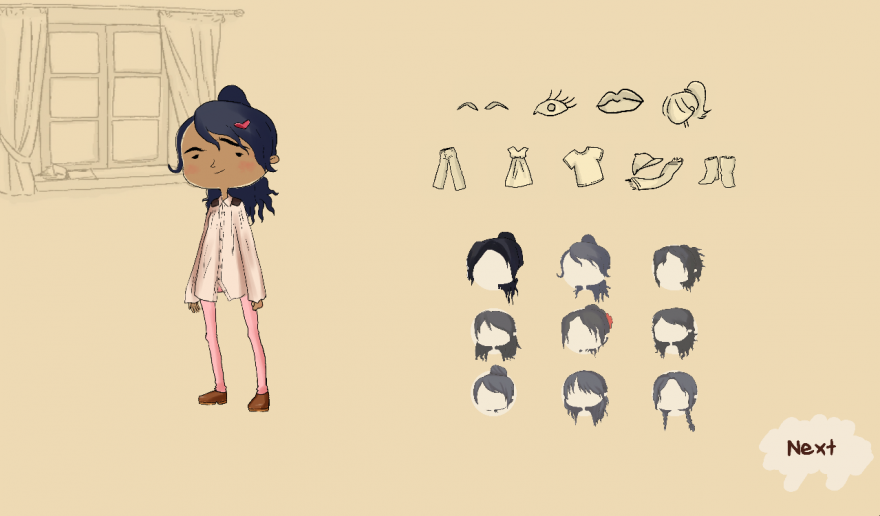 (Try to) Dress Up, created by Carnegie Mellon Fine Arts student Nivetha Kannan for an experimental games class, addresses an aspect of dressing up that Barbie never had to. Inspired by Nivetha’s experience of growing up in a mostly rural Indian family, it’s a game that calls for compromise rather than the usual freedoms of a dress-’em-up. Sure, you could just pick out the outfit and makeup your young heart desires. But when the time comes to try and walk out the front door, you’ll only cause a scene with your parents demanding that you change.

As an adolescent in America, rebelling against the constraints of her parents—a trait which seems universal rather than cultural—Nivetha found their rules unfair and ridiculous. She found refuge from their constrictions in dress-up games, particularly My Candy Love. “I played videogames with minimally dressed characters right in our living room, so my parents pretty much knew what I got up to in my free time,” Navetha explains. “Funnily enough, they were ok with a lot of that clothing—as long as it wasn’t on me.”

After growing up and understanding more about the expectations of women in most cultures, though, Navetha began seeing her parents strictness in a different light. “It wasn’t a rule my parents just made up themselves. Nor was it a rule that was designed specifically to inhibit my creativity and personal choice. It was a rule based on society. India has a big Eve-teasing and rape culture (something that is only starting to be addressed now). Even though the clothing I wear shouldn’t be an issue, it is because of rapists who point fingers and blame everything but themselves.”

The idea that people could point a finger at their daughter and say “she was asking for it” horrified her parents.

She realized that even in America, where she’d lived since she was only two-years-old, “a rapist could use the clothes I wear as a reason to devalue me and take the control I have over my own body away from me.” The idea that, if anything ever happened to Navetha, people could casually point a finger at her and say “she was asking for it” horrified her parents.

Today, Navetha can understand the good intentions behind her parents’ methods. In fact, “the years of not being able to dress the way I wanted made me appreciate the choice I have now—probably even contributing to me becoming a feminist.” She is now constantly aware of how lucky she was that the most retribution she ever got from her parents for being a girl was restricting her dress. “I know many friends whose parents came from India who are treated as maids or cooks in their house while their brothers laze about. But my parents always support me in whatever I do, and have aways encouraged me to become an independent and strong woman.”

What’s so fascinating about Navetha’s game, aside from the cultural and personal backstory, is just how difficult reaching a compromise might feel for some players. As a young Brazilian immigrant myself, my parents took the exact opposite approach to Navetha’s. Lacking any restrictions whatsoever, I started pushing the boundaries with my wardrobe at a young age, just to see what they’d let me get away with. My conclusion: everything. Aside from my dad (a Swiss man who emigrated to Brazil) yelling at me that I’d freeze to death, my mother complimented my clothing no matter how tight it was. In fact sometimes, I felt like the more sumptuously I dressed, the more love and attention she showed me. So much so that I distinctly remember asking them both why they didn’t “care about my reputation” more.

While sexism and rape culture are still rampant in Brazil, the idea of dressing conservatively remains oddly nonexistent for such a devoutly Catholic country. Maybe because of the heat? Or, mostly likely, because physical beauty is the most strictly enforced doctrine in that society. Because I guarantee that if I ever mixed navy and black together, or committed some other fashion faux pas, I’d certainly get sent back up to my room to change. Even the concept of forbidding make up was so alien to me that the first time my in-game parents forced me to take it off in (Try to) Dress Up, my instinctual reaction was, “Yeah, I definitely wore the wrong shade of eye shadow with that outfit. Point taken.”

Though I failed almost every single time I tried to achieve a compromise with my in-game parents, Navetha says there in fact is a way to essentially “win” the game. “If, from the very beginning, you choose to wear something that both you and your parents like, then it ends up being a ‘good day.'” But rather than designing the game around an absolute fail or win state, the feeling of achieving a good day in (Try to) Dress Up “is simply meant to represent the feeling of elation when you’re actually allowed to get out of the house in the clothes you wanted to wear.”

Despite the fact that they function as the game’s main obstacle, Navetha found ways to honor her paewnts’ good intentions in (Try to) Dress Up. One sweater included as an option for a top is a recreation of the sweater Navetha’s mom knit for her in real life. And when she finally showed the game to both her parents, “my mom thought it was funny and my dad was just proud and maybe a little weirded out about what kind of things I was making in school.”

Regardless of wether you yourself find the task of compromising your wardrobe difficult or relatable, (Try to) Dress Up provides a telling experience either way. After a lot of trial and error, I finally figured out how to successfully accomplish a “good day.” In that moment, I realized how the lack or restrictions and emphasis on beauty above all probably hindered me just as much from expressing the full range of creativity with clothing. There are no right or wrong ways of parenting, but rather just a general culture of sexism that tries to restrict women through clothing one way or another.

You can download and tackle the compromise in (Try to) Dress Up yourself on PC, Mac, or Linux here.