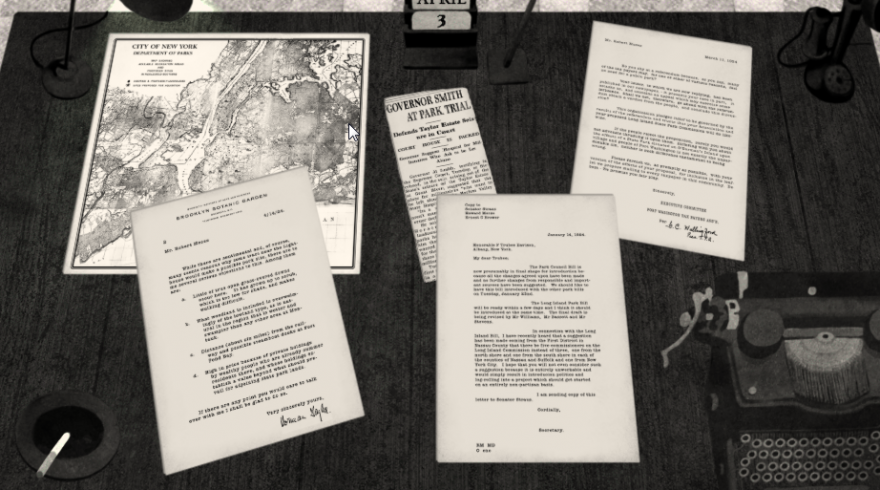 I didn’t know much about Robert Moses before playing Confetti with the Brick Bats. The creators of the game, New York Game Center students Alexander King and Noca Wu, didn’t know much about him either. That is, not before Tim Hwang’s “Power Broker” contest, which offered cash prizes to those that could turn Robert Caro’s 1,336 page biography of Robert Moses into a game. And so that’s what they did.

However, the game started out differently: it was planned to be a strategy game about building. But the team soon realized, through Robert Heller—a friend that stepped in to advise and later write the game—that Moses wasn’t much of a builder. It turns out he was more of a shrewd politician and a Machiavellian political operator. Moses didn’t so much build as will the city into shape around him as he sat in his office, making phone calls and sending out letters with ferocity.

the first time many of the documents have been digitized

This is the feeling the team then looked to capture, and that desire birthed Confetti with the Brick Bats, a narrative adventure. “We wanted to immerse the player in the mindset of Robert Moses,” said King. “So the game puts the player in Moses’s office, listening to the music that Moses enjoyed, and seeing the same correspondence that came across his desk. Each document represents a course of action for the problem Moses is facing, and after they’ve picked three they see the results of their choices as a newspaper headline and article.” It plays like a visual novel and the choices it asks you to make lead to between 50-60 different headlines.

There are no outside influences to inform your decisions and no real way to ascertain exactly what will happen as a result of your actions. That doesn’t stop the game asking you to look through the documents for three of Moses’s biggest choices. “We applied for access to the Robert Moses papers at the New York Public Library,” King said. “We only scratched the surface of the collection. It’s 200 boxes in all and we went through a chunk of those and ended up finding so many historical documents relevant to the time.”

It’s these letters that you end up virtually pawing at in the game. Perhaps most exciting for history nerds like myself is that, in many cases, the letters you read in the game are the first time many of the documents have been digitized.

It’s knowing this that had me feel like a detective while I played the game myself, choosing between the less crappy option of several choices laid out on the virtual table in front of me—bearable only because I knew the only thing I was doing damage to was the world inside my browser. And thank god. If you’re into political intrigue, investigation, and historical documents, you know what to do.

You can play Confetti with the Brick Bats right now on itch.io for Mac and Windows.