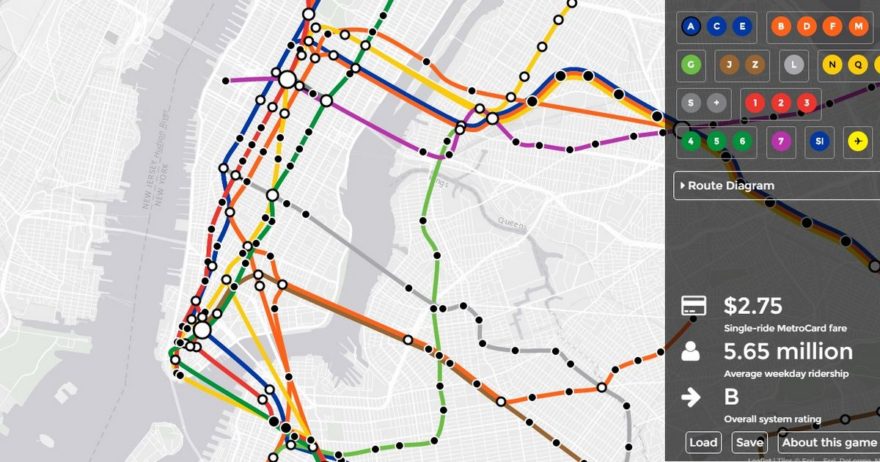 I’m not from New York, but even I know to avoid the 5. The largest rapid transit system in the world, New York City’s Subway links Manhattan, Brooklyn, Queens, and the Bronx to rush in workers from across the Tri-State area. Over 54 percent of New York’s citizens use the subway exclusively to commute. Millions depend on it for transportation, yet it’s been increasingly plagued by issues of sanitation, mechanical failure, and overcrowding.

Brand New Subway tasks you with improving NYC’s decaying subway system, while maintaining the delicate balance of cost and ridership. An intricately detailed experience, the game gives players more control over their urban planning endeavors than they ever could’ve hoped for. Stations can be placed almost anywhere, with lines intersecting every which way to lead them into the Big Apple. Using real census and transportation data, it estimates a given station’s ridership, while determining MetroCard fare based on the subway’s construction costs. Together, these numbers form a letter grade (NYC’s current system boasts a “B”), but bypassing that grade isn’t necessarily the goal.

Designed by J.P. Wright, Brand New Subway was submitted as an independent entry to Medium‘s “Power Broker” contest—honoring the Broker himself Robert Moses, the “master builder” of New York City’s now iconic subway system. Once a futuristic symbol of innovation, the nation’s aging rail systems are failing to hit the mark, as did its buses and roadways before it. It’s not uncommon for commuters in traffic to curse the names of the long-dead men who planned their cities. Many of America’s oldest metropolitan areas simply weren’t designed with enough foresight to accommodate modern means of transportation. Most cities, especially on the east coast, were purposefully designed to be confusing in order to hinder a British invasion. They were designed for horses and buggies and bikes—not Suburbans and hoverboards. Thus, many take issue when weaving through Boston’s many roundabouts, or New York’s paper-thin alleyways.

If you’ve ever played Sim City, you know that designing a public transportation system is not only arduous, it’s political. While, luckily, subways are generally convenient and extend far beyond city limits, at the end of the day they are built by for-profit companies. Metro rail systems often exacerbate the same accessibility issues that have existed since this country’s inception. For example, the effects of redlining are still apparent in many cities that are deeply segregated in all but name. In turn, these isolated low-income areas are often not deemed profitable enough to be given access to public transportation. Cities age and transform, gentrification spreads, and demographic shifts across neighborhoods.

Morality costs money in urban development, and though Brand New Subway pretty much gives you free reign over where you place your stops, you’ll notice that extending them to far-reaching, isolated areas will demolish your cost efficiency. Maintaining high-traffic and often repugnant stops is bound to upset some, but the cash payoff is undeniable.

Brand New Subway also includes New York’s proposed plans for a subway overhaul. As the city aims to complete improvements by 2025, the game lets its users work for them—allowing thousands of users to give feedback, catch mistakes, and even suggest all-around more efficient routes. The beauty of Brand New Subway is that, in its simplicity, it bypasses bureaucracy and politics for immediate results. Transportation, especially in the public sector, is a juggling act of cost, convenience, resources, and politics. Brand New Subway is an intricate tool that, after a few rounds, almost makes you miss the chaos.

Check out Brand New Subway here, along with creator J.P. Wright’s other endeavors in engineering.