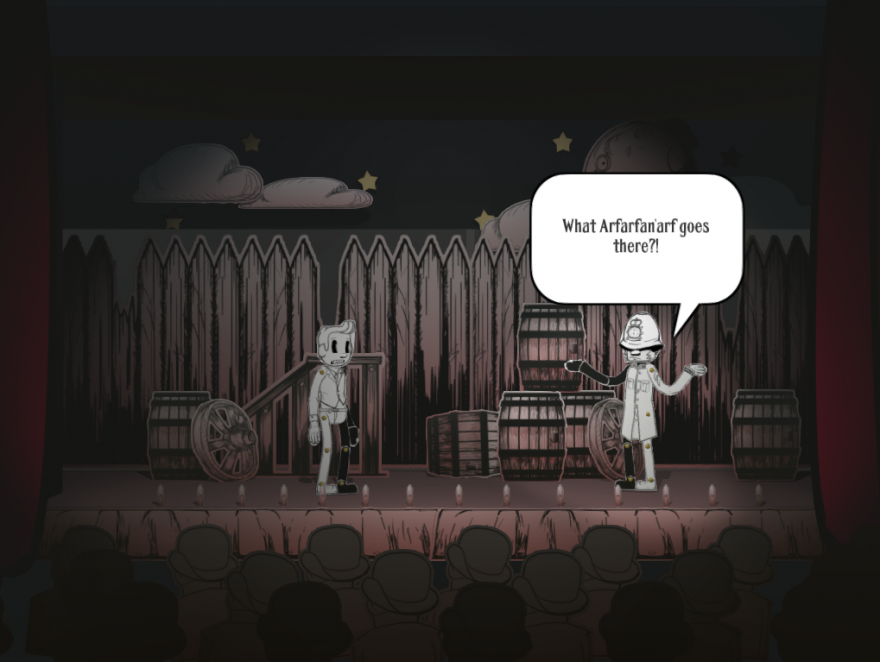 Key to acquiring mastery of a foreign language is putting what you learn into practice. The red-faced pressure that overcomes you when trying to speak, say, French to a perplexed native speaker forces your brain to spew out something French-like. Eventually, with enough of this traumatic practice under your belt, your uvular Rs and nasal vowels may form actual French words, enough to converse on such grand topics as your name and where you live. You’ve done it. You learned some French.

a playful lyricism to it

This intuitive approach towards mastering a language is your only choice in Victorian Era Linguistics Training Manual. Don’t be fooled by its title, this videogame is not a friendly how-to: it’s pure fumbling terror as you’re forced to select your choice of three incomprehensible sentences during each stage of an interrogation. They’re incomprehensible because the words you have to use, while still technically qualifying as English, are defunct slang from the Victorian-era cockneys. In other words: absolute gibberish to you and I.

What you end up doing, then, is half-guessing which sentence will get you in less trouble with the copper, or your wife, or the judge. It’s an activity that involves you trying to backwards engineer how a certain word might be used within the strange context you read it in. What, for example, would you consider a “rain napper” to be in the following sentence: “I was after a rain napper for my daddles.” Who knows (not I)? But it seems like a pleasant little sentence, doesn’t it? It almost has a playful lyricism to it; there’s something twee to be found in the phonetics. You could dance your feet to the one-two syllables of “napper” and “daddles.”

This is the process of reasoning that I adopted while groping my way through the game. I’d pick the sentences that sounded the dandiest. For what else could I have done? Not a lot. Except, afterwards, I did find this small guide to Victorian slang that may help. I learned that a “Coopered Ken” is, apparently, a bad place for a stick up. While a “Scurf” is a gang leader. None of this is that helpful. But you might turn to a source such as this if you want to try to subvert the challenge of Victorian Era Linguistics Training Manual. It won’t, however, help you to escape its script.

Oh, yes, there’s a script that must be stuck to, as the game is played as if a performance on a stage. This is theater. And so it turns out that your goal isn’t to help the character you play as to avoid going to jail—that will happen anyway. No, what you’re supposed to do is entertain the watching crowd of bowler hats in front of the stage. How you do this with the range of peculiar dialect you have to hand is something you’ll have to work out. All I could manage was to have the watching crowd walk out in a grumble. As far as I’m aware, the gesture meant the same then as it does now.

Oh, and if you’re wondering, I did manage to find out what “Arfarfan’arf” means. As revealed here, it translates from cockney to “half, half, and half,” which, by some twisted logic, ends up meaning extreme drunkenness.

You can download Victorian Era Linguistics Training Manual for free on itch.io.