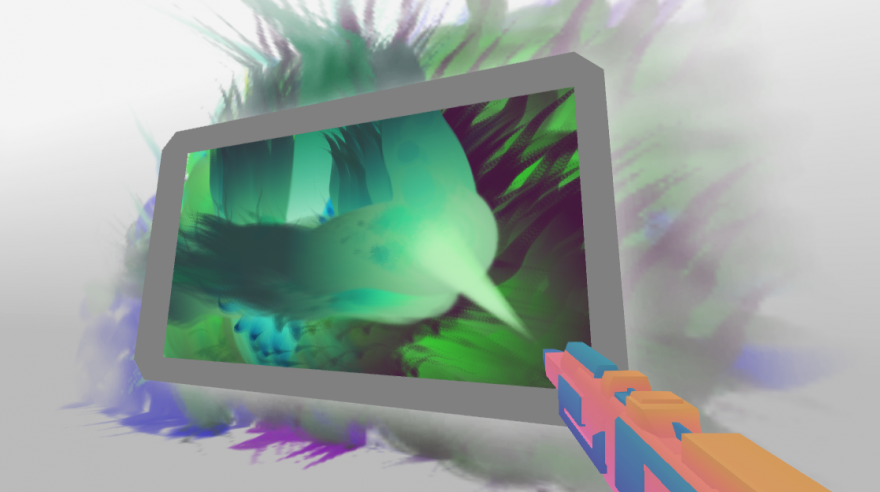 With Joy Exhibition, the enigmatic Manchester-based game artist Strangethink inverts the role he gave us in Secret Habitat. Once again, the virtual space is an art gallery, but this time we are the exhibiting artist and not the visitor. That said, we do seem to be a visitor of some kind, perhaps to a distant world, as all the people inside this enclosed art gallery are aliens. It is to these slow-walking mutes that we are told to “communicate” through our art.

You do this by making use of the 10 blank canvases and the many paint guns the art gallery affords you. But you are not the total artist in this scenario. The paint guns don’t shoot in a straight line nor in a single color so that you can determine exactly what you are painting onto each canvas. Instead, you are forced to play the role of co-artist to the procedural effects placed on each gun. Some guns may shoot in spirals, others in swirling stars, one that I used created an unpredictable cloud of green and pink smog.

You’re free to choose which guns to use (though you won’t know how any of them shoot), what parts of the canvas to shoot them on, and can also pick what distance to shoot them from—distance greatly varies how the gun’s paint ends up on the canvas. You also get to decide when each painting is finished and ready to show. But your control over the artistic process is still limited; forced to submit to the peculiar behavior of these paints. This turns out to be a running theme in Joy Exhibition.

The task initially seems simple. You create images for the aliens to look at and hopefully understand what you’re getting at. “What will you show them?” asks the game’s description. But that’s the problem: the paint guns wrestle authorial rights from you so that your intentions become swayed. Maybe you wanted to communicate the notion of love to these aliens and thought a plain love heart might do the trick. But as you can only paint in abstract forms this proves difficult if not impossible.

would they understand what your paintings are getting at?

Even if you are successful in painting this love heart on one of the canvases, do you really suppose that the aliens would understand it? Philosopher Ludwig Wittgenstein famously said that “if a lion could speak, we could not understand him.” By this he meant that the lion’s points of reference would be so different to our own that this attempt at inter-species communication would ultimately fail. Likewise, a love heart means something to us as it’s embedded in our cultures as a symbol of love. But the image of a love heart itself, to an alien such as those in Joy Exhibition, would have none of this prior association and so it wouldn’t have the intention you delivered it with. An even deeper problem than this would be trying to get the alien to understand the concept of love in the first place.

Therein lies the dilemma throughout Joy Exhibition. It challenges us to communicate with a foreign culture but acknowledges through its never-ending structure and absence of conclusion that this task is impossible. It may also have more to say about the nature of art and the interpretation of it, especially in the absurdity of the exhibition space, which is always so desperately engineered to help the visitor align with the artist’s vision. Ponder this: Even if the people in Joy Exhibition‘s gallery were regular humans would they understand what your paintings are getting at? The use of procedural generation doesn’t only distort your artistic intent but seems to allude to the impossibility of expressing oneself through art and further connecting to people through the resulting abstract imagery.

And yet, there’s something beautiful captured in that uncertain space between intent and interpretation. As the aliens in Joy Exhibition stand still facing your smeared canvases you can look on, longingly, hoping that they’re getting something out of it for themselves, even if it’s not what you had in mind (if anything at all). Perhaps that’s where the joy in the game’s title is located.