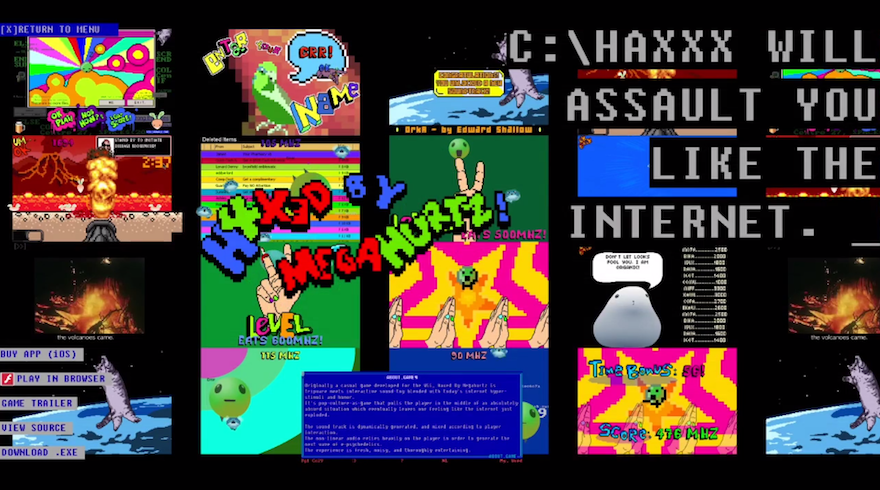 The IndieCade booth at E3 was a mess. Games like Hotline Miami 2 and the much anticipated Below were showcased well on large screens, drawing crowds of people in to watch as the new hotness played before their eyes. But Hotline Miami 2 was also playing on Sony’s massive marquee screen across the hall, and it had its own special camper in Devolver Digital’s space outside. Below was one of the showcase games of Microsoft’s conference last year, and it too occupied more than one space on this year’s floor.

These “bigger” games obscured many of the first timers in the IndieCade space, but it also made the sense of discovery greater. Laptops were quite literally edge-to-edge, situated on a massive circular table that perimetered an abstract pink sculpture. Walk for ten seconds past this portion of the booth and you’d easily pass five games, all waiting to be played, good or bad. You came over here for Below or Hotline, but stayed for the possibility of uncovering the next Fez.

Nathalie Lawhead’s Tetrageddon isn’t the next Fez, nor do I think she would want it to be that, but it was one of the only games to stick out in my mind after playing a few in this dense space. This was mostly due to the fact that what was going on on her screen looked like utter chaos, something I found refreshing in a land of adorable “tidy indie games” like Threes! or Monument Valley. Her opening monologue is quick to bring up Monty Python as a reference for her work—less Holy Grail, more Terry Gilliam’s iconic animation. But instead of bastardizing Victorian monarchs, Lawhead utilizes conventions of internet culture: cats, gifs, logos, spam, pixel art, etc. to set the tone of her games.

“You sort of understand what you’re seeing, but you don’t quite know what’s going on,” she says of her mini-game collection. “I keep aiming to make something that throws you in the middle of it and leaves you thinking ‘Oh god! I hope I’m doing this right. What’s happening!?’ So playing them, you’re not too sure if you’re doing this right, or what’s happening, but the whole experience starts to become entertaining in its own right.”

The absurdity of the games is total, and running through them you definitely get the sense that you’re browsing the old internet, the one before social media centralized and tidied it all up. When URLs were passed around at school or friends knew how to get there only if they “could please just use the computer for a second.” Sites like nata2.info, ebaumsworld, and homestarrunner, ones whose discovery felt both like an accomplishment and an indistinguishable terror, defined these times. The idea that you were the only one that knew about a site (despite how many kids told you about it) felt like you were directly peering into some unknown person’s psyche. It was a time when you could hear a friend say “You can get to crazy government sites if you type in lots of X’s with numbers in a URL, my brother did it once.” Though www.xx56xxxxx843.com and similar ilk never yielded results for me, the idea that this was even plausible is indicative of the time.

Nathalie recalls this as well: “I remember being there at the ‘early stages’ of the internet, when people used real grammar in chatrooms and spam wasn’t something to take measures against. […]I I also miss humor in games. Anybody from that era would understand what I’m referring to. Silly hidden easter eggs, cheat codes that unlocked ridiculous things, just do something for the sake of it being funny. Things are way too professional now. That’s why I try to load as much silly as possible into my games.”

Embodying a piece of spam as it tries to make its way to a users inbox, playing tic-tac-toe against a hamster at the gates of hell, defending the uploaded human existence on the internet from ne’re-do-wells… “etc.” doesn’t make sense as a continuation here because Nathalie plays by her own logic, itself an interpretation of “what digital realities exist in our head when we browse the internet.” The aforementioned silliness and absurdity is definitely off-putting at first, each screen a visual and aural assault of the highest degree, but you do start to understand this world as you spend more time with the games. It’s like breaking down a mental wall in your mind, the games themselves functioning as release valves for your digital subconcious. You don’t truly ever “get it,” nor do I think thats possible, but at a certain point, it feels distantly familiar—the connections Tetrageddon makes are ones that we may have made before but never realized. It’s visualizing the internet k-hole.

I ask Nathalie if she feels like the project is done, its net cast wide enough to encompass or embody  a general experience. Her answer is quick: “The project is far from done. I keep adding to it. It might appear as separate pieces, but I encourage players to view the project as a whole. Next I want to tie it together by turning the site into a 3D arcade. You would move around in the environment and play games there. The games you play, and how you play them, will have an influence on the environment.”

Tetrageddon, then, threatens to create its own virtual “space” inside the greater space of the internet. The possibilities from there spiral out even further, but Nathalie hopes she won’t be alone in the venture: all of her games are open source.

“I’m contributing, even if just slightly, to lowering the bar for new devs to get into game development by presenting something they can mess around with,” she says. “I fought with fear of being criticized for my coding or seeing someone take it and sell it under their own name making money from it when I don’t. These concerns are both materialistic and unrealistic considering how much more others could benefit from it being open.”

Her insistence here is passionate: despite the absurdity of her project she sees it more as a platform than something to ever be “done.” Theoretically the Tetrageddon arcade could encompass the complete range of digital/human interaction: A game for what it’s like browsing news sites, updating a profile, watching a YouTube video, and so on. The internet, as we know, is bottomless.