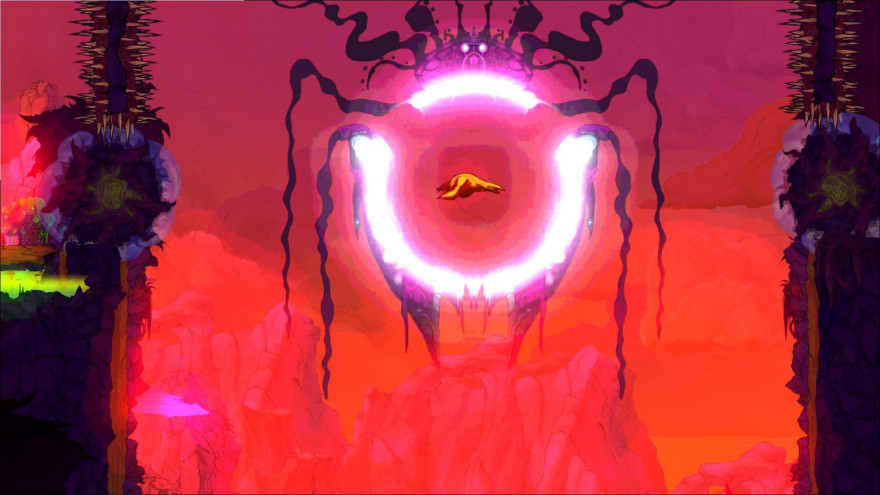 Stories of fighting amongst the gods go a long way back. Zeus became king of the gods by overthrowing his father Cronos, who became king of the titans when he usurped his father, Uranus. Osiris was murdered by his brother, Set, and his dismembered body was reassembled by his wife, Isis in order to father Horus who would overthrow Set in turn. The God of War games and the recent Apotheon add another iteration to the cycle by tasking a mortal with the destruction of the gods.

In this context, Aaru’s Awakening acts as something of a throwback, casting its eponymous hero as the agent of conflict between the gods rather than as a stand-in for a nascent post-mythological humanity. A four-legged demigod resembling a cross between a lizard and a dog, Aaru doesn’t particularly invite players to identify with him, which is all for the good. While Aaru’s Awakening drapes itself in the trappings of myth, and the contemporary trope of the noble hero engaged on an ill-informed quest, the game is much more an embodiment of the tenuousness and peril of existence under the gods.

The gods, after all, are to their lessers capricious, unreliable in their affection and implacable in their charges. Even death cannot be relied upon for release from their demands. So it is for the player in Aaru’s Awakening.

The game is much more an embodiment of the tenuousness and peril of existence under the gods.

As such, there is not a great deal of reward in discussing the aesthetics of the realms Aaru attempts to traverse. You are likely to see little of them. In the early stages, the limited musical score repeats without taking note of whether you happen to be playing a level or have exited to the menu. The visuals have been attentively crafted, but don’t seek or reward special attention. The only real concerns are movement and survival, both of which are difficult.

Aaru’s Awakening distinguishes itself as a platformer through the inclusion of a teleportation mechanic, which superficially resembles the running levels of Velocity 2X, but plays in an entirely different fashion. Rather than toggling between running and teleportation using a single analog stick, Aaru’s Awakening separates the controls. With a keyboard and mouse, this means that the player moves Aaru with a standard WASD system, and uses the mouse to direct and throw orbs to locations where Aaru can teleport.

In effect, this means that the player has to be concerned at all times not just with where Aaru is, but where the cursor is in relation to Aaru. The player may need to position the cursor to the right of Aaru in order to execute a charge and break through an obstacle, but then move the cursor above Aaru in order to throw a teleportation orb onto the next ledge before Aaru falls to his death. (If this is a difficult maneuver to envision, it’s not much more intuitive in play.)

In a two-dimensional space, this makes Aaru less of a singular object than one of the two floating vertices of an ever-changing ellipse, stretching and tumbling more than running and jumping.

The game points to speed, offering bronze, silver, and gold medals for completing levels within certain time limits, but speed was never accessible to me. I moved from one checkpoint to another, trying to plan my next move. Frequently, this meant trying to stay alive long enough to be able to see the next checkpoint before dying, much less figuring out how to actually get there. Accomplishing speed, thus, is more a matter of memorizing the world instead of reading and reacting to it. You die, and if you die well, you learn one more twitch necessary to die slightly later.

But learning the twitch is not the same as executing it successfully.

All of this will likely be tremendously appealing to a particular sort of player, and Aaru’s Awakening clearly deserves a certain recognition for putting its own twist on the unforgiving 2D platformer. But if you are going to enter this world, know that the extrinsic rewards are few. The challenge is really all there is. The gods give only what they will, and are unconcerned with whether mortals find it sufficient.