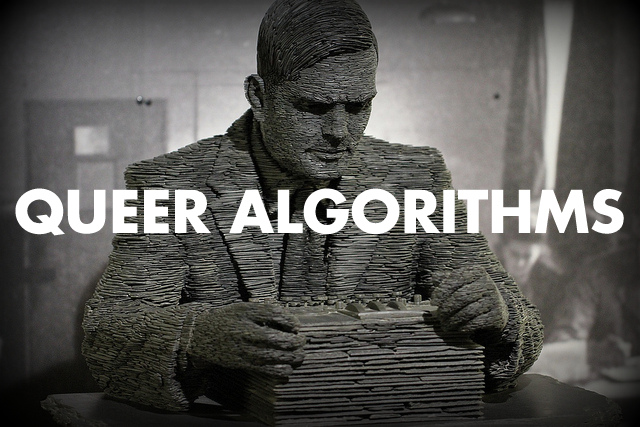 We stand at the edge of a precipice: Six decades after Alan Turing’s suicide, we’ve found ourselves with access to the entire breadth of human knowledge, available anywhere, anytime, instantaneously. The light of progress burns ever-bright in the human breast, where hope also springs eternal; Turing’s formalization of the basic concepts of computer science—algorithms, his eponymous test, the idea of computation itself—have helped us get here.

Technological advances have far outstripped social ones, and, if Turing were alive today, I’m sure he’d be ecstatic at our computing prowess. As a gay man, though, I don’t think he’d be quite so thrilled.

“…There are few serious treatments of Turing as a queer figure, perhaps due to the difficulty in applying anachronistic language to historical figures such as Turing,” writes Jacob Gaboury, an editorial fellow-cum-staff writer at Rhizome in the first part of his excellent analysis of the queer history of computing.

In his article, Gaboury emphasizes the inseparability of one’s sexuality from one’s work; as a consequence, he suggests, we can and should reinterpret computing history through the lens of queerness.

Where, then, does that leave video games? After all, they’re fundamentally 0s and 1s—like it or not, they’re a part of that same history.

Many game designers shy away from the questions that inevitably follow from abandoning heteronormative conventions: of those that don’t, some create bold, daring, and exciting forays into unexplored psychic territory; others, on the other hand, mishandle the issue completely.

After two epics, the team behind Mass Effect finally decided to give players the option to choose their sexuality. We’ve written about this before.  It does, however, bear mentioning again—“fucking in the face of the galaxy’s end is the clearest way to see what’s at stake for people in the real world today.” After Mass Effect 3 was released, though, BioWare apparently invoked the policy of “separate but equal” and offered players a gay planet DLC in Star Wars: The Old Republic. (Which was then spoofed brilliantly by Anna Anthropy’s text-based game The Hunt For The Gay Planet.) It wasn’t a great decision, to say the least.

There’s certainly a long way to go before we’re able to work this whole thing out. We can’t break a concept as complicated as sexuality into simple bits and bytes—Turing’s example shows that we shouldn’t. And maybe that’s his last and most important algorithm, his final gift to us.