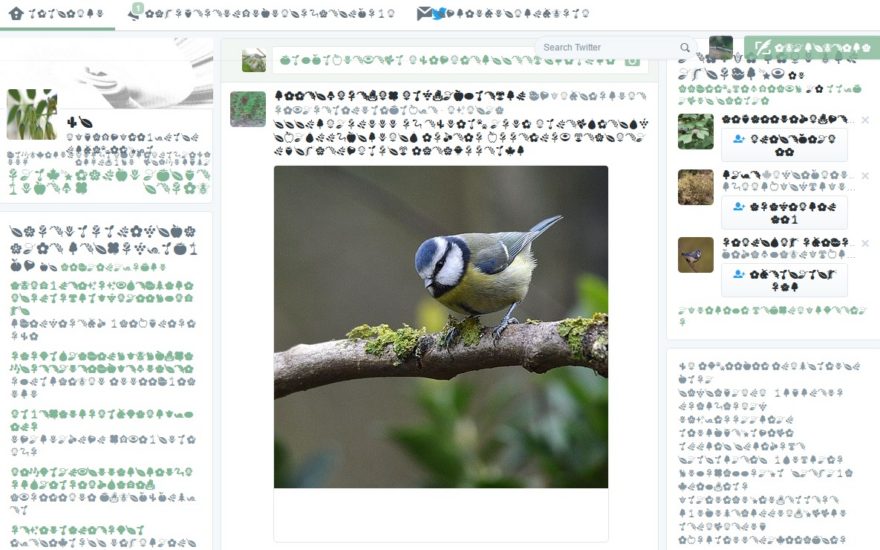 The Internet is, by and large, an ugly place. This is a reality partially informed by the choices we each make (some more than others, granted) but largely attributable to choices made upstream, before websites arrive on our screens. To beautify the Internet, then, is to wrest control away from the powers that be.

Pol Clarissou’s The Quiet Gardens of the Internet lets you turn every website into your happy place. The Google Chrome extension places a flower button in your navigation bar that you can click when in need of relief. Shortly thereafter, by the magic of Unicode, it replaces all the text on your screen with floral emojis. The effect alternates between serene and cacophonous; the flowers are calmer than digital invective but the effect is still quite busy. Even Liberty of London would find this to be an extreme floral pattern. But calm on the Internet is relative and hard to come by, so The Quiet Gardens of the Internet does exactly what it promises.

vandalism is a way of (re)asserting control over contested space

A similar extension is Addendum—a collection of visual essays created by the arts non-profit Kadist, which turns the sort of private statement Clarissou’s extension offers into a form of political discourse. Addendum replaces ads on websites with curated photo-essays from contributing artists. In a narrow sense, Addendum is a political statement akin to using an ad-blocker: both interrupt the economic flows of websites and, in theory, push for changes to their underlying business models. Addendum, of course, adds the beautifying quality of The Quiet Gardens of the Internet to the traditional ad-blocker model. It reallocates space instead of simply erasing it.

Very little good ever comes from comparing the Internet to physical space—it is famously not a set of tubes—but that is the salient comparison when thinking about the politics of these extensions. Much as graffiti and murals exist on a spectrum of uses of public space, so too do extensions. They are ways of reclaiming digital real estate for the needs of locals. Ads and content, after all, are served upstream—assembled on a server before being sent to your computer. Extensions, however, represent decisions made on the end user’s system. Here, as in the physical world, vandalism is a way of (re)asserting control over contested space. This perspective does not solve all the moral questions about ad-blocking or how the Internet should work, but it gives us a bit more language to rely on when discussing digital spaces. The urban sphere, where the contested politics of space and its competing uses has a longer history, can help in navigating digital spaces.

You can get hold of The Quiet Gardens of the Internet on itch.io. Addendum is available through its website.