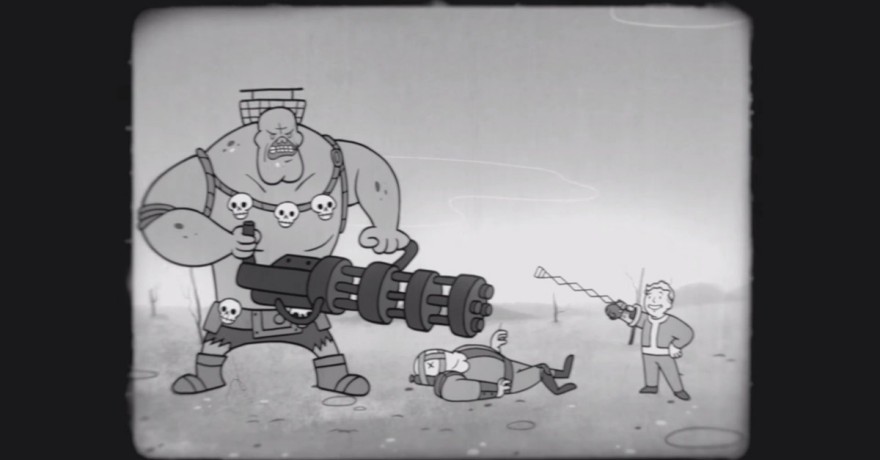 If you’ve played last year’s Fallout 4, you’ve doubtless seen the series of animated shorts that play upon starting the game up. Black-and-white and with scratchy audio, these videos turned the post-apocalyptic Boston wasteland of Fallout 4 into a comedic, 1950s-style cartoon. (If you haven’t seen these shorts, then you can easily catch up on them all over on developer and publisher Bethesda’s YouTube channel.)

Each of these shorts detailed one of the letters in the game’s  “S.P.E.C.I.A.L.” system. This has been a staple of the Fallout series since its first outing in 1997. It’s an acronym that stands for Strength, Perception, Endurance, Charisma, Intelligence, Agility, and Luck. It’s these that you advance through the leveling system and that dictate your character’s effectiveness in different situations, whether that is combat, exploration, or conversation.

When creating the cartoon series, the small Australian animation studio Rubber House had its work cut out: not only did the team have to communicate the individual elements of each letter in the S.P.E.C.I.A.L. ruleset, they also had to do so while adhering to the animation practices of the 1950s. This was the outline given by commissioning agency AKQA, who was working on Bethesda’s behalf.

Why the 1950s? It’s in keeping with the cheesy, anachronistic, and inappropriately cheerful (this is the post-apocalypse) adverts, manuals, and products of Vault-Tec, the omnipresent corporation that exists within the Fallout universe. (The corporation’s existence perhaps being a commentary on the persistence of capitalist practices no matter the state of the world.) While Vault-Tec is never really seen as an entity inside of the game except in the products that lie as debris around the wastelands, it isn’t faceless. Vault Boy, the company’s all-smiling, all-winking mascot is a typical 1950s model of the ideal man, complete with golden curls. Naturally, he is the star of Fallout 4‘s animated shorts, parodying the government-made training films meant to prepare citizens for the potential disasters of nuclear war—the most famous of which being 1951’s “Duck and Cover.”

Perhaps you think Rubber House’s task simple. Surely all you need to create shorts that have a 1950s feel to them is to degrade the sound and turn down the colors. But as the studio outlined to Motionographer in a recent interview, there’s much more to it than that, at least, if you plan on going the whole hog. “When we were designing it were insistent on getting the period right,” said Rubber House co-founder Ivan Dixon. “This wasn’t 30’s or 20’s floppy rubber hose style; it had to feel like late mid to late 1950’s, which is less spheres and sausages and more angular/designed.”

The studio researched the 1950s style of animation by watching plenty of The Flintstones and, when drawing up their own designs, always asking “Could they have done this? Would they have done this?” In other words, the studio made painstakingly sure to adhere to the vintage practices under which animation of the 1950s was produced. “This means setting up parameters such as, for instance, the maximum number of planes that can be used in a parallax or avoiding storytelling tropes that wouldn’t have existed back then,” said the other Rubber House co-founder, Greg Sharp. “We even went as far as making the editing slightly erratic as sometimes happens with analogue equipment.”

at least one violent Vault Boy death per episode.

Crucial to achieving the effect was the audio. And for this, Rubber House teamed up with previous collaborator and sound designer James Brown. He followed the same restrictions on audio as Rubber House had done with the visuals, following advice given by Looney Tunes director Chuck Jones, who said to never mix music and sound FX. “However, these weren’t fully-fledged cinematic shorts, so our aim was to simulate the score that a 1950’s Public Service Announcement produced on a middling budget could afford,” adds Sharp.

Outside of these necessary limitations, where Rubber House clearly had some fun was in introducing another rule for each of the seven shorts: there had to be at least one violent Vault Boy death per episode. It’s a bit of a throwback to a time when cartoons could be a little more violent and get away with it, slapstick having pervaded early 20th century animation. Though, not many (if any) quite achieved the gore levels in the visual gags of the S.P.E.C.I.A.L. animations.

You can read the full interview with Rubber House over on Motionographer.