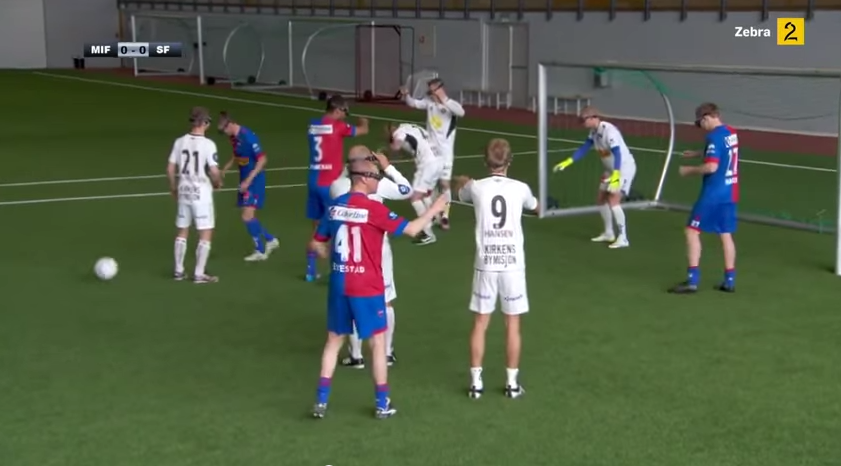 Soccer is a popular sport—by some measures, the World Cup is the most watched sporting event in the world. Soccer videogames, particularly the FIFA franchise, are also quite popular. In all likelihood, the Venn diagram for fans of the sport and fans of the videogame resembles a circle more closely than two tomatoes on a vine. One might therefore assume that the gameplay of soccer and its related videogames could be merged into one super-game to rule them all: NKOTBSB, but for soccer.

Golden Goal, Norway’s mischievous sports talkshow, put this hypothesis to the test, and the results weren’t pretty. The show’s latest experiment involves two sides—each with five outfield players and a goalkeeper—that play on an indoor pitch while wearing VR headsets that relay the view of the pitch from overhead. The big problem with this new form of soccer is that none of the players can find the ball. They purposely wander to and fro but it’s all for naught. Occasionally, a goal trickles in. Nobody is quite sure what is going on. As if they were trapped in a suddenly dark room, the players feel around with their hands.

A marvel of prankster game design.

This is not Golden Goal’s first marvel of prankster game design. The show’s hosts have previously roped referees and former pros into matches played on steep slopes and while wearing plastic bubbles. The show’s greatest achievement, however, will always be the time they hooked players up to electric dog collar that could be triggered by the opposing team’s coach. Golden Goal uses game design as an agent of chaos.

There is, however, a serious point to be made here: Broadcasts and videogames have different visual languages than the sports they purport to reproduce, and for cause. Audiences at home benefit from a holistic view of the spectacle. Players, on the other hand, require a more opinionated point of view. The ability to see everything, which is often fetishized, can actually be a disadvantage if it comes at the expense of some sense of perspective. This phenomenon isn’t limited to soccer; American football is usually filmed from the side of the field, an angle that would be as disorienting as Golden Goal’s overhead camera. Games and broadcasts, even if they exist to convey athletic events, reframe them in ways that are easily comprehensible when sitting on your couch.