“Most videogames are natural time loops. When you die, you restart and play the exact same level, but the character you control isn’t aware of it,” explains Luis Antonio, creator of the experimental top-down point-and-click Twelve Minutes. Rather than disregarding the implications of these inescapable loops, which is arguably one of videogames’ most distinctive features, Luis decided to instead make a game that revels in just how bizarre the concept is.

Though still in the early prototype phase, Twelve Minutes is already an impressively evocative experience. It begins with your player character arriving in his apartment after a day at work, only to have dinner with his wife. Just like any other day—until five minutes in when a cop barges in to accuse her of killing her father and violently interrogates you both. As you pass out from a blow to the head, a screech of white noise blares before you are returned to the exact moment when you walked through the front door. Again and again and again. Everything is exactly the same each time. Except, of course, for the the fact that you know your wife might be a murderer. Oh, and that time and space seems to have broken around the perimeter of your apartment.

What really sets Twelve Minutes apart from other game worlds is that “nothing changes but you. Everything resets at the end of the loop, but you as a player have the knowledge of what will happen, and you can clearly see how that knowledge opens more and more possibilities.” Your wife, for example, welcomes you home every loop, completely unaware. You could try proving to her that the day keeps resetting every twelve minutes, but when time’s up, she won’t remember even if you did manage to convince her.

The only agent of change in each loop is you, the player. Even the main character is relegated to only reacting to the player’s will, which I learned after he protested when I commanded him to stab his own wife (before eventually obliging). Controls are kept purposefully minimal and transparent, the game’s space and time loop purposefully small, in order to create clear consequences for every action the player enacts.

Those actions not only affect the enivornment, but also the set paths and agendas of the other characters. Maybe you take all the utensils and dishes away so your wife can’t ever set the table—or maybe you eat without her just to tick her off. Perhaps you want to play the “good husband” in one loop, so you set the table yourself (before subsequently lacing all your wife’s food with sleeping pills so that she passes out before the cop arrives).

It’s an isolating experience, being the sole arbiter of change.

“Every object has a purpose and its something the player can understand and use easily,” Luis says. The concision of the time loop, combined with the clarity of causality, generates a focused atmosphere so that every time the loop restarts, “players are able to define their own objectives. The game never tells you what to do, but players naturally define goals based on how they interpret the current situation. What they believe is the ‘right thing to do’ or the direction they decide to take are what will allow them to complete the game.”

It’s an isolating experience, being the sole arbiter of change. Inspired in part by Luis’s memories of playing Another World on the Atari, where “the loneliness and lack of any explanation let the environment and characters aggressively show you what to do.” Though he says creating a world that reacts to player-generated objectives wasn’t too difficult, he found that ” the real challenge was to make sure that you always got a clear feedback of your actions and decisions and how they change the surroundings.” So, he decided to make “all the design choices convey the message: the top down view, the fact that you don’t control your character one to one but rather ‘tell him’ what to do by clicking in the environment.”

Luis decided to remain vague about the real-world takeaways from Twelve Minutes so players could eventually discover them for themselves. But the prototype already successfully communicates the odd predicament of an omnipotent being who also has very limited power. Hindsight is twenty/twenty for everyone, but constantly reliving an experience of helplessness, no matter how many times you think of ways you might’ve done things differently, feels like more of a nightmare than an advantage. 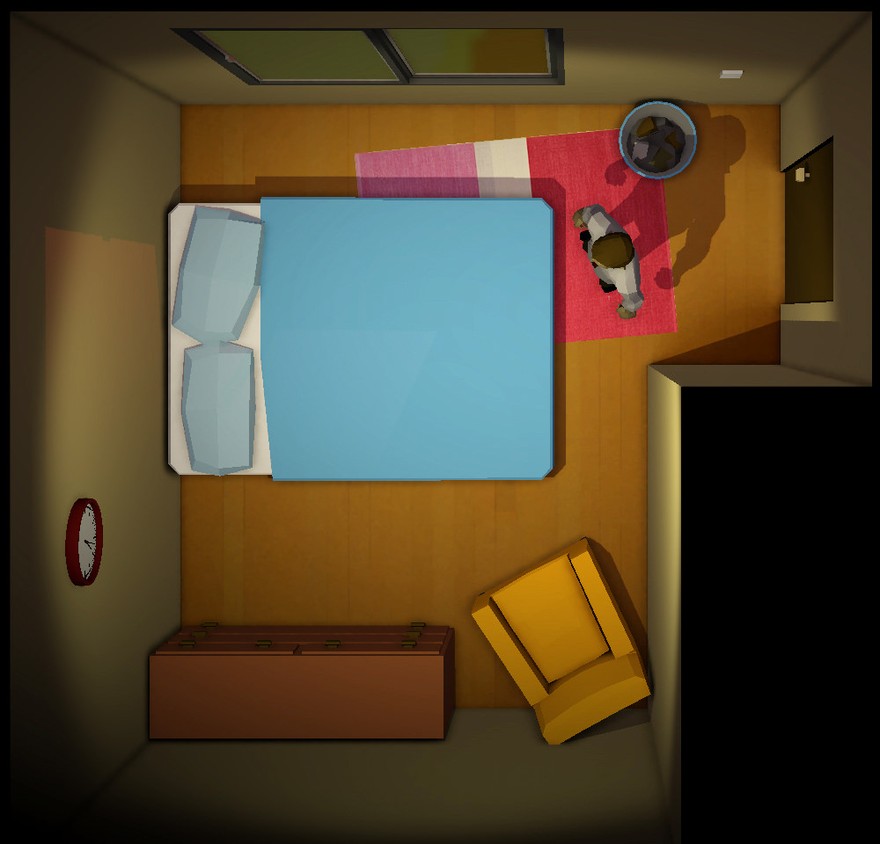 As a prototype, the art and dialogue in Twelve Minutes serve only as placeholders for delivering the bare skeleton of Luis’s vision. Eventually, he’ll be “aiming for something that feels raw and realistic like Primer but has the intimacy of something like Eyes Wide Shut, since you are peering into the life of a couple.” He also found stylistic inspiration from Kubrick’s version of The Shining, which also works well with the games murder-mystery undertone. Luis envisions an environment that not only responds to player action, but also subtly expresses the protagonist’s emotions, like perhaps making the walls in the apartment a shade redder with each successive loop. Each addition to the apartment will “make you feel that you are entering someone else’s intimacy, where you can read their lives and personality through the objects and layout of the apartment.”

Because Luis is currently a full-time employee for Jonathan Blow’s The Witness, he’s only able to work on Twelve Minutes in his spare time. However, he does hope to eventually put together a small team and get the game out by Christmas next year. You can keep up to date with his progress through the devlog.