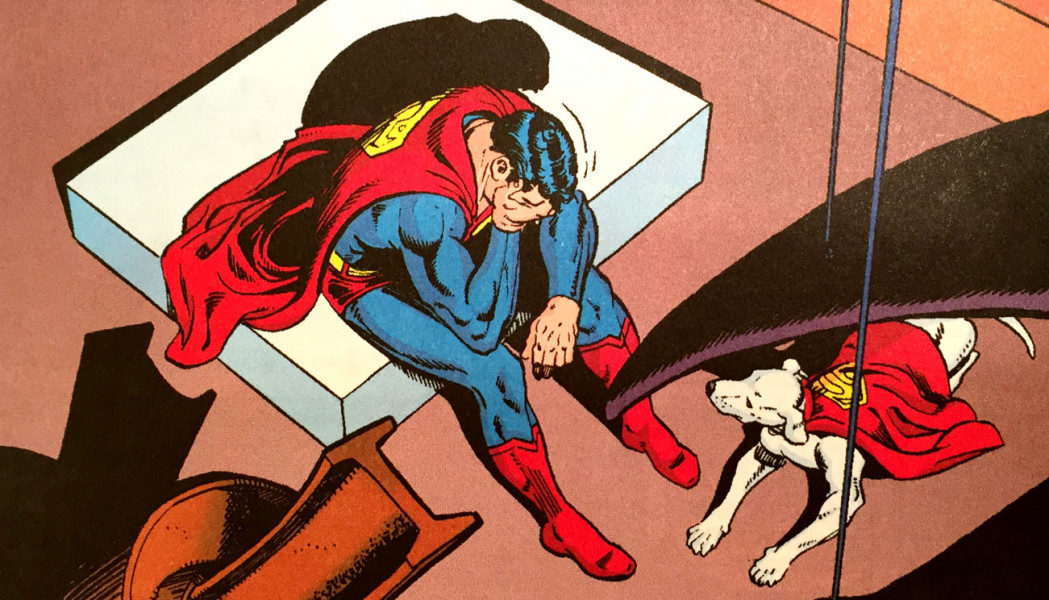 In his review of X-Men (2000), Roger Ebert begins with an evocation of the mythological gods of Ancient Greece, and ends with a plea to die hard comic book fans, whom he wishes would “linger in the lobby after each screening to answer questions.” Sixteen years later, viewed from a cinematic present overrun by the cape and cowl, Ebert’s words read as both prescient and portentous. The rise of the superhero blockbuster, beginning in earnest with the release of Spider-Man, in 2002, is comparably bifold, driven by two dissimilar but potent cultural forces: a civilization’s ancient, collective need for a self-defining myth, and the thoroughly modern drive to commodify that desire. Superheroes have become the contemporary American equivalent of Greek gods, mythic characters who embody the populace’s loftiest hopes, its deepest insecurities and flaws. Between 2016 and 2020, an estimated 63 comic book adaptations will receive a major theatrical release, with scores more scheduled to take the form of TV shows, videogames, and every saleable medium in-between. The public’s appetite for these properties appears blind and bottomless, its stomach willing to rupture long before it’s sated. If American culture is indeed in a state of decline, these are the stories built to survive its demise.

Superheroes have become the contemporary American equivalent of Greek gods

And yet, as of late, movie superheroes have seemed less inclined to heroics. Consider, for example, the upcoming Batman vs. Superman: Dawn of Justice, a horizontal consolidation of superhero properties set to premiere this March. Based on the film’s five trailers, director Zack Synder has recast Superman (Henry Cavill), that paragon of American exceptionalism, as a kind of inadvertent terrorist, a questionable savior for whom destruction is a prerequisite for rescue. Enter an aged Batman (Ben Affleck), never broodier, to serve as humanity’s last line of defense, his Batsuit more SWAT vehicle than Kevlar. And who’s supposed to be fighting crime while the superheroes fight each other? It doesn’t matter, because, as the trailers make unabashedly clear, the heroes will join forces well before one pummels the other into submission. Once again, the fate of humanity rests in the hands of a superhuman few. But unlike previous iterations in both franchises, Batman and Superman have bigger concerns than saving the world—punching each other to no end.

A similar fate has befallen Marvel’s The Avengers, who also find themselves thrust into an arbitrary civil war in the aptly titled Captain America: Civil War. Scheduled for release less than two months after Batman vs. Superman, the movies recall a misbegotten arms race, with each vying to package in as much unwanted internecine warfare as possible. There is, too, a trend in both films toward a darker handling of the subject matter. The Batman franchise, already dimmed considerably by Christopher Nolan, now looks filmed through a filter of soot. The playful banter of the Avengers has been subbed for the slap-fighting words of jilted teens. (“…he’s my friend,” Captain America says to Iron Man. His response: “So was I.”) The animating energy of both enterprises recalls the worst of internet fan fiction, or children grown bored with their action figures. To illustrate, compare Tobey Maguire’s pie-wholesome Peter Parker to the murderous, cuss-spewing Deadpool. Our superheroes have lost all interest in being heroic. In the name of brand consistency, they’ve lived long enough to resemble villains.

This progression has a complicated explication but a simple trajectory, wherein the blue skies of Sam Raimi’s Spider-Man trilogy darken gradually into the eternal night of this year’s Suicide Squad. In that film, the villains of the DC universe have been convinced, albeit temporarily, to moonlight as heroes for the day, acting as short-term contract laborers for justice—super villains do, after all, lay equal claim to the prefix. Whereas other hybridized superhero stories, like the pseudo heist film Ant Man (2015), or the gritty noir Jessica Jones (2015), have contrived to settle their protagonists into an ethical grey area, Suicide Squad eliminates all pretense and contrivance. Its grey area is more tar pit. And its arrival represents the uncovering of the harsh truth at the core of the superhero mythos.

For 15 years, the superhero blockbuster has allowed American audiences to project an illusory dual image of its character, a fiction in which it’s at once helpless victim and benevolent savior, the damsel in distress and the hero coming to her aid. Where Batman vs. Superman and Captain America: Civil War strive and likely fail, Suicide Squad presents a much more honest, holistic image of America as superpower in the 21st century. It’s the conclusion to an argument whose articulation has been a decade and a half in the making. We’re neither the victims nor the heroes, it suggests. The resemblance isn’t passing. We simply are the villains.

We’re neither the victims nor the heroes. We are simply the villains.

In spite of Roger Ebert’s tepid review, X-Men went on to earn a global box office of nearly $300 million, approximately four times its production cost. The movie was, for its era, a mammoth success, a green light for studios to reconsider the viability of superheroes as intellectual property. Along with reboots of the Batman and Superman franchises, Spider-Man was a direct result of this renewed interest, and its then record-setting performance—$114 million in its first week, $871 million global box office—was a bellwether in cinema. The sub-genre of the comic book movie consumed the mainstream, in turn becoming the mainstream. Christopher Nolan’s The Dark Knight (2008) received eight Academy Award nominations. The Avengers movies ultimately became two of the ten highest grossing films in history. Even non-comic book franchises, like The Fast & The Furious began to imbue their otherwise normal characters with superhuman powers. There are 16 annual Comic Cons in the United States alone. For the characters on the screen as well as for the people in the seats, being a superhero has become the norm.

The explanation for this preponderant interest in superhero stories could be traced, potentially, to that transitional period in American history, bridging the summers of 2000 and 2002, when a new found enthusiasm in comic book stories arose in the American movie goer. What may account for this increase, as it does for so many of America’s ongoing syndromes, is the advent of the age of terror, and the stories that audiences needed to hear in its wake. These were, of course, tales of impossible heroism in the face of evil, a commitment to ultimate justice at all costs. The superpower had been rendered momentarily vulnerable, and its media may have adapted to capitalize on that vulnerability. Observe how willingly films like Man of Steel (2013) co-opt the iconography of destruction, or how, in The Dark Knight, Heath Ledger’s The Joker threatens the societal order with terroristic chaos. The tone and tenor of superhero blockbusters have long paralleled the public’s view of American interventionism abroad, following the oblivious self-assuredness of the past into the darker, more complicated self-reflection of the present. 9/11 may have been the reboot of the American character. If so, every year since has been a rehash of an old origin story. 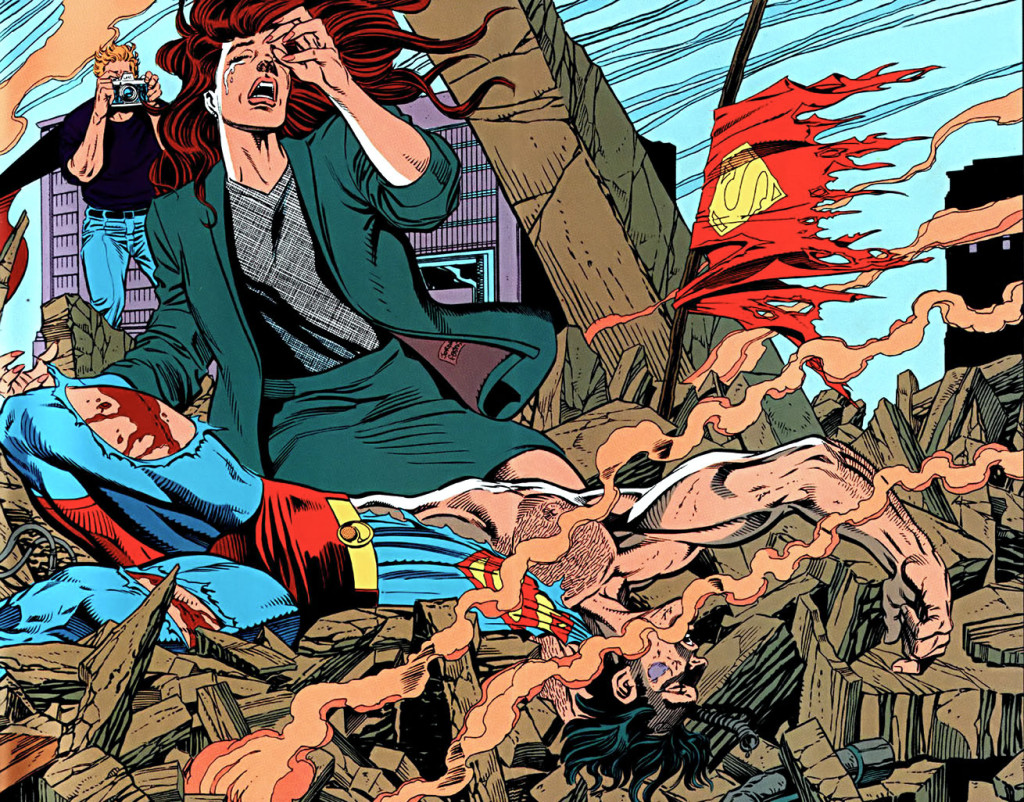 That our superheroes have become contemptuous and combative shouldn’t surprise: the theater’s screen has always doubled as a mirror. In Spider-Man, the rose-colored surety of Peter Parker’s character was a true reflection of the American public’s. Today, those sentiments appear from one angle alluringly innocent, from another profoundly delusional, but therein lies their tensive power, the unsentimental truth they convey about the human compulsion to escape normalcy, no matter the cost. Our superheroes have shrunk down to the size of an ant, grown to stand head and shoulders over skyscrapers—it feels like progress that the only path these myths have left to stride is the one toward reality. May we arrive there sooner than later. For nowhere are fantasies of heroism more cherished than in the land of villains.

Featured image via “Superman: Whatever Happened to the Man of Tomorrow?” Superman Vol 1 #423, via Multiversity Comics