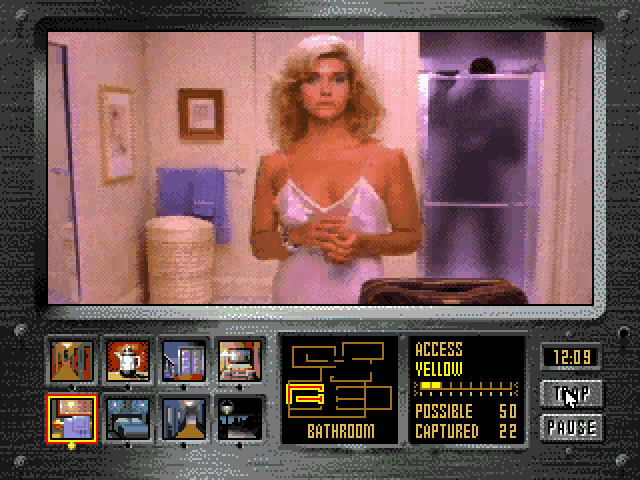 Most people look back at FMV games and remember a dark period in videogame history. The early 1990s saw the introduction of CD-ROM and laserdisc-printed games. Suddenly, given more than 10 times the storage capacity of cartridges, developers wanted to shoehorn in interactive video wherever they could.

While the intent was to further blur the line between videogames and cinema, what actually resulted was a combination of janky mechanics paired with bad acting and crunchy video. It was, in short, bad, but inimitably so. Titles legendary such as Star Trek: Borg and Night Trap didn’t perform well initially, but they have grown in stature over time due to their unintentional comedic value.

With the Xbox One launch title Lococycle, developers Twisted Pixel proudly resurrected the full-motion video cutscene in all its janky glory. In fact, they’ve included FMVs in nearly all of their games, but executive producer Bill Muehl says that Lococycle was the most complex production they’d ever done.

“We made a 40-minute film in addition to the whole LocoCycle game,” Muehl said. “The scenes were fun to produce, but they’re also a ton of work.”

The Twisted Pixel crew came across all sorts of pre-production challenges: casting actors, having bike builders construct real-life renditions of the game’s starring motorcycles, putting together a film crew, and locking down filming locations, not to mention finding over one hundred biker extras for a biker rally scene.

“There was also the challenge of getting three wolves to perform on cue, which sounds good on paper but gets complicated when you factor in a 90-plus degree Texas day in April.”

Why go through all the trouble? As Muehl explained it, FMVs let Twisted Pixel “try something different in both production style and comedy. Both can be risky approaches, especially when combined.”

The first time the developer took a crack at injecting some real-life comedy into a game was in ‘Splosion Man, when they slipped in an absurd music video. While ‘Spolosion Man was released in 2009, Twisted Pixel wrote a song that recaptured the 80s rock music vibe. The video itself, meanwhile, looked similar to the grainy video quality and low budget special effects of an FMV segment.

“The ending of that game was along the same lines of stretching an extremely small amount of money and embracing a campy production style,” Muehl explained. “A few of us made super low budget film productions in the past, mostly because we just loved the process and it’s a different type of challenge from game development.”

When it came time to make the sequel, they chose to recreate the moment.

“The fact that it didn’t take itself seriously added to the irreverent style of the game as a whole.”

“The fact that it didn’t take itself seriously added to the irreverent style of the game as a whole,” Muehl said. “The FMV in Ms. ‘Splosion Man was a continuation of the style from the first game and Comic Jumper broke the fourth wall quite a bit, so mixing real actors with the game characters played into that concept.”

Comic Jumper revolved around Captain Smiley, a comic character quickly losing his popularity and, accordingly, the attention of his reader, who was played by a real-life boy. As the game progressed, it would often jump out of frame to see the reader’s reaction. FMV games, drunk on the power of Real Actors, would often have game characters portrayed by real-life actors that often addressed the player directly. They grew notorious for having bespoke kill screens in which the villain or your allies would hang their head in shame at your ineptitude.

Twisted Pixel finally fully dove down the FMV rabbit-hole with The Wavy Tube Man Chronicles DLC for The Gunstringer, which Muehl described as being designed from the start as an old-school FMV style game.

“The stuff Tom Zito and the guys at Digital Pictures did on Night Trap and their other live action games in the 1990s was new and experimental and I loved seeing what they would try with the new CD-ROM format back in the day,” Muehl said. “Even though the gameplay wasn’t deep, they were mashing up games and films in ways that hadn’t been done before.”

Adding videogame elements to sequences of video seemed to actualize the deeply ’90s dream of playing an interactive movie. But many game developers believed they could make better games by using human actors. In the original Mortal Kombat, Midway Games used real-life fighters to do motion capture and digitize fighter models all in one shot, without having to create polygonal models. Unfortunately, when these techniques were used for dramatic purposes, the productions ended up employing “B-movie” actors paired with low budget lighting, sets, costumes, and special effects.

FMV games for the most part became synonymous with schlock movies—so bad they’re good, in other words. The industry as a whole has moved on from using real-life footage, besides a few series like Command & Conquer for comedic effect and Alan Wake’s Mr. Scratch character. While FMV might not exist as it once did, it has evolved into cutscenes and interactive scenes such as the quicktime events in Shenmue or the more recent Beyond: Two Souls.

Although Muehl has a reverence for the experimental air of the classic FMV games, he also concedes that most of them are actually bad games. He doesn’t think their bad reputation is undeserved, in other words.

“Plenty of people without that context hate the game, but that’s kind of the point”

“That said, for people who have never played Mad Dog McCree or similar FMV games from that era, a game like The Wavy Tube Man Chronicles is probably just bizarre as hell,” Muehl said. “I’m sure plenty of people without that context hate the game, but that’s kind of the point since FMV games in the 1990s generated the same polarizing reactions.”

Muehl also does not want Twisted Pixel to be pigeonholed as the studio that does FMV. While it might introduce bits of film into its games, most of the team’s game influences come mostly from non-FMV experiences.

“We’ve embraced the perception of FMV, whether interactive like The Wavy Tube Man Chronicles or in cutscenes like LocoCycle, and that’s baked into our approach,” Muehl explained. “If FMV fits the theme, we’ll include it but we don’t want to force it just for the sake of including live action in a game.”

Will there be an FMV renaissance in the coming generation? Muehl doesn’t see one coming. But if the FMV genre can be expanded to mean any live-action video that a person interacts with, he’s sure there’s going to be plenty more to come.

“We’ve seen Microsoft take steps in that direction with the interactive Sesame Street and National Geographic titles for Xbox 360 with Kinect,” he said. “The more advanced hardware in the Xbox One and new Kinect will likely open up more options in the genre, and if consumers like it, they’ll buy it, and developers will make more.”