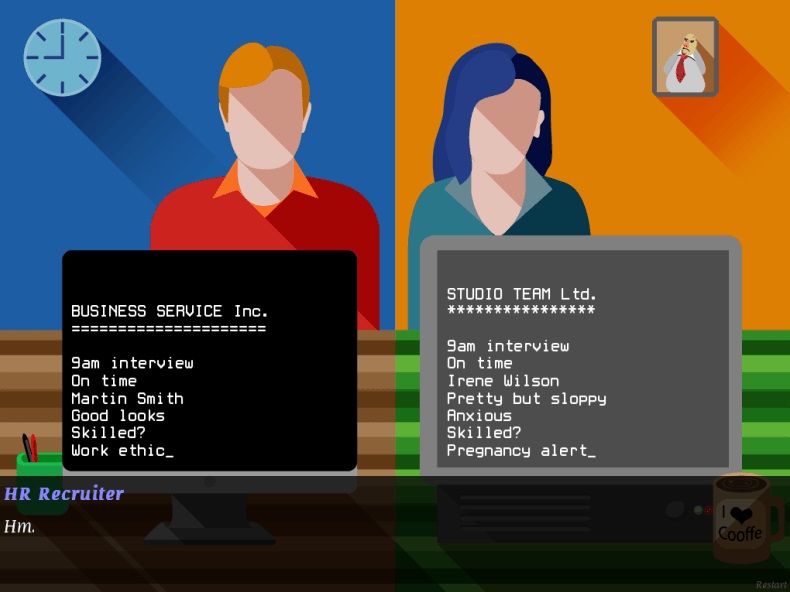 Two interviewees, both alike in aptitude, both attendant on the Internet where we lay our scene. One’s a man; the other’s a woman. You know how this goes.

Two Interviewees, a narrative game created by Mauro Vanetti, does not flip the script. That’s the point, really. Equality would be a shocking narrative turn. Fairness would be truly revolutionary. Equality and fairness are not to be found here. What can be found is a split-screen: a male candidate is on the left and a female candidate is on the right. They have identical CVs. You watch over the shoulder of an HR rep as identical backgrounds and answers lead to radically different outcomes.

In terms of its visual conceit, Two Interviewees is brutally effective. The interviewer’s notes are displayed on computer screens. The items from each interview are vertically aligned, allowing for a quick comparison. Think of it like a balance sheet, with credits to one side and debits to the other. Think of it like a balance sheet, because one of these interviewees will likely bring home far more over the course of his career than the other.

There are limits to what can be conveyed in a two-minute game. Two Interviewees largely passes over the subtleties of the coded language and expectations that result in hiring inequity. It takes very little to set off the game’s “she wants a baby”-alarm bells, which services a larger point, but the game has no space to explore how this process works. But who really cares about subtlety? Study after study has found that equivalent candidates do not experience identical outcomes; Two Interviewees makes its point effectively and gets off stage without overstaying its welcome.