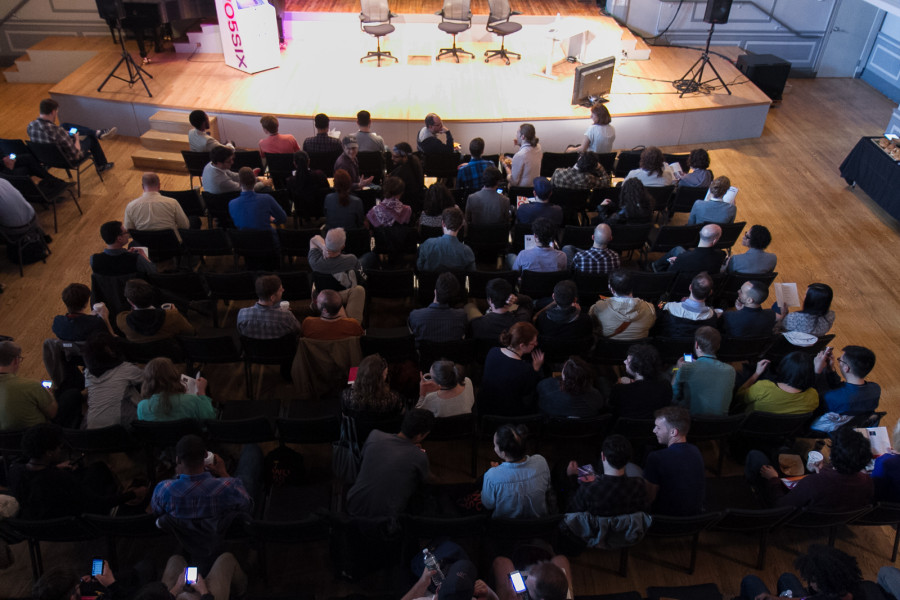 All images via David Evan McDowell for WJS Creative.

House of Knowledge, Inc. is a distributor of Islamic, African and Moroccan arts, clothing, and books. They also offer translation services, or will tailor your suit. The Brooklyn-based company, housed in a building that doubles as a retail store selling body oils, incense, and audio tapes, sits across the street from the Roulette Intermedium, where Kill Screen’s second annual Two5six conference took place for eight hours last Friday. If someone had asked me for directions to the “house of knowledge,” I would have directed them to this old theatre with its raised stage hosting three chairs. You wouldn’t have found Vanilla-Ginger aromatherapy. But plenty of wounds were healed.

The day comprised ten sessions, each bringing together an industry leader from within the gaming community alongside someone in a related field. Jamin Warren, co-founder of Kill Screen and former Wall Street Journal reporter, curated the discussion, asking questions and cycling through images projected onto a giant screen. According to the program, Twofivesix was meant to be “a celebration of what games can teach culture and culture can teach games.” In the simplest terms, it was people on a stage talking. The format reminded those in attendance of the power such basic interactivity holds. This was a day of connections forged and walls breaking down. There were also donuts.

And dwarves. At 12:24pm, Tarn and Zach Adams, the brothers behind Dwarf Fortress, describe a screen of triangles, circles and punctuation marks as a fantasy kingdom with predictable weather patterns inhabited by goblins. The session is subtitled, “Building a world that never ends.” And indeed, they say the sprawling randomly generated simulation, now in its thirteenth year, is only 38% complete. All unused code and programming notes will be donated to the Museum of Modern Art in New York, where the game resides as part of its permanent collection.

“We will not survive for Version 2,” one of the brothers says. From my vantage it isn’t clear which one, though. I google “Zach Adams” and find that he has been charged with the kidnapping and murder of a nursing student named Holly Bobo. This is not the right Zach Adams. I add “Dwarf Fortress” to the search box and, sure enough, pictures of the Adams brothers appear. Each image includes Tarn and Zach in the frame, standing or sitting next to one another. Even the Two5six program lists their names as a single entity: “Tarn + Zach Adams,” it states, as if melted down and recombined into some molecular wonder. They will go on making this game, together, and together their world will never end.

Inside the room, attendants and their attentions are more discrete. A gentleman in front of me gazes at his laptop, open to a forum post with the subject heading “Project Smashed at Noisebridge.” Another, resembling a young Freddie Mercury, draws out a storyboard of the day, each session relegated to a still-shot sketched in broad magic marker. On the periphery of the room, workers in white shirts and dark aprons place donuts the size of small tires into paper bowls.

An all-white arcade cabinet branded with the Two5six logo stands on the stage, loaded with the game Arkanoid. The game goes unplayed as Warren engages with each pair of speakers. The ignored cabinet suits the mood of the day: Games are important even when we don’t play them. We might have to stop playing, in fact, in order to think about them, and share them with others. Warren expressed as much in introductory remarks to the conference. ““If games don’t build bridges,” he said, “they’ll always be an island.”

Those up on stage and those in the chairs listening resemble more of an archipelago: many disparate pieces of a larger, contained whole. During a break I anticipate the need for water in this metaphor and dutifully respond. While clutching an unopened bottle of Poland Spring to my chest with a forearm, I finally screw the cap loose and the pressurized water explodes everywhere. There’s moisture on the merchandise table, damp spots down my shirt, a puddle forming at the shoes of a taller man I can’t yet see as I mop up the mess. I stand and apologize, then spy his name tag: Steve Gaynor, writer and designer of Gone Home, and due up on stage soon.

“Oh!” I say, then, “I love your work,” then, “I’ll shake your hand later when mine’s not so wet.” He smiles and steps daintily around my own little patch of ocean. Not all floating bodies find connection to the mainland, after all.

The session directly after lunch is called “Working with Wearables.” DIY maven Becky Stern of Adafruit, an educational electronics manufacturer, and Kaho Abe, game designer and Artist in Residence at the NYU Game Innovation Lab, are onstage and glowing. Stern’s bracelet is a pulsing racetrack of light. Abe wears a spiked, sparkling glove, the lovechild of a mace and Michael Jackson’s Moonwalking hand-wear.

Warren asks them about their work and their vision of the future. He keeps saying “wearables” but it sounds like “werewolves.”

He asks Abe, “When did you get started with werewolves?” Her first project was a glove with mini nodules that controlled an MP3 player. Ten minutes go by before the spike-laden glove on her arm is mentioned. Each spike includes LEDs that flash every so often; Abe explains the glove is charging up, and would build up to shoot a laser had she not disabled it, afraid she’d blast someone in the eye. More importantly, the glove gives her confidence, allowing her to be speaking on-stage in front of hundreds of strangers. Warren nods. “How do you define werewolves?”

The next session is Space and Presence. Gaynor is up on stage, his shoes glinting with droplets, alongside Jake Barton, founder of the group responsible for the 9/11 Memorial and Museum, opening the following week. Barton sits crosslegged, revealing fantastically color-striped socks. Gaynor explains how Gone Home came about by removing everything they could from Bioshock, a series he’d worked on before co-founding The Fullbright Company. “The shape of the space,” Gaynor says, “is the shape of the story.”

Eighty-six professional lights hang across five tracks in the ceiling. A balcony looks over the stage, inhabited by latecomers or those who like to stretch out. Pairs of black rectangles lean against the wall, built from unknown material and almost the exact proportion as the monolith from 2001: A Space Odyssey. I ask around. No one seems to know their origin or purpose. Maybe they cover up the large windows and keep out ambient light. Maybe they help absorb sound. Maybe their uses are unnameable. Maybe they are there to be questioned, to simply spur on the seeking of answers.

At the side of the stage, a photographer takes a quick break from shooting. He’s eating a donut with a fork. This is the kind of donuts we’re talking about.

These are the kinds of ideas we’re talking about. Someone on stage mentions “bionic storytelling.” A question comes up: “How do you make a game out of GPS-tagged sharks?” We hear the story of Maurice Ashley, first African-American Grandmaster of chess, who also teaches chess to kids, and one lesson is to have these eight-year-olds play a game while manually logging every move they make, and then they hand Ashley this list, and in ten seconds he can tell you the story of the game. He once asked one of the kids about a certain move, then asked what they had for breakfast.

The kid didn’t have breakfast. Ashley said, “You’re playing like a hungry person.”

The story is Kevin Slavin’s, co-founder of Area/Code and Assistant Professor at MIT Media Lab. Slavin knows why Ashley is the best at the game he plays. “He understands the game of chess. But he also understands people.”

He says this while standing with the help of a cane. He hurt his back recently and can’t sit down. The chairs have been replaced by high stools. His session-mate Miles Ludwig leans against one while talking. Warren elevates his desk (made by Humanscale, a Twofivesix sponsor) like an extendable mic stand, and stands for the twenty minute period. The shape of the space is the shape of the story.

Later, at an after party at ACME Studio in Williamsburg, rain pours down in sheets while a warehouse used for photo shoots and prop-storage fills with people playing Oculus Rift for the first or twentieth time. The walls are lined with taxidermy. A DJ spins music in front of an occasionally attended dancefloor, while a back room glows ochre from a 1995 store display for Nintendo’s Virtual Boy. Already inside, we stick our heads into closed-off goggles; now we’re jumping from a building, now we’re on an all-red tennis court, now we’re shrunk down and killing computer viruses. Near the end of the night, Jennifer Hale, conference speaker and voice of so many virtual heroes, comes in from the storm. She says how beautiful the rain is. She then turns and goes back outside, closer to all that falling water.