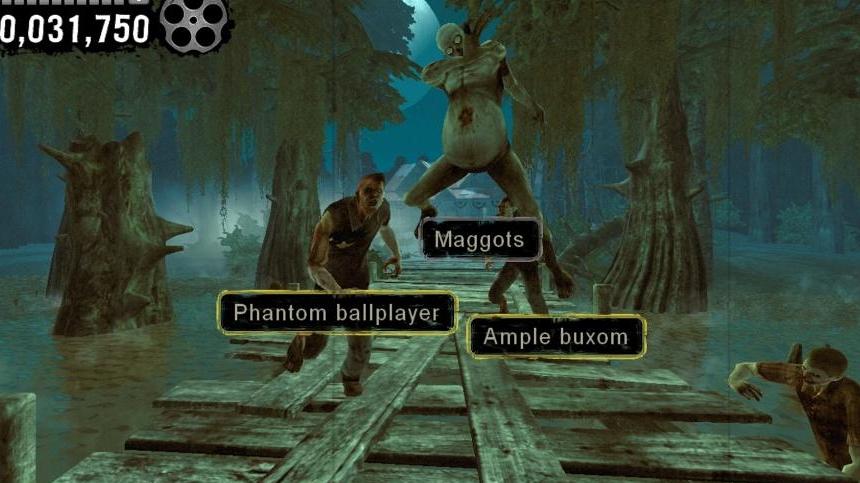 Title:
The Typing of the Dead: Overkill

The Typing of the Dead: Overkill is decadent and depraved.

“Overkill” may be the perfect descriptor for just about everything in this game. It’s a grindhouse film overdosing on testosterone, shooting zombies in the head while shouting situation-dependent one-liners as delightfully tasteless as Mr. Freeze’s “All right, everyone: chill.” It’s loud, irreverent, and, far more often than not, self-consciously campy. It out-curses Quentin Tarantino, out-guns Robert Rodriguez, and does it all with less tact than Rambo. Would it surprise you if I told you this was an educational game?

The original Typing of the Dead came out for the Dreamcast in 2001 and, as badly acted art about zombies often does, became a cult classic. It was a modded version of House of the Dead that replaced the original game’s guns with keyboards and its bullets with keystrokes. The Typing of the Dead: Overkill is much the same as its predecessor in that it’s a modded version of House of the Dead: Overkill, though, tragically, its protagonists wield guns instead of keyboards this time around.

As a typing teacher, Overkill isn’t great. And that’s okay. Its hands-off approach to teaching seems appropriate since this game waves its M rating around with all subtlety of a slow-motion headshot. Dismemberment, disrobing, disinterment, and disregard for social progress is the norm here. I would sincerely hope that kids aren’t learning where the semicolon key is by popping skulls in Overkill. But, for somewhat experienced typists who can stomach the satire, it’s more like a typing test you can retry as many times as you like, either for high scores, or, on the hardcore difficulty, the satisfaction of passing a twenty-minute zombie rush without making a single typo.

This is not a shooting game so much as it is a series of exquisite corpses.

But as you progress, something strange occurs. On the third difficulty setting (calmly referred to as, “motherf***er,” asterisks and all), you must kill the first zombie you encounter by typing the word “brains” before it hits you. This makes sense. “Brains” is usually one of the only words zombies say, if they speak at all. At this point, your worldview remains intact: “I am playing yet another zombie game”, you tell yourself. “I will kill many zombies. I have done all this before.” What slowly starts to dawn on you, though, is that Overkill has just as much to do with surrealism as it does with grindhouse zombie films. This is not a shooting game so much as it is a series of exquisite corpses. Words appear in sequence, in pairs, in phrases, in swarms. They all mean something independent of one another, but trying to figure out what they mean when they happen to be together is the real game of Overkill, just as it was for Breton.

After you’ve typed “brains,” single words start coming at you fast and furious, pinned like marathoners’ numbers to the zombies:

As your hands type, your mind is free associating, trying to impose meaning and order on the semantic monsters the game keeps throwing at you. Sometimes the words are funny in combination (e.g. SAD, CLOWN) or in isolation (e.g. BLUBBER). Sometimes they’re funny because a zombie seems to be saying it (e.g. VIVACIOUS). But then the phrases start to appear:

You type. You recognize these as complete thoughts. But then you wonder, “Why these words? Why now? Are they commentaries on death? The experience of being a zombie? The experience of being human?” They offer no answers on their own terms, and the number of possible answers grows with each new phrase. You barely have time to read. You have less time to react. You cannot question. (Who would you even ask?) You type:

HELP YOU HELP YOURSELF

Meaning vanishes in the absence of context. We see fragments of truth shoehorned in here, scattered among the wreckage of abandoned sentences, aborted essays, crash-landed designs. None of them are nonsense on their own, but together they stray toward Dada. Is this a test of my relation to these keys, this machine, games in general? Why are these words capable of killing? No time. Read. Type:

SHOOT THE OTHER BLOKE

You laugh. But you get hurt when you laugh because you did not type. So you stop laughing. You fingers tap out:

Amidst this barrage, the plot makes both more, and less, sense. It’s a sort of void swirling with biceps and shotguns, hordes of faceless zombies, forgettable action movie set pieces of hospital, train, and military bunker. You are an agent from an amorphous government agency made real only by the fact that you have badges that represents it.

Suddenly, you find yourself in a still-cold meat locker. There, you face a butcher-turned-monster with a cow’s severed head wielding a butcher knife. It could have meant something. It could have told you that when guilt overcomes you, sometimes guilt becomes you. Instead, it shouted, CHANCE ENCOUNTER, when you knew full well that chance had nothing to do with it. Are lobsters actually fancy crabs? Is clearing your cache good advice? Was that zombie the red herring, or is RED HERRING the red herring? More shuffle toward you:

CRAP THEY HAVE GUNS

Now you’ve got it. It’s performance poetry: You’re thinning the herd by following the game’s advice to the letter. The pen isn’t mightier than the sword—the pen is the sword. Maybe it’s a meta-commentary on this game: Acknowledging that CRAP THEY HAVE GUNS fires those same guns, making them real. Or it’s a commentary on modernity: We willfully go OVER THE TOP to see what’s over the next peak. But is ILL-ADVISED TWERKING the niche, or is Typing of the Dead? No, wait, it’s all got to be an anagram. It’s a parable. It’s a portrait of ADHD.

GUERRILLA IN THE MIST

PUTTING WORDS IN YOUR MOUTH

SUDDENLY IT ALL MAKES SENSE

And then, suddenly, it all makes sense. You remember this is a typing game. It’s a teacher taking you out of your comfort zone, making you do what you thought you couldn’t do faster and better than you used to be able to do it. You doubted, you failed, but eventually succeeded. And yet, if you succeed, your only reward is more of this clichéd movie filled with meaningless “shortcuts” through dark swamps, zombified strippers, train-top battles with gigantic insects, and Lynchian villains with next-level Oedipal complexes. None of it makes sense outside of the singular need for the story to advance, the game to continue, you to type. “Why not?” is the plot’s only internal logic.

At the carnival, you must chase the bad guy into the haunted house ride, one of those minecart numbers with shuttered doors and automated spookiness. You get in the cart, and realize that you’re stuck in an on-rails haunted house inside of an on-rails haunted house. Now the game’s awareness of its artifice is bashing your skull in, feasting on your brain. Its plot has spent all its effort trying to telegraph its moves, its attack patterns, all the better to show you what it is you’re doing while you’re playing this game: trying to write in connections between unconnectable nodes.