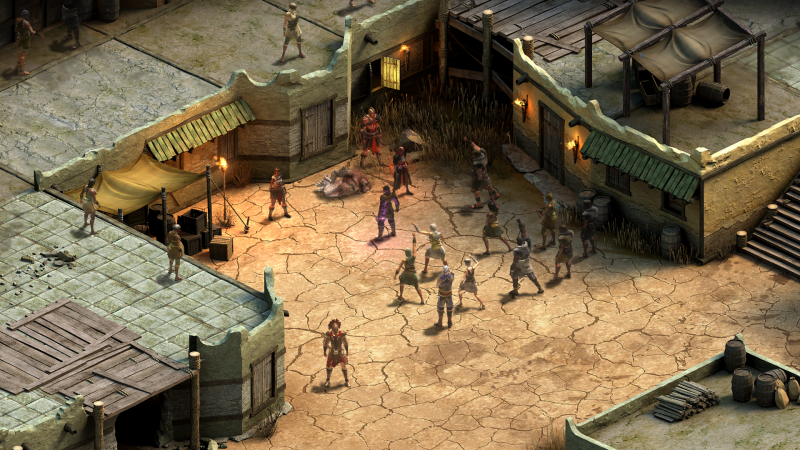 What happens to the world after war? Obsidian Entertainment’s upcoming role-playing game Tyranny is interested in exploring that dilemma. Taking place in a fantasy realm sat right in the middle of the Bronze Age and the Iron Age, the game begins after the evil dictator Kyros the Overlord has united the world under his grasp. Players take on the role of a Fatebinder, destined with restoring order to the lands in the wake of the largest war the region has ever seen.

But the Fatebinder isn’t an outcast, barely scraping by a living in the lowly Kyros Empire. No, unlike such RPGs as Dragon Age: Origins (2009) and Fallout (1997), the Fatebinder serves on behalf of the Overlord, wielding a significant amount of power at her command. She can engage in diplomacy, violence, cruelty, or a mixture of all three at once. The world is at her grasp, and as a force aligned with evil, she has the option to be as fair as she so deigns.

what kind of evil holds its grasp on the throne?

“We didn’t want you to be the ‘errand girl of Evil’. If you were just a grunt or a lackey, your ability to influence or change the world would be limited, and your responsibility for the fact that evil won would be reduced,” Tyranny director Brian Heins said in the game’s debut developer’s diary. “This required us to design our quests and content to reinforce this at every turn. We didn’t want you being approached by random NPCs asking you to rescue their cat from a tree. Your choices shape nations, and the quests had to reflect that.”

Indeed, there’s much to shape within Tyranny’s world. Factions remain divided in the aftermath of the Overlord’s victory. Villages struggle to build a sense of stability in their community while recuperating from the war. Depending on the backstory that the player chooses—which, according to PC Gamer, can shape the structure of entire villages—the entire course of the game can change drastically. Conflicts emerge and disappear based on the story the player creates from their world, leading to a realm of possibilities to navigate as a Fatebinder.

“Ultimately, RPGs are about the choices players make,” Heins wrote. “With Tyranny we wanted to focus our efforts on making the world react to player choices—both in game systems and in dialogue.” Indeed, Tyranny is fascinated with choice. What options are available for a ruler managing a post-war region? How does the past affect the present’s stability—or lack thereof? Tyranny frets over these questions, allowing the player to tackle the world any way they choose. Of course, it’s clear that evil reigns in Obsidian’s new world; the question is, what kind of evil holds its grasp on the throne? Tyranny will let the player fill in the blank.

Tyranny is due out for PC in 2016. Find out more about it on its website.