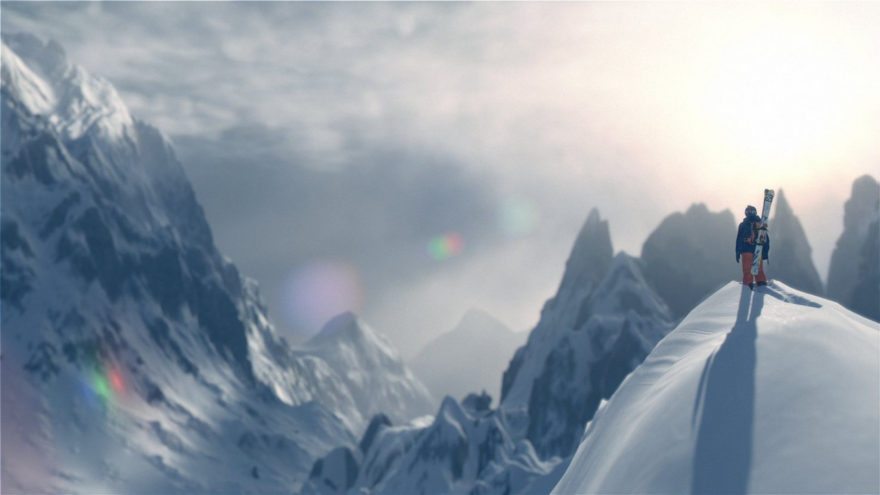 Listen. Me and heights? We don’t have what I’d describe as an amiable relationship. If you try to shuffle your house party on to the roof, I’m going to be the square making a case for couches and kitchen access. And the surge of GoPro stunt videos? I think the only reason I can white knuckle through them is because their very publication guarantees the daredevil survived. If you live your life in a flying squirrel suit just to thread the needle of a rock formation that’s the result of centuries of climate and sediment conditioning, and not designed as playground equipment, then you do you. And for the rest of us there is Ubisoft’s new extreme sports game, Steep, inspired by such acts of bravery, minus the risk of flattening your skull into the flat dimensions of a Pog.

Announced during Ubisoft’s E3 keynote, Steep is an extreme sports title that wears its GoPro and Red Bull sponsorships on its sleeves, skis, and parachutes. The trailer carries testimonials from base jumpers, paragliders, and other thrill seekers who don’t know I busted both of my legs in an accident the first time I ever hit the slopes. On the bunny hill.

terrorizing the mountain until their apprehension by Scooby-Doo

Whereas games like SSX and Tony Hawk’s Pro Skater pursued specific goals and racing, Steep’s main priority is something more nebulous and popular in the real world: bragging rights. A cross-section of why athletes film themselves and why videogame players record themselves, Steep is all about executing death-defying stunts and immortalizing them. Players can review their trips down the mountain, with skis, snowboards, and a variety of gliders, freeze time, position the camera and record. Players can band together, friends or encountered strangers, using their preferred gravity-powered method of mountain transportation, for group shots. If you’re especially proud of your work you can bookmark them and challenge other players to recreate them.

Steep seems to be designed for the players who want to stream and share, who want an audience, who feel the same desire as the daredevils strapping cameras to their forehead, minus the athleticism and odds of landing in the trauma ward. Steep is a game that could not have existed a few years ago. Point rewards do seem to be in place, if sharing and boasting isn’t satisfying for you, and players can customize outfits. In one preview we see characters dressed like a sasquatch and a hollerin’ clown, both terrorizing the mountain until their apprehension by Scooby-Doo.

If Skifree (1991) doesn’t have high enough stakes for you and actually rocketing down the side of one of Earth’s rocky nipples with death genuinely watching from behind the pillowed trees is too terrifying, Steep is due this December.