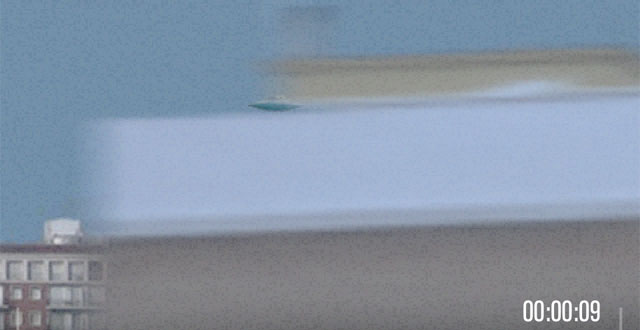 It’s a simple idea, really. A single object hovers, darts and dashes in every direction, and I am tasked with following it for as long as possible. There are no power-ups in UFO on Tape, no other levels. This is it. I’m filming a UFO.

That single task grips me. High scores are based on the number of minutes and seconds the player manages to keep the UFO on-screen by tilting the iPhone as if it were a video camera. But the real hook is the authenticity of a surreal moment. UFO on Tape doesn’t go out of its way to amp up the fantastic nature of the UFO. The featured object is simply an unimpressive floating, silver disc styled after ’60s-era alien-sighting hoaxes.

We’ve seen these things a million times. We’ve come full circle to rolling our eyes at the sight of them. But what if we looked out of our car window while riding down the interstate and really saw one of these fake-looking UFOs outside, hovering in the sky?

Your female friend asks in the game, “Are you recording?” and exclaims, “Oh my God, it’s so cool!” She’s there to provide guidance—by telling you which way the UFO has gone when you lose track of it—and to provide a crucial kind of companionship. This is not the kind of thing you keep to yourself. The UFO lacks the awe-inspiring quality of a sunset or a waterfall. But we haven’t seen it before, and we don’t understand it. Like birds falling inexplicably from the sky, or a snowstorm in the South, it takes on an element of the surreal. Those are the sights that we stop wondering at and start sharing with others. We crowd-source these discoveries.

UFO on Tape has that same quality. It’s the kind of game you won’t spend hours playing, and it won’t surprise you or delight you past the first minute. Still, you’ll feel an irrational kinship with those on your Game Center leaderboards. You’ll want to show off the game to your other friends, because it’s something you haven’t seen before.

Some of my friends aren’t impressed. “Is that all it is?” they ask. I can’t deny that the gameplay is sparse, with only one task and one difficulty level. But the experience of taking in that sight—and attempting to focus on it just a little longer—sticks with me. On my own, I try to beat my score, back out of the app, and tell myself it’s time to move on.

But when I show the app to one of my friends, it’s the social experience that pulls me in. The disc, seen in a sky so closely resembling our own, precisely by being such a simple and mysterious object of focus, has captured our imagination. The flying object is unidentified. It could destroy us. But for now, it’s just flying around. And every day, for the foreseeable future, I’m going to get that thing on tape.