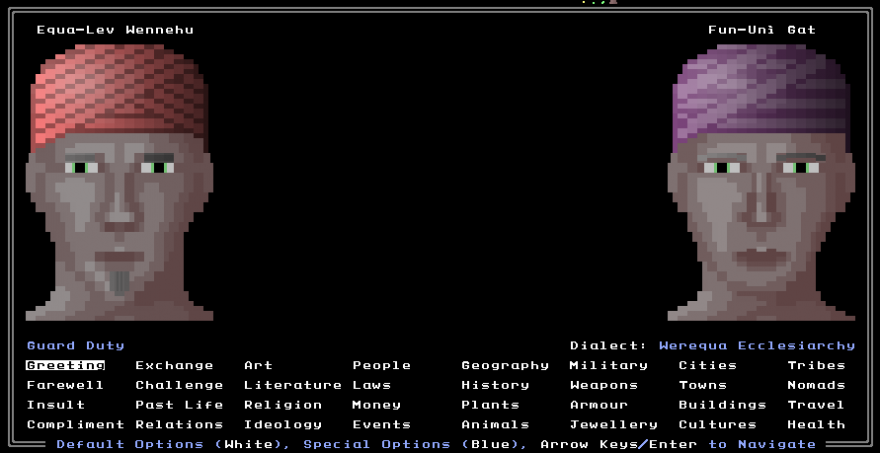 Ultima Ratio Regum, Mark Johnson’s epic 10-year roguelike project, aims to do a lot of things, but first and foremost it aims to reinvent how we approach procedural generation in lore-heavy games. The traditional view of algorithm-based writing is that it hits roadblocks between expansive possibilities and convincing humanity. Though you can program a game to offer hundreds of different choices, many will inevitably end up sounding similar. It leads to criticisms of procedural generation as “soulless,” and many doubt that computers will ever be able to create realistic humanity in such a significant manner.

differ speech without ignoring the small idiosyncrasies of humanity

But Johnson’s experiments with Ultima Ratio Regum have taken leaps and bounds to remedy that. In the years that he’s already spent working on the game he’s dissected language to its essential components and dedicated hours to figuring out ways to differ speech; keeping it compelling without ignoring the small idiosyncrasies that mark all human beings. He has created systems that account for dialect, isolation, cultural biases, religious influence, and more.

For example, Johnson has split dialog into four distinct influences: sentence complexity, education, patience, and privacy. In addition to evaluating what information a character will know, these affect how long their sentences will be, what word choice they will use, how long they can tolerate pointless questions, etc. It attempts to combat the repetitive clicking of most RPG conversations. In Ultima Ratio Regum, a guard won’t be willing to sit through six instances of asking where the prison cells are, a beggar isn’t going to respond to your brief greeting in flowery language, and characters may choose not to disclose information that they already know.

But Johnson’s isn’t the first one to experiment like this. For every innovation that he’s made, another exists unnoticed, draped in a genre too preoccupied to acknowledge its boldness. Yes, procedural generation is a first, but games have always tried to layer exception upon exception. A gender bias layered upon a racial bias layered upon a class bias provides just as tailor-made writing as procedural generation could—language was dissected into these parts long before Johnson came along. But to combine them is an ambitious goal: for humanity to not just be written, but be created, by something digital is still a theoretical idea.

It makes sense that, once broken down into sufficiently small parts, humanity could be replicated by a computer. The irrationalities of culture, dialect, and superstition can be approximated. Ultima Ratio Regum only seeks to prove their version of humanity is possible.

Johnson’s comprehensive devlog can be found on his website.