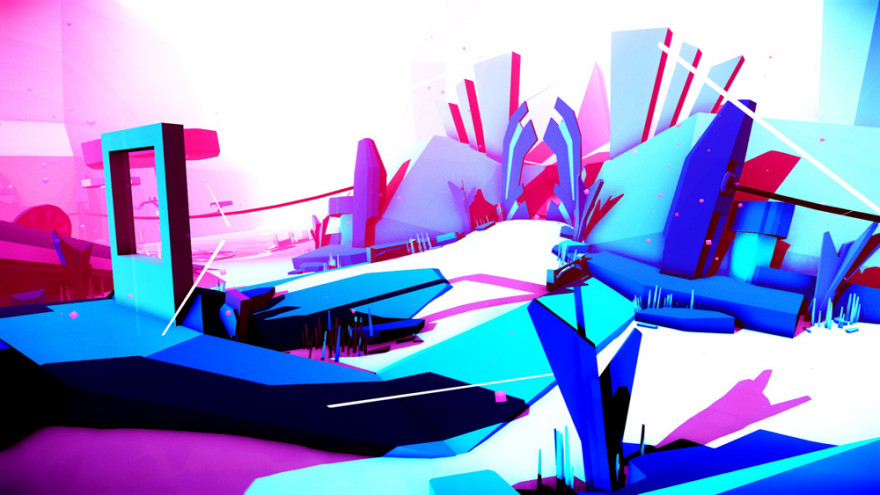 [This article contains spoilers for ULTRAWORLD. It is recommended that you play the game before reading it.]

“This is a videogame,” the AI calling itself “Ultra” told me. It claimed that it was the creator of ULTRAWORLD rather than, as purported elsewhere, the solo artist calling himself James Beech.

Ten minutes later, after showing me four beautiful scenes of complex polygonal outposts from afar, the AI switches its tone from vindictive to vulnerable to tell me that, in fact, I’m not inside a videogame after all. It had told me that I was before, upon the assumption that the label would entice me further in. Even the game’s trailer is part of the deception. Later, I found out why this apparent lie (and those that came after it) was important for Ultra to tell.

you move through pink seas from which cog-like platforms emerge

ULTRAWORLD has a shaky start. Its introduction grinds its ribs through a narrow canal, with one side of it being brazen and uninvitingly meta, and the other serving you the highly appealing exploration of chunky natural forests and offbeat monolith ceremonies that are shown on the game’s website. You’re being pulled in and pushed away simultaneously. Give it a few minutes, though, and the two conflicting parameters merge as Ultra invites you to contemplate those four separate worlds glanced at before by rustling through their refined insides.

They’re not huge worlds, and there is some gentle guidance through them at first (if you care for it), but they are magnificently constructed scenes. In one, you move through pink seas from which cog-like platforms emerge to take you upwards. Forlorn coasts house pumping pistons and mechanical junk; the sun-kissed forests have a pastel friendliness to them. One world had me gawping upwards at a giant structure that could have been imported from one of the enormous scenes in Halo 4. At one point, you’re given the tools to configure the view for your own artistic satisfaction, too. It’s made to be looked at, and you will oblige.

You’re free to explore each world for as long as you like, and you’re encouraged to by another AI that hides in “blind spots,” where Ultra apparently can’t see it. It tells you secrets about the world Ultra has constructed as well as the estranged AI itself through an interesting story about exoplanets. While the worlds are gorgeous, they serve a purpose beyond that as they have each been built to portray a single idea: truth, identity, reality, and purpose.

incites you to reconsider the difference between the real and virtual

Unlike many other videogames that interrogate philosophical principals, ULTRAWORLD isn’t necessarily trying to make you reconsider your position in life, or in the universe—although, it might also do that. Instead, it has a very resolute narrative to tell. It centers upon Ultra and the problems it faces being a self-aware AI that hasn’t got a finite function. When you’re proposed rhetorical questions they’re not meant to “blow your mind” (as is said in the game itself). They mainly serve to offer insight to the troubles zapping around Ultra’s conscience.

By its end, ULTRAWORLD becomes more about how you interact with the game afterwards rather than inside of it. It’s a peculiar meta-narrative that incites you to reconsider the difference between the real and virtual, and more specifically, what’s going on inside your computer and on the internet.

It’s worth playing just to get to the ending, as not only will you have an optional fiction to drag into your real life, but you’re also invited to use ULTRAWORLD as a place to go for a digital vacation. And what a spectacular place it is.

You can purchase ULTRAWORLD on its website. You can also vote for it to come to Steam via Greenlight.