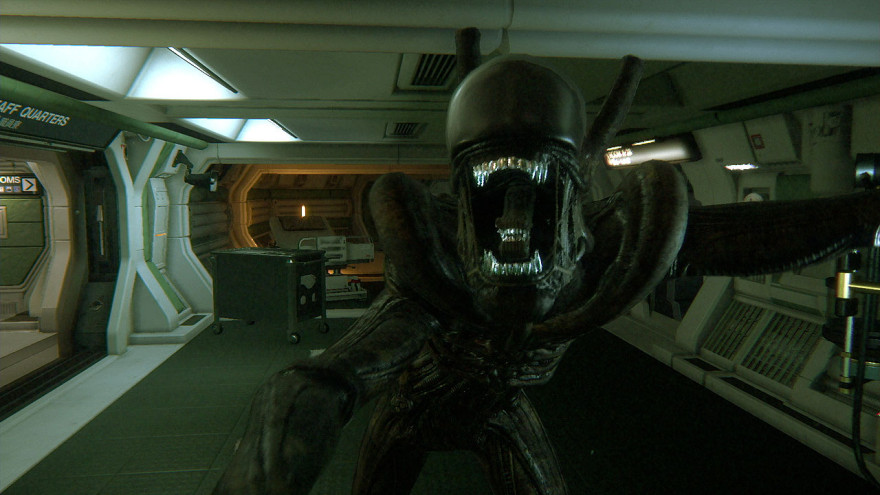 There are two things to know about Alien: Isolation, the Creative Assembly horror game from earlier this year based on the long-running Alien series of films. The first thing to know is that it is really, really, really good-looking. The gone-to-shit space station you explore is bafflingly dense and lived-in, and the set designers keep finding ways to transform it, from the familiar corridors of a cockpit and mess-hall to wider business and shopping plazas—riffs on Ridely Scott’s aesthetic, confidently played. All retain an ironclad sense of late-70s retrofuturism; if that whole space<—>no one hearing you scream thing weren’t already such a good tagline, I’d suggest “all analog everything” as a possible alternate, at least for this game.

The other thing to know about Alien: Isolation—and this is probably what you already know, since it has dominated the conversation since the game’s release—is that it’s really, really difficult. There are no checkpoints (except at the beginning of missions, which are sparse and not useful), supplies are scarce, enemies are multitudinous and much hardier than you, and you will die cheaply and frequently and upsettingly. Pretty much everything you get that might be helpful sucks: your gun sucks; the map, hoo boy, does it suck; the motion tracker sucks; the flashlight is really good but it attracts enemies, and so sucks; even the trusty ol’ videogame shotgun is ineffectual when you want it to be. I’ve been playing the game on hard, but I hear that easy mode is just as impenetrable, and I imagine that is correct. Alien: Isolation absolutely does not fuck around.

So Creative Assembly’s announcement today of two new difficulty modes doubles down on both of these virtues, depending on your vantage point. And, for real: if you’re otherwise not going to play this game, do it in the new novice mode! A less aggressive alien that you can hide from easier, as well as weapons that aren’t totally fucking useless, would let you get to explore one of the most lovingly created game-worlds we’ve seen in 2014. Nightmare mode, on the other hand, sounds like absolute horseshit: your broke-ass motion tracker is now even more broke-ass, the enemies are harder, the flamethrower—which is a healing salve, late in the game—is less effective, and there isn’t a HUD.

In a game that absolutely refused to make concessions to the player, Nightmare mode sounds like the purest manifestation imaginable. I mean, I’m never play that shit, but I bet those who do swear by it.